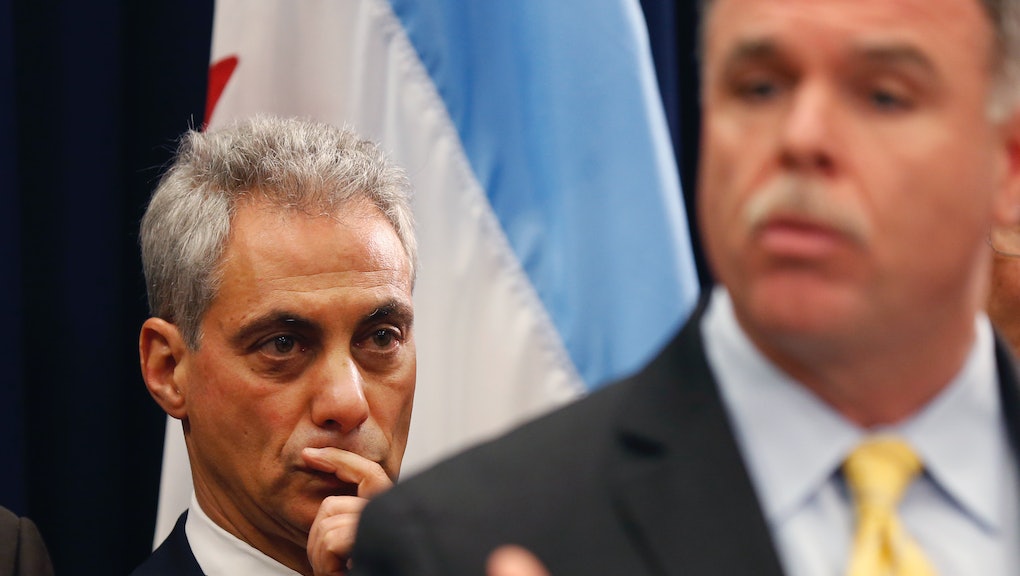 A veteran Chicago police officer was charged with first-degree murder Tuesday in the killing of a black teenager last year.

Chicago Police Department Officer Jason Van Dyke, who was on paid administrative leave pending an investigation until Tuesday, shot 17-year-old Laquan McDonald no fewer than 16 times in the city's Archer Heights neighborhood in October 2014, according to reports.

The charge comes as the people of Chicago await the release of a video recording of the incident, which was captured Oct. 20, 2014 by a squad car dashcam. Last week, a Cook County judge ordered the footage be released publicly no later than Wednesday, despite opposition from Chicago law enforcement and concerns about the video's potentially incendiary content.

The city reached a $5 million settlement with McDonald's family in April — the same month it set up a $5.5 million fund to compensate victims of John Burge, the former Chicago police commander who used torture to coerce confessions out of at least 100 mostly black arrestees.

"Police officers are entrusted to uphold the law, and to provide safety to our residents," Emanuel said in a statement last week, according to the New York Times. "In this case, unfortunately, it appears an officer violated that trust at every level."

Federal and local investigators have been looking into the case for the past year. Emanuel insisted the video be released this week, though it was initially thought the city would appeal the judge's decision.

Emanuel also attempted to meet with a coalition of black organizers from the city in preparation for the release. Groups including the Black Youth Project 100, Black Lives Matter: Chicago, Assata's Daughters and We Charge Genocide gave a written statement Monday explaining why they would not accept Emanuel's invitation (links were added by Mic):

"The mayor's office is calling on community 'leaders' to control black people's response to the execution recorded on the dashcam video to be released. It was important to deny this invitation to meet because we believe that the community has a right to respond as it sees fit. The city historically responds to peaceful demonstrations violently and recklessly. We have no faith that the same mayor that allowed people to starve for 34 days over a school, will be accountable to black people just because we respond calmly to a documented hate crime committed by a Chicago police officer. We also believe that leaders do not reserve the right to police people's emotions. Our responsibility is to organize public energy into impact."

The shooting occurred last fall, after McDonald was allegedly seen slashing car tires with a 4-inch knife, according to Chicago police union representatives. Van Dyke said McDonald — who had PCP in his system — lunged at him with the blade, WBBM reported.

The incident was witnessed by five other officers, and captured on dashcam video. Attorneys for McDonald's family have called what happened an "execution," and said McDonald was walking away when he was shot. Van Dyke said he feared for his life at the time.

Police violence against black Americans has sparked renewed protest across the country since Darren Wilson, a white former police officer, shot and killed 18-year-old Michael Brown in Ferguson, Missouri, in August 2014. Cities from Baltimore to Minneapolis have seen heated demonstrations, while at least one other video — that showing the Cincinnati, Ohio, killing of Sam DuBose in July — has raised pre-emptive concerns about unrest in nearby communities.

Detailed data is not available for 2014, but according to the Guardian, 261 black people have been killed by law enforcement officers this year. In Chicago in April, off-duty police Officer Dante Servin was acquitted for the 2012 shooting of Rekia Boyd, whom he killed when he fired his gun into a crowd of young people.

The city of Chicago has spent $500 million on costs and settlements stemming from police misconduct over the past decade. The Chicago Tribune reports Van Dyke is the first Chicago police officer to be charged with first-degree murder for an on-duty incident in 35 years.