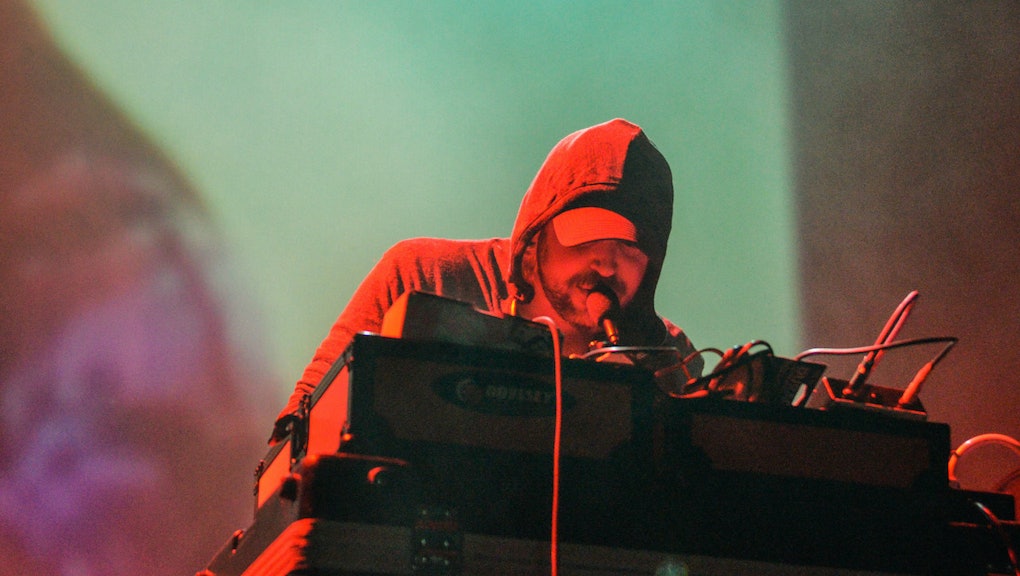 For just over 10 years now, the Pittsburgh-based Black Moth Super Rainbow have been an eerily quiet, yet pervasive presence in DIY music. Originally surfacing as an animal mask-wearing psychedelic pop-making commune of synth junkies in 2003, the group distinguished itself with a fascinating mixture of synth-pop and dark psychedelia — the junk-pop of the apocalypse. They've since garnered a wide cult appeal and several critically acclaimed releases. However, few fans would likely be able to pick out the group's ringleader, Tom Fec, in a police lineup.

Fec has been called a recluse, though he has a large enough Internet presence to sell virtually every copy of every record he releases with Black Moth Super Rainbow and under the name Tobacco (some reaching some rather steep prices, with demand for more). Last week, Black Moth Super Rainbow surprise released a mini-LP called Seefu Lilac on their self-produced label, Rad Cult. It's a popularity strategy — one utilized to great effect by artists like Beyoncé, Kendrick Lamar and Earl Sweatshirt. Fec seemed to poke fun at its trendiness with the words he released with on Facebook: "no glam shots, no press releases, no problem, the new bmsr mini-album only on Rad Cult, label to the stars."

Despite the diversity in sound, Seefu Lilac's nine vignettes are all tied together by the nostalgic, otherworldly, dystopian ineffable thing that distinguishes Fec's music. He took some time to try and describe it for Mic, talking about Seefu Lilac, the pros and cons of being a DIY musician and the influences that fuel his nuclear junk tunes.

Mic: You're accomplishing what a lot of musicians are marveling at right now, being self-recorded, self-released and maintaining a devoted cult following. Have you considered taking things in a more official direction, like with a major label's financial backing, to push your music out there?

Tom Fec: Not really. In the beginning it was out of necessity. I think I've probably told this story before, but when we were doing Cobra Juicy, I couldn't get signed by anyone. No one was interested, actually. I tried on that one. Not that I would necessarily have just jumped at [a deal], but I just wanted to see what we were worth. And nobody wanted it. So I kind of had to do things my own way, and that's probably how I'll do it from now on, because I don't know, it just works.

Cobra Juicy's Kickstarter was really successful. It must have been a difficult process figuring out how to release it without record label attention. What do you consider successes of that project? What did you enjoy the most about coming out with it and crowd sourcing it?

TF: I guess this isn't the most healthy view of things, but when you have a bunch of labels telling you that you're not worth anything, and then you make all that money [laughs]. I mean, I actually sat in some meetings with labels and they told me how much a lot of their artists sell, and I was like "Oh my God, that's really not that much." So I think for me the biggest success is: Look at what [Cobra Juicy] did, you can go to that Kickstarter page — as long as it exists — and it will always be a reminder for how much money that thing made, which was only a fraction of what it did.

Yeah, like I said, it's probably not the most healthy answer, it's a little negative, but I don't know, it felt good.

"Not everybody, but a lot of the music just feels so desperate, and maybe that's just my perspective ... I don't have musician friends and there's probably a reason for it."

Most of the time, for me to take people out, like on tour and stuff, I'm usually friends with them first, and that's why I like to bring people you haven't heard of, because we have a good time. I'd rather use what I have to help bands who aren't getting much help rather than play into the whole game. All the labels that turned me down and didn't want to sign me those are the same labels that always want me to take their bands out for support. It's like, yeah, I could do that, I could do remixes for you, but I'd really rather not. I just think there are just people more deserving. And that doesn't mean in any way that most bands are bad ... it's just sort of where I sit.

Maybe I am kind of a recluse, and maybe on the island I am on I don't have the greatest perspectives of everything, but that's just the way I see it. I don't know, that's a hard question because I don't really feel like I relate to a lot of people.

You've said before that one of the reasons you make music is because you wanted to make things that you wanted to hear because they're things you haven't heard before. What type of sound are you looking to fashion — especially with Seefu Lilac and Ultima II Massage, which is avant-garde in a certain way — what type of ethos are you trying to create?

Tobacco: I can't really put it into words. It just sort of happens, and I guess specifically with Seefu, it was all stuff that I liked. I called it an outtakes thing. It's not stuff that wasn't good enough, it's just stuff that didn't fit what I'm sort of trying to go for with Black Moth in the future. They were just pieces that I had to get out so I could just move on and stop thinking about them. It's hard though to describe what I'm going for because I don't necessarily even know.

Seefu has a sort of familiar, older-school Black Moth sound to it, like a lot of the Extra Flavor from Dandelion Gum or the sound from Drippers. Do you see yourself ever going back to that sound?

TF: No. I can't. I mean, I think the only reason that anyone maybe thinks this hearkens back to that is because it's a little more washed out sounding and a little more damaged sounding. And I'm definitely not going for the super catchy hooky stuff anymore like Cobra Juicy, which was a total experiment in itself. Dandelion Gum doesn't even sound good to me anymore, so I wouldn't want to make something like that.

The lines between Tobacco and Black Moth used to be a lot more defined. In the last couple of years, the distinctions are still there but they seem to have bled together a little bit. Are you conscious of that when you're making songs. Do you know when you're making a song that you know its going to be a Black Moth or Tobacco song?

TF: No, I don't really know. I don't go into it like that. It becomes apparent pretty quickly, but I never go into it thinking that. I just want to do something and then do it and then whatever side that falls on.

What influences your creative process? Do you have any favorite music or movies that your into right now? Or anything that directly influences the way you create music?

Tobacco: Yeah actually...Wolf Eyes has always been one of my favorite band and I finally saw them live. I haven't seen them live in like 10 years and I just saw them live again over the summer and that was easily the greatest show I've ever seen. They're just pushing music so far. When I hear something, if I can understand how something was made its not as interesting to me. With those guys, with Wolf Eyes, I don't understand. I have no idea how they do what they do. Those guys mainly. Those guys have been the biggest influence.

"I'm definitely not going for the super catchy hooky stuff anymore like Cobra Juicy, which was a total experiment in itself. Dandelion Gum doesn't even sound good to me anymore, so I wouldn't want to make something like that."

Do you have a favorite pizza place?

TF: Too many of them. Too many. My favorite place that I grew up on in Pittsburgh is called Luciano's. They just have this one stuffed pizza that's ridiculous. I've never had anything like it anywhere else.

Is there anything else you want to tell us about Seefu Lilac or in general?

Tobacco: All that I would really say is Seefu, even though I'm calling it an outtakes record, is not outtakes. It's just stuff that I needed to get out of my head. It just wasn't really making sense for where I'm going — and I don't even necessarily know where I'm going — but that's why I called it a "mini album."

You've sort of hinted at recording/releasing a Black Moth album in 2016. Are you still writing it?

TF: I'm still slowly writing it on and off. I wouldn't expect it in 2016. It'll probably be a lot longer than that. It's taking me awhile to try to get across what I'm ... but ... they're new things. This is a different animal. I probably have one or two things that will probably be coming before that, so it'll be a minute. And I don't really have any titles for anything that I have yet, but there will be some fun stuff coming.

Check out Seefu Lilac, along with the rest of the Black Moth discography at the Rad Cult Bandcamp, and keep your eyes open for the vinyl release this spring.