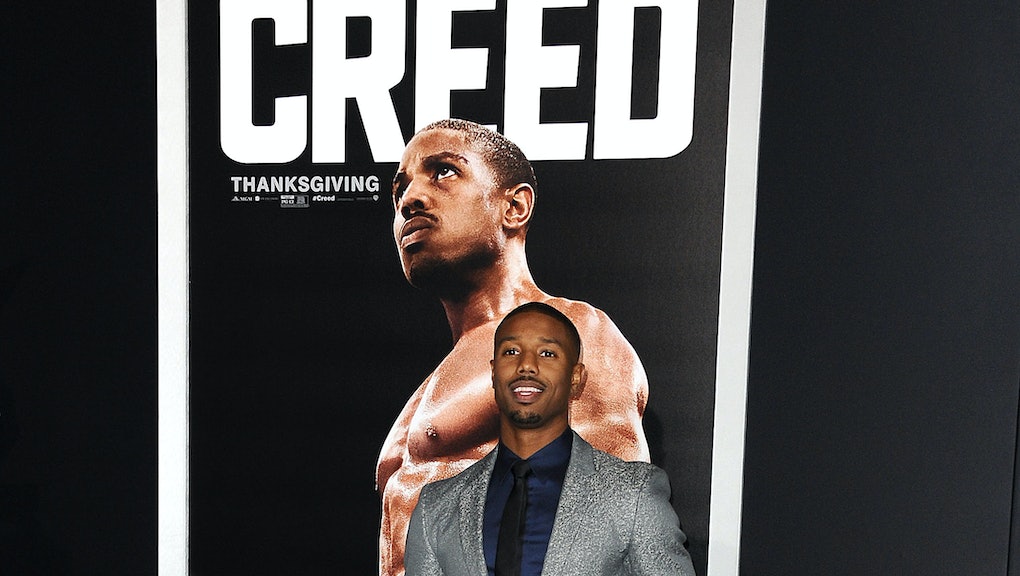 How Michael B. Jordan's Workout and Diet Transformed His Body for 'Creed'

In the upcoming anticipated film Creed, lead actor Michael B. Jordan plays the role of boxer Adonis Creed, a boxer trained by Rocky Balboa himself, played again by Sylvester Stallone, nearly 40 years since the cult classic film Rocky. In preparation for the role, Jordan told Good Morning America he went on a strenuous diet and workout plan to earn the cut muscle tone of the professional boxer he plays in the film, which hits theaters Wednesday.

"I stripped down my diet completely," he said Monday on Good Morning America. "Grilled chicken, brown rice, broccoli and a lot of water." As for the muscle, he said a quick three-a-day, 10-month workout routine did the trick. "I worked out two to two three times a day, six days a week. And ... if you do that consistently for about 10 months your body will change."

Jordan's character in the film is the son of the original Rocky character, boxer Apollo Creed, who was Rocky's enemy-turned-friend in the classic film series.

Jordan, 28, had big shoes to fill for this role, but he said Stallone's support helped ease the pressure. "I had Sylvester Stallone in my corner," Jordan said on Good Morning America. "And literally took the pressure off of me to not compete and not compare with anything that he did, you know, 40 years ago but to, you know, have your own legacy ... and kind of do your own thing."

"So physically I felt the pressure because they did such a great job back, you know, back in the day, Carl Weathers [the actor who played Creed in Rocky] and Sly, they were cut to a tee. So me and my trainer, we really wanted to, you know, set the bar pretty high," Jordan added.

Watch the trailer for Creed below: