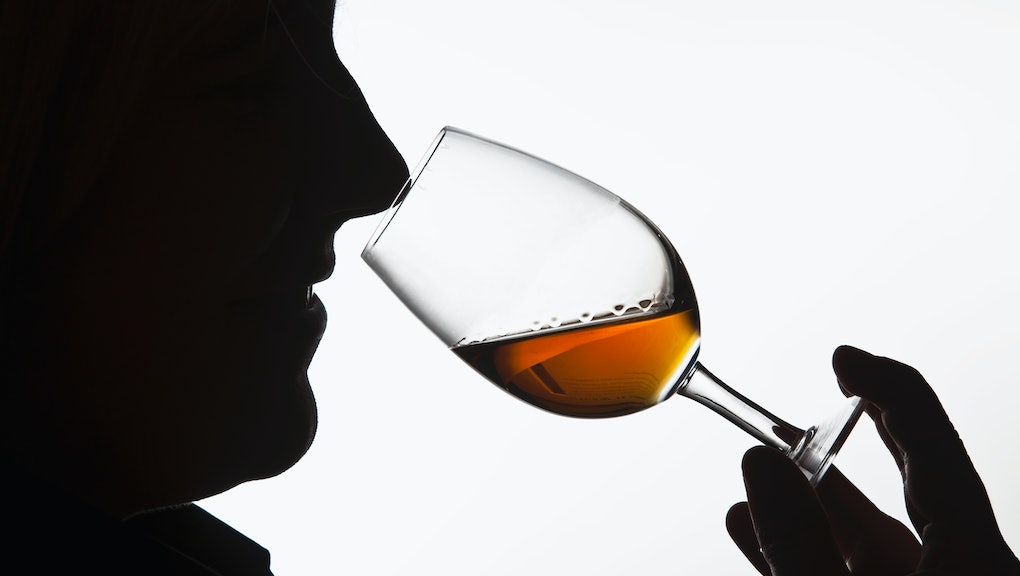 Scientists Are Making High-Tech Booze With Light Instead of Heat

Much like the romantic pursuits that often follow its consumption, drinkable alcohol usually requires heat to generate correctly. Thanks to some crafty scientists, however, the process may no longer need this sultry hand — it may just need a little bit of light.

The process: The team took a mixture of water and ethanol and added some gold-silica nanoparticles. They then aimed a laser on the nanoparticles from above which, when activated, sent a jet of light into the gold flecks. The light absorbed photons in the nanoparticles and also sent them flying, which in turn upped the temperature of the solution. The resulting light energy, concentrated near the surface, separated the ethanol from the water — the same result that occurs during conventional distillation.

"We are still applying heat, only in a different way," Naomi Halas, one of the paper's co-authors, told Chemistry World. "For the last 10,000 years we have been boiling water the wrong way – from the bottom. Here we are heating it from the top, which is much more energy efficient as we do not have to heat the entire volume of the liquid."

It's different than conventional distillation. During conventional commercial distillation, heat is applied to a pot containing yeast, water and sugar, which brings the solution to its different boiling points — 173 degrees Fahrenheit for ethanol and 212 degrees Fahrenheit for water. The resulting vapors are separated out due to their differing boiling points.

Halas and her team discovered another difference — and benefit — of their let-there-be-light process, however. The distillation systems we have in place now only allow for 95% concentration of alcohol; Halas said their system gets that number up to 99%.

"It seems likely that the highly localized heating on the surface of nanoparticles somehow disrupts hydrogen bonding within the ethanol–water mixture, allowing greater separation of ethanol from water molecules at higher concentrations of ethanol. When the experiment was repeated using propanol — a larger alcohol with less hydrogen bonding in the mixture — optical distillation produced the same result as thermal distillation."

Don't get too excited yet. Halas cautioned that due to the "mature" nature of the thermal distillation process — it's been around for thousands of years, after all — the light version probably won't explode in popularity anytime soon.

"While I think it is unlikely that this will replace conventional distillation, which is a very mature technology, it could find niche applications for new and different separation methods," she told Chemistry World. When it comes to booze, she added, "We've joked about this in the lab. But rather than moonshine it would of course have to be called sunshine!"