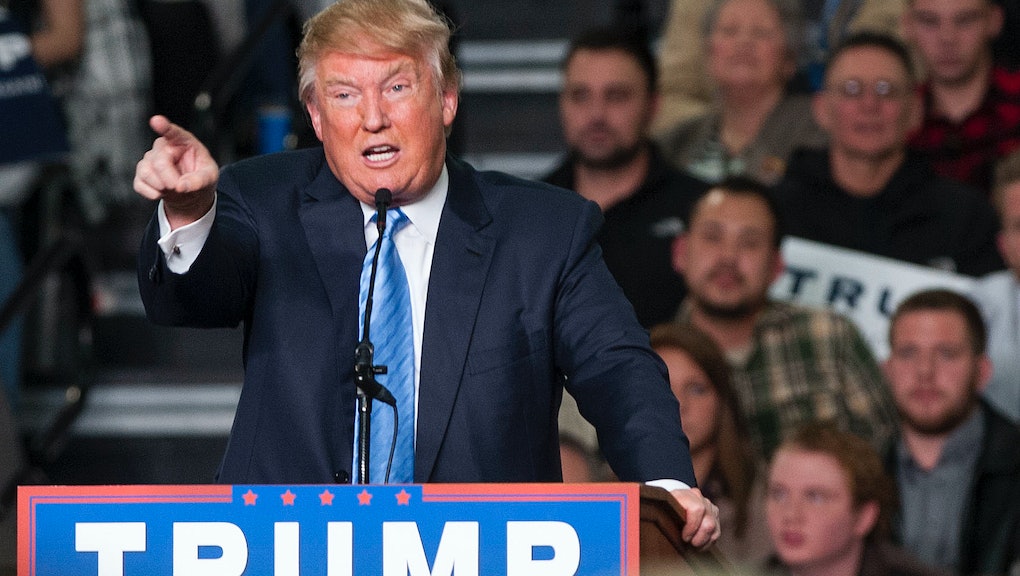 Donald Trump has taken aim at a new group of immigrants to vilify: Syrian refugees. Since the terrorist attacks in Paris, Trump has ridden a wave of anti-Muslim rhetoric to widen his lead at the top of the polls.

Responding to a reporter's question last week, Trump said the country must consider "unthinkable" responses to prevent terrorism in the wake of the Paris attacks, including setting up databases to track all Muslims in the United States. Those comments came just days after he declared that the U.S. should consider spying on or shutting down mosques to prevent the "absolute hatred coming from these areas."

After a period of several weeks in which he saw his lead atop the Republican presidential field threatened, Trump is surging once again — this time with Muslims, not Mexicans, in his crosshairs.

But portraying Trump as a manipulative villain with the power to substantially move public opinion misses a crucial point: Trump's positions on refugees and the treatment of Muslims mirrors the views of a large segment of the American public. Repugnant as Trump's anti-Muslim comments may be, it's important to recognize the extent to which he's a reflection of deeply racist and Islamophobic portions of the U.S. population.

What does the polling show? Trump follows polls closely, and survey after survey reveals a deep strain of Islamophobia running through American public opinion. Consider the following troubling stats:

•  Thirty percent of Republicans in Iowa say Islam should be illegal in the United States.

•  Three-quarters of Republicans and 56% of Americans overall say Islam is at odds with American values.

•  Forty-three percent of Americans admit to holding some feelings of prejudice against Muslims.

•  Over 80% of media coverage of Muslims is negative, with the majority focused on extremism.

These opinions are held despite the fact that the vast majority of Americans don't have even a basic understanding of Islam as a religion. In 2013, half of Americans couldn't even find Syria on a map. Meanwhile, 6 in 10 Americans do not know a Muslim personally, and as of the year 2000, the vast majority had never had an in-depth conversation about religion with a Muslim.

Of course, the vast majority of Muslims condemn terrorism and embrace democracy, alongside other western values like pluralism and tolerance.

"American Muslims are educationally, economically, and socially integrated into America, and they want to be," Georgetown University professor of Islamic Studies John Esposito told Mic. Esposito is the co-author of Who Speaks for Islam? What a Billion Muslims Really Think, a survey of attitudes and values reflecting the views of more than 90% of the world's 1.6 billion Muslims. "Muslims in the United States are quite integrated, and many are pluralistic in their approach to religion, saying Muslims share important beliefs with Jews and Christians and that it's important to emphasize that and to have good relations."

Who's really to blame? Collective outrage at Trump may absolve the general public of blame for anti-Muslim rhetoric, but Trump's rise in the polls really says more about us than it does about him.

"Trump reflects and is playing to significant American public opinion," Esposito told Mic. "For your average American, if you don't interact with Muslims on a day to day basis, then your experience of Islam has to deal with that small, but incredibly dangerous group of global terrorists."

Trump also doesn't operate in a vacuum. He may be the most vocal of the Republican candidates, but others have followed his lead. Ben Carson compared the Syrian refugee population to a "rabid dog running around your neighborhood," and said earlier this summer that Muslims are not qualified to be president. Former Arkansas Gov. Mike Huckabee said world leaders need to "wake up and smell the falafel" in the wake of the Paris attacks. Meanwhile, Texas Sen. Ted Cruz said Muslim Syrian refugees should be turned away, but Christians should be welcomed with open arms.

So as reports surface that the Republican establishment is ramping up a behind-the-scenes campaign to push Trump out of the race, it's important to recognize that while Trump may be the most inflammatory voice bringing Islamophobia to the surface, it is the American people who tolerate this kind of bigotry.

Unfortunately, as Islamophobia continues to bubble up, it is ISIS, not Trump, that is truly winning.