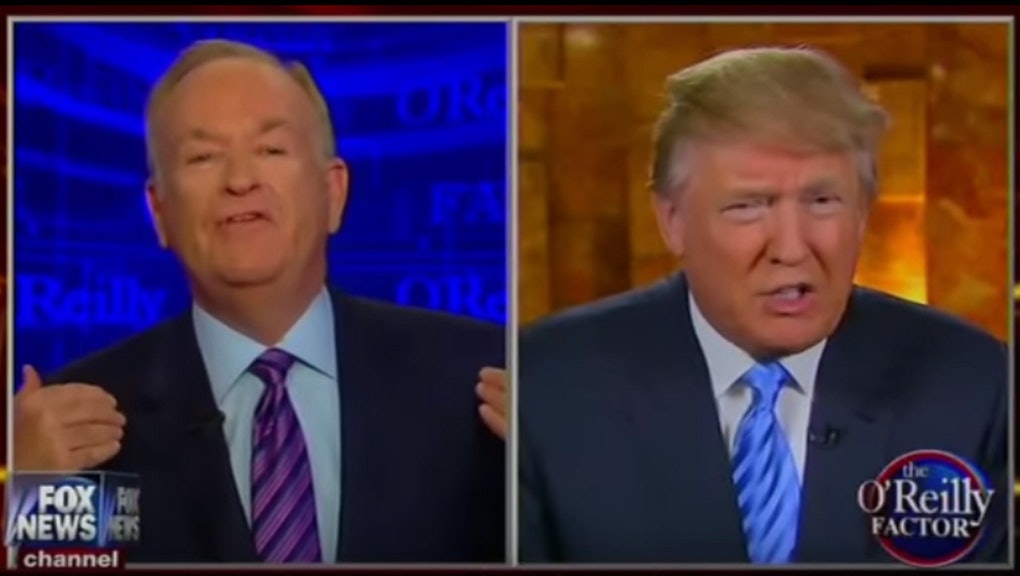 Conservative talking head and Fox News host Bill O'Reilly, who has in the past defended Republican presidential front-runner Donald Trump, broke ranks with the real-estate billionaire on Monday's episode of The O'Reilly Factor.

During a contentious discussion, O'Reilly called Trump out for tweeting fake statistics on racial killings originally compiled by a neo-Nazi, saying he had handed a silver platter to people eager to label Trump a racist.

"This bothered me, I gotta tell you," O'Reilly tells Trump in the clip. "You tweeted out that whites killed by blacks — these are statistics you picked up from somewhere — at a rate of 81%."

"Bill, I didn't tweet; I retweeted somebody that was supposedly an expert and who is also a radio show," Trump said, calling himself "probably the least racist person on Earth."

"Yeah, but you don't... Why do you wanna be in that zone?" O'Reilly responded.

"Hey, Bill. Bill. Am I gonna check every statistic? I've got millions and millions of people..." Trump said before he was cut off by an unconvinced O'Reilly.

"You gotta," O'Reilly said. "You're a presidential contender. You gotta check."

"You know what, fine. But this came out of radio shows and everything else," argued Trump to the increasingly incredulous host.

Later O'Reilly implored of the presidential candidate, "Don't do this. Don't put your name on stuff like this, 'cause it ... gives [the other side] stuff to tell the ill-informed voter that you're a racist. I mean, you just handed them the platter!"

Trump repeatedly defended himself by saying the post was just a retweet.

Incidentally, the man who originally invented the phrase "retweets are not endorsements," New York Times staffer Patrick LaForge, has since conceded that users should exercise more judgment when tweeting.

While Trump hardly helped his other campaign as "least racist person on Earth" by promoting (accidentally or otherwise) racist pseudo-statistics on Twitter, as the Republican primary race carries on, so does his list of offensive comments about women and minorities.

It's sound advice for most.