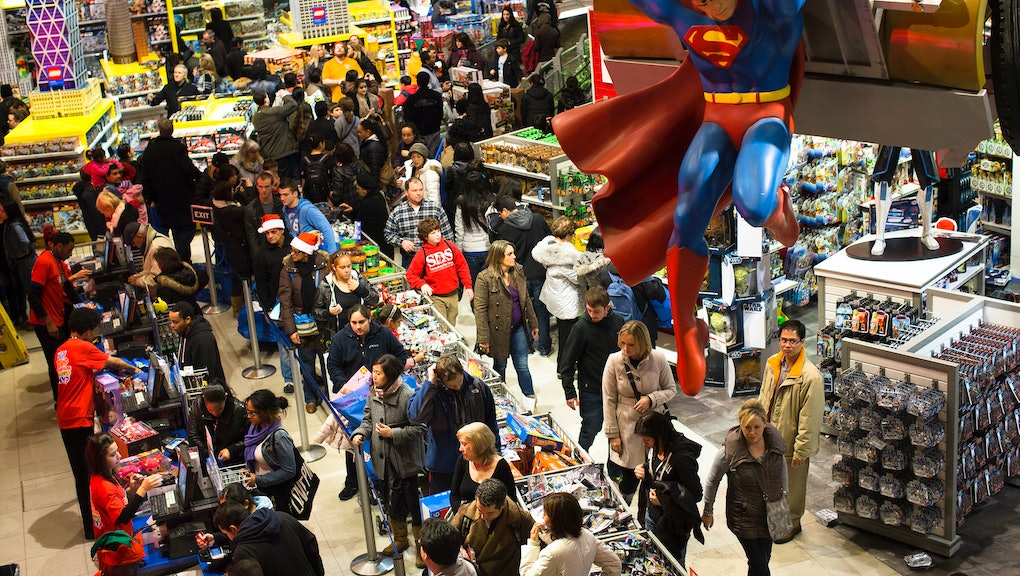 The holiday shopping season and Thanksgiving Day seem to collide into each other more fervently with each year, as stores across the country are beginning to remain open on the national holiday as well as expanding their hours into the night. Customers hoping to be the early worm for this year's Black Friday can gobble up their turkey early and head out to a number of major chains offering holiday shopping hours on Thursday. Here's which stores are open on Thanksgiving, from Wal-Mart to Best Buy, Kohl's and more.

Though most national chains are remaining closed throughout the day, stores like Wal-Mart, Target, J.C. Penney, Best Buy and Sears are opening their doors to customers Thanksgiving afternoon. For anyone hoping to enjoy a second serving of turkey — or third, for that matter — and care for their food baby from the comfort of their home, fear not: Sites like Amazon and eBay are offering a variety of deals on Thanksgiving.

Below are store hours for several national chains opening up on Thanksgiving:

Wal-Mart: Wal-Marts across the nation will remain open for 24 hours throughout Thanksgiving, with Black Friday deals beginning at 6 p.m. until they're sold out.

Kohl's: Similarly, Kohl's is letting in customers at 6 p.m. on Thursday afternoon. The store will remain open until midnight local time, then reopen on Black Friday.

Target: Target is continuing its tradition of opening stores nationwide at 6 p.m. Thanksgiving and will remain open throughout the night.

Best Buy: Best Buy is opening its doors an hour earlier than Kohl's and other leading chains and will remain open until 1 a.m. The chain will then reopen its doors at 8 a.m. local time until 10 p.m. on Black Friday.

J.C. Penney: J.C. Penney will offer some of the most extensive hours for any chain store nationwide, opening at 3 p.m. on Thanksgiving afternoon and remaining open to customers until 10 p.m. on Black Friday.

Luckily for shoppers wanting to get a head start on Black Friday on Thanksgiving, most deals are being extended along with store hours. Here's the latest roundup of deals and savings.