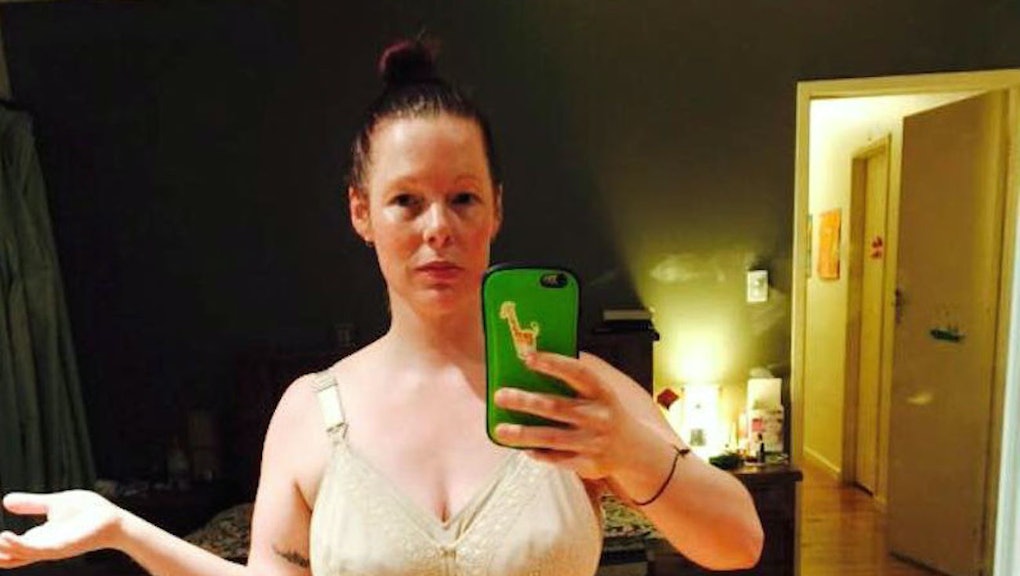 There's a great deal of pressure on women who have just given birth to immediately get back into shape and regain their pre-baby figures. But popping a yawling infant out of your nether regions is no small feat, and contrary to what Us Weekly might tell you, it usually doesn't take a few days of eating kale and doing light Pilates to get back into tip-top physical condition.

Australian mom Mel Rymill is sick to death of the pressure to lose weight after giving birth. That's why she took to Facebook to post the following photo of her in a nursing bra and panties, in an act of defiance against the post-partum body-shaming trend:

In the post, Rymill described meeting with a personal trainer after giving birth and being told, "Obviously, you want to get back to your pre-baby weight." (Mic has reached out to Rymill, and will update if we hear back.)

While Rymill clarified with her trainer that she wasn't interested in losing weight so much as regaining the strength and tone she'd lost during pregnancy, the comment prompted Rymill to reflect on the societal pressure to lose weight after giving birth.

"Post pregnant women are told they look good if they return to their pre-baby body quickly leading to the assumption that they look bad if the keep the extra weight," she wrote. "Skinny people are envied for their lack of fat or shamed for apparently starving themselves. Voluptuous women are either labelled fat and shamed or they're labelled brave for being comfortable in their own skin. There is always pressure."

To combat the notion that new moms must lose weight immediately after giving birth, Rymill posted a photo of herself in a nursing bra and granny panties."My hair is greasy, I have no makeup on, my body is squishy and plentiful, I'm not even sure I'm totally OK," she wrote. "But I am strong. My body is healthy. Hell, I am badass as fuck!"

Clearly, other women agree: The photo has been shared more than 4,000 times since Rymill posted it earlier this month.