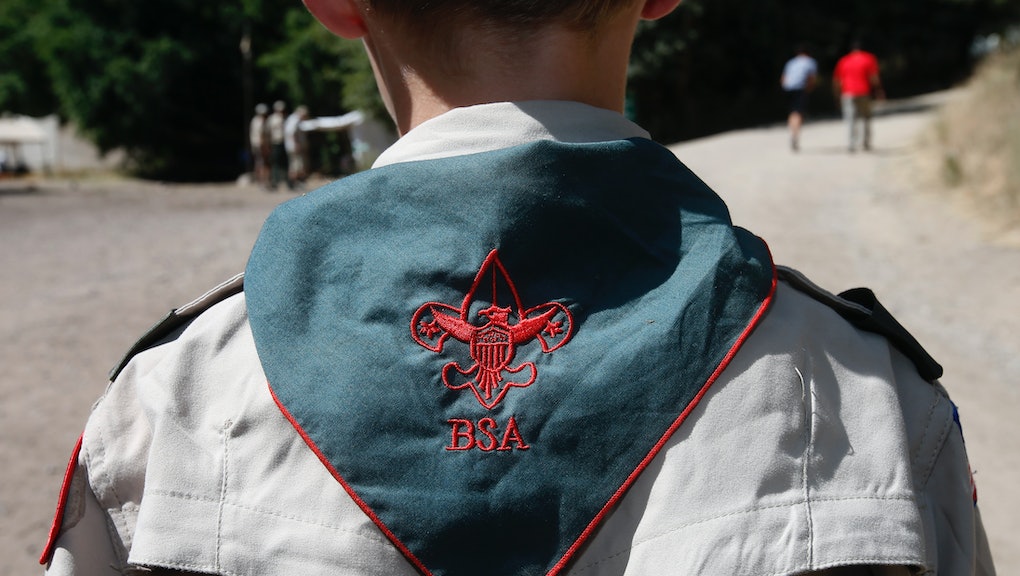 The Outdated Idea That's Keeping Girls Out of Boy Scouts

After ending a controversial ban on gay leaders in July, a new group is asking the Boy Scouts of America to open their doors — girls. In Santa Rosa, Calif., the local BSA chapter told 10-year-old Ella Jacobs and five other prospective female members that their application for membership was "inappropriate." Calling themselves "the Unicorns," the girls plan to protest the decision by attending a meeting this Friday and personally handing in their applications to Scoutmasters.

However, it's not propriety that's keeping girls out of the Boy Scouts. Ella Jacobs' mother, Danielle, told ABC News that other parents in the Santa Rosa chapter were afraid that "girls would take over all of the leadership positions."

This statement is exactly why the Unicorns' petition is important: These girls will be subjected to the stigma facing female leaders their entire lives — whether that's in the Boy Scouts, student government or Silicon Valley — and they need to be encouraged to take charge from a young age. Making the Scouts co-ed not only gives young women the opportunity to lead, but it shows boys it's OK to be led — even by, gulp, a girl.

If some men are uncomfortable with women in power, studies show they're not alone. A 2015 report from Personality and Social Psychology found that men are more aggressive toward female bosses in salary negotiations. Men ask for higher wages from women than a male supervisor and are more likely to feel "threatened" by female superiors. But a 2013 Gallup survey of men and women showed that a majority of respondents of both genders preferred to work under a man — with 35% stating a preference for a male supervisor, while just 23% wanted to report to a female manager.

When women do take leadership positions in the workplace, they are rarely rewarded for doing so. In a 2013 essay for the Atlantic, Emily Matchar wrote, "Men with high-powered jobs frequently have helpmeet wives, while few powerful women have stay-at-home spouses to help them enjoy their jobs sans domestic stress; men in authority have boys club networks, while women often find themselves lonely at the top." If surveys show that women are less likely to want to be promoted, it's not a lack of female ambition that's the issue. It's that female employees know power isn't designed to work in their favor.

This issue affects girls from a surprisingly young age. As Fast Company's Gwen Moran writes, girls who might have been outspoken in their pre-pubescent years "become more cautious about speaking out and less likely to assert themselves" as they hit maturity out of fear of peer judgment or social embarrassment. Developmental psychologists call it "losing their voice," a time when girls begin to associate popularity with being nice, polite and passive, rather than voicing an opinion that may go against the grain.

A 2008 study commissioned by the Girl Scouts likewise showed that a majority of girls valued qualities like "fitting in" and were "ambivalent" about leadership. In a CNN editorial, Rachel Simmons argued that later on, this leads to a "confidence gap" discouraging women from public office. On college campuses, Simmons writes that "female students comprise over half of the student body but only hold about a third of the executive positions in student government." And women campaigning for government positions are more than twice as likely as male office-seekers to describe themselves as "not at all qualified."

This is also known as "impostor syndrome," in which many women are socialized to feel they haven't earned their accomplishments or don't deserve their place on the company ladder. It's not just that women are made to feel that they are "frauds," but that they've been told their entire lives there's something inherently wrong with their ambition. After all, while young men enroll in Boy Scouts to become the future leaders of America — as the BSA's own website proudly boasts — young women who want the same privileges are told that it's "inappropriate."

Oddly enough, the Scouts is actually a perfect environment to combat these dangerous ideas. As the Washington Post's Amir Arnold Gharbi points out, the Boy and Girl Scouts associations might share a name, but the values they foster are very different. "[T]he Girl Scouts is a separate but not equal group," Gharbi argued. "Girl Scouting teaches youths to be strong individuals, but Boy Scouting teaches youths to be strong leaders." But unlike Gharbi, I don't think the solution is to dissolve Girl Scouts and replace it with a male model of what leadership is. The answer isn't teaching young women that being like men is the only way to be powerful.

Instead we should change our definition of what a leader is — by bringing together the lessons that both groups have to offer. In the Girl Scouts' manual, the organization stresses life skills that are important for any young person to learn — including "goal-setting" and "decision-making." These tenets stress that being a leader isn't just about tying a square knot or building a tent, but being a productive member of a group — and leading by consensus. This has long been viewed as a female style of leadership (and dismissed as lesser), but outlets like the Harvard Business Review have shown that it can be an incredibly effective and motivating style of team-building.

While exercises like "people skills" might not be exactly what Boy Scouts signed up for, we should be showing boys that the girls have a lot to teach them, too — whether that's as peers, scout members or leaders. When we let girls find their voice, we might find we have a lot to learn from them.