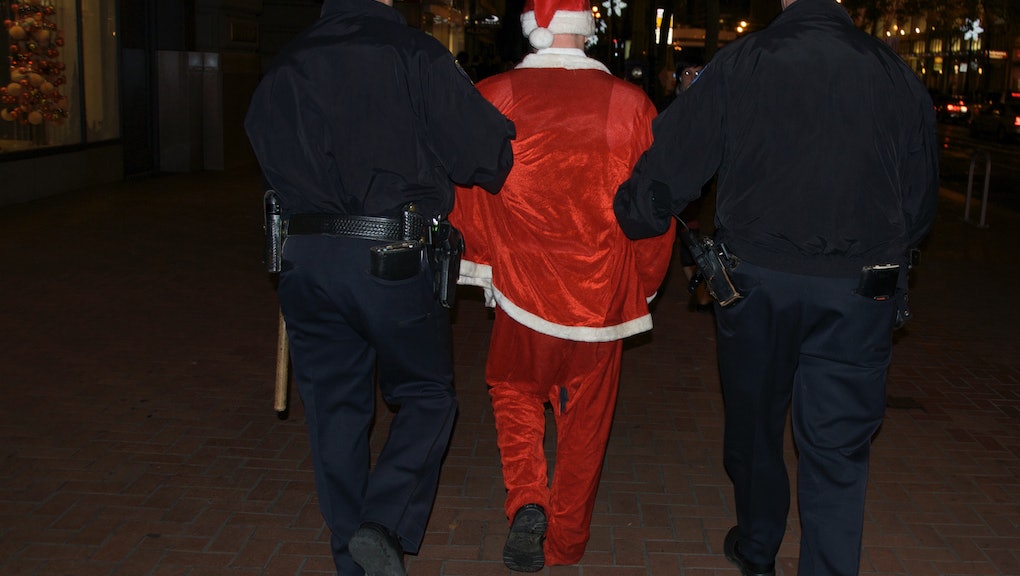 Barnes and Noble can expect a big fat lump of coal in its Virginia Woolf-etched stocking this year.

Just as the all-knowing Santa Claus keeps a running tally of which children have been naughty or nice, one right-wing group says it has the same insight into major corporations.

The American Family Association, one of the most influential socially conservative groups in the country, has released its annual list noting the stores which it believes to grasp the reason for the season, and those which are doing the devil's dirty work by going the secular route this Yule.

Retailers on the AFA's "Nice" list include household names like Amazon, Target and Lowe's. Atop the list in bold (along with the AFA Online Store) is Hobby Lobby, the craft goods store whose Supreme Court battle over whether the company needed to cover employees' birth control and reproductive health costs turned it into a darling of social conservatives.

Among those retailers that are listed as naughty are Office Max, Pet Smart, and Victoria's Secret — though few expect any tears from the lingerie retailer over its designation.

In its explanation of the project, the AFA says it created the list with the hopes of teaching retailers the importance of Christianity during the holiday season. Companies that don't use "Christmas" in their seasonal advertising are censoring Christian beliefs, declares the group.

"There are secular forces in our country that hate Christmas because the word itself is a reminder of Jesus Christ," wrote AFA President Tim Wildmon in a post to the AFA website.

"When we started [the project] our then-president Don Wildmon realized that many of our retailers had shifted away from using the word Christmas in their advertising [and] recognized that there was something basically wrong with that," the AFA's director of special projects Randy Sharp told Mic. "They're marketing to Christmas shoppers but they're failing to recognize Christmas,"

According to its website, the AFA categorizes retailers based on its own assessment of the companies' promotion or tolerance of the holiday, as well as how often the term "Christmas" is used in the company's advertising.

Among the group's many critics is the Southern Poverty Law Center, which categorizes the AFA as a hate group, and compiled quotes from AFA representatives condemning everything from homosexuality to Islam. The center says that in the AFA's mission to "promote the Biblical ethic of decency in American society," the group is simply promoting a bigoted agenda.

The War on Christmas is a battle that seems to get more and more heated with the arrival of each new holiday season. Whether that frenzy is aggravated by social conservatives seeing support for their ideologies lose steam isn't clear. But Pew Forum poll in 2014 found 72% of Americans believed religion was declining in public life, with 56% considering it a negative development. White evangelicals were particularly vocal, with 77% concluding declining public religion is a "bad thing."

But the Atlantic noted in 2013, Christmas displays remain widely seen throughout U.S. cities. The vast majority of Americans — 83% according to a 2015 ABC News/Beliefnet poll — consider themselves Christian.

"It is almost impossible to overstate the degree to which conservative media today, particularly Fox News and talk radio, are brimming with expressions of white racial grievance and white identity politics," writes the American Prospect.

Each year, talk of the so-called "war on Christmas" attracts both condemnation from conservatives and mockery from progressives.

Sharp, though, told Mic the naughty or nice campaign had successfully persuaded companies.

When the list was started, according to Sharp, 80% of companies included in its roundup fell on the "naughty" list — today, just 20% do.

That may also have to do with a vague narrative on who, exactly, is naughty or nice and why. As Right Wing Watch noted this week, a similar ranking by the conservative Liberty Counsel managed to list many of the companies targeted by the AFA on the complete opposite side of the list.

And, for all the hemming and hawing of Facebook evangelicals and Donald Trump over Starbucks's minimalist red holiday cups, the AFA listed Starbucks as but a marginal threat on the Christmas front lines. Naughty, it would seem, is in the eye of the beholder.