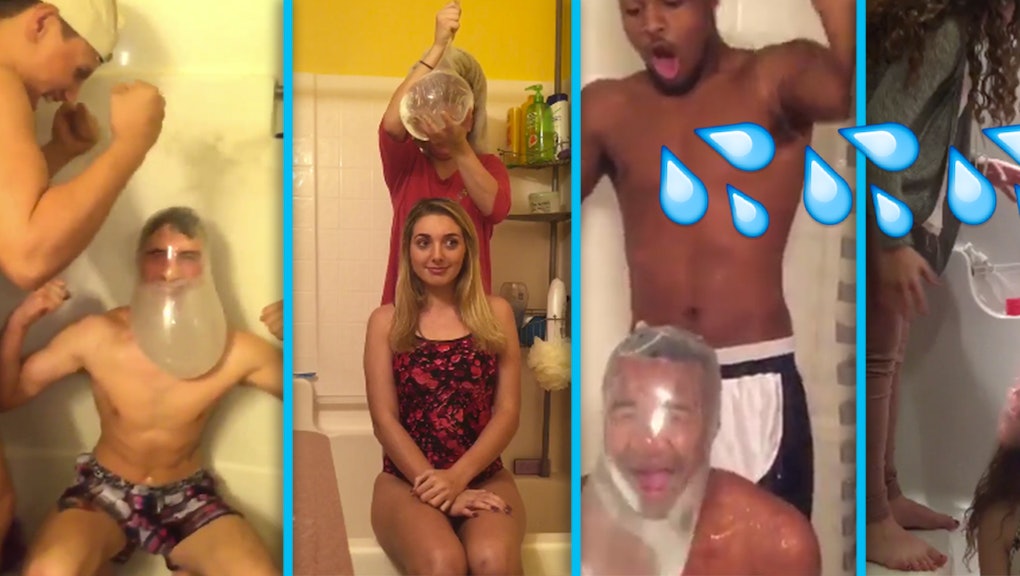 In 2013, the last time young people tried to do a #CondomChallenge, it wasn't pretty. It's 2015, however, and millennials appear to have gotten a little better at their prophylactics.

Behold the brand-spanking-new #CondomChallenge, which involves taking a Trojan, pumping it full of water, and dropping it over a brave volunteer's head, like so:

If done correctly, the condom is supposed to retain the water and enclose the person's head like a tiny rubber aquarium. If done incorrectly, it will — you guessed it — break and send a slush of water in all directions. (There's a reason all these people are wearing their undergarments and sitting in showers.)

Judging by Google Trends data, the #CondomChallenge appears to have started around Nov. 22. A simple Twitter search for #CondomChallenge yields plenty of results, most of which involve young people cackling maniacally as a happy hat full of water is dumped over their noggin. Isn't this what college is all about?

Despite its ridiculous premise, the #CondomChallenge supposedly has noble intentions, much like its far more boring cousin the #IceBucketChallenge.

According to Medical Daily, it's designed to promote safe sex: If condoms full of water can fit over someone's head and not break, the thinking goes, they should show dudes why "condoms don't fit" is a miserable excuse for unsafe sex.

Ron Frezieres, the vice president of research and evaluation for the California Family Health Council, told Mic that latex condoms are indeed designed to withstand a great deal of stretching — just as they appear to do in the #CondomChallenge.

"You can blow them up to about the size of a basketball," he said. "[It would get to] three full watermelons full before it would pop. They're designed to be extremely elastic."

"I don't know if you know guys with a penis the size of a watermelon!" he laughed, noting that the "condoms don't fit" excuse is usually just that — an excuse.

The #CondomChallenge mimics those creepy demonstrations from high school health class, wherein some poor sap is made to stretch a condom over his or her forearm to prove the damn thing won't break.

If you're going to partake, however, you may want to keep this important fact in mind: