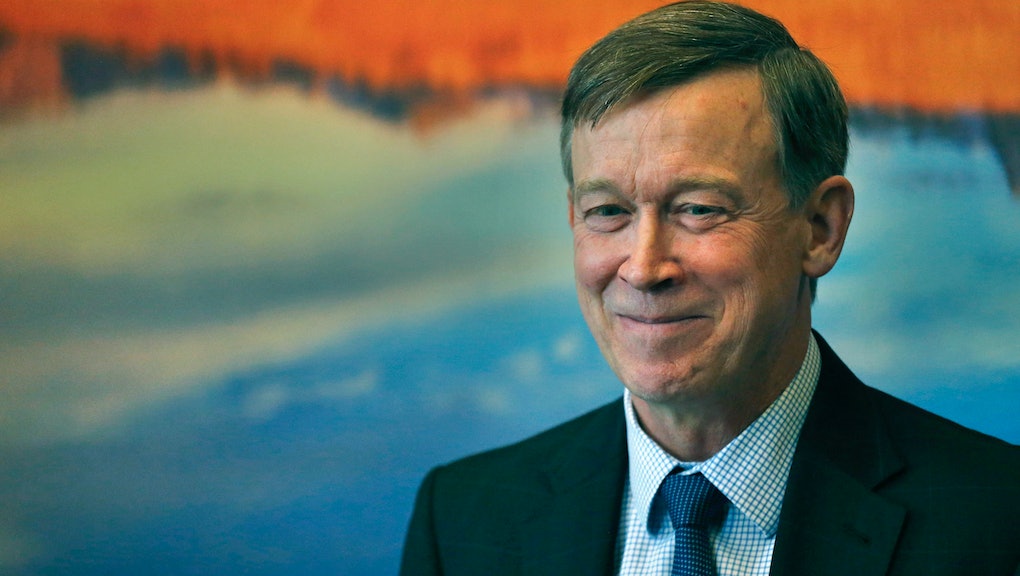 What Colorado's Governor Wants America to Know About Legalizing Weed

Just over one year ago, Colorado Gov. John Hickenlooper was openly opposed to marijuana legalization.

Speaking at an October 2014 debate in the closing days of his campaign for a second term as governor, Hickenlooper took aim squarely at legalized weed, saying, "If it was up to me, I wouldn't have done it, right? I opposed it from the very beginning. In matter of fact, all right, what the hell — I'll say it was reckless."

Although he went on to narrowly defeat his Republican rival, Hickenlooper's position on marijuana, at least publicly, remained firm after getting sworn in for his second term.

Quite a bit has changed in the past year.

During a wide-ranging conversation with Mic in his office at the State Capitol in Denver last month, Hickenlooper spoke about how marijuana has affected Colorado since it became one of the first two states to approve recreational marijuana legalization in November 2012. Seated around a long conference table, Hickenlooper, who has a warm personality and an endearing propensity to speak off script, confessed he's had a change of heart.

Hickenlooper's recent shift is a testament to the remarkable early success of legalized marijuana since weed dispensaries first opened in Colorado in January 2014. The state has not devolved into the lawless hellscape that some observers predicted. Quite the opposite, in fact: Hickenlooper said the rate of marijuana usage has remained flat, arrests have gone down and Colorado is on pace to generate about $100 million dollars in tax revenue this fiscal year.

But while some are quick to anoint Colorado's experiment a runway success, the reality is more complex, and Hickenlooper emphasized that the jury is still out on Colorado's experience. Despite encouraging initial signs, Hickenlooper, along with other Colorado policymakers who spoke with Mic, say the ultimate test lies ahead, as the marijuana industry gets bigger and more commercialized.

The backstory: Hickenlooper was first elected governor in 2010, but the key to understanding his change of heart on marijuana rests with his unique backstory. Before he ever entered politics, Hickenlooper began his career as a successful entrepreneur.

Hickenlooper, who once told the New Yorker that he used to brew beer in his dormitory bathtub and smoked pot regularly as a young adult, opened the Wynkoop Brewing Company in 1988 in the lower downtown district of Denver, an area also known as LoDo. In part due to Hickenlooper's pioneering spirit, LoDo is now thriving with renowned restaurants, live music venues, luxury condos and a host of tech startups.

At the turn of the century, Colorado leaned politically conservative, voting solidly Republican in three consecutive presidential elections from 1996 to 2004. Over the past decade, however, the state has undergone a dramatic political shift, fueled by a rapidly growing Latino population that made up 14% of the electorate in 2012, as well as an influx of millennials moving to the state en masse. President Barack Obama won the state twice, and Democrats held their 2008 national convention in Denver to highlight the state's evolving political dynamic. Hickenlooper, a moderate Democrat, also benefited from those demographic changes, first in his successful race for mayor of Denver in 2003 and then for his 2010 gubernatorial campaign.

Although Hickenlooper initially opposed recreational marijuana legalization when voters approved a constitutional amendment by a vote of 55% to 45% in 2012, it became clear while talking to him that his experience as an entrepreneur helps explain why he's coming around to the idea. Hickenlooper is passionate about innovation and views his state as a test tube for democracy, a place where new policy ideas get tested before scaling onto a national stage.

"When I was a kid, everybody went to California," Hickenlooper said. "California was always on the cutting edge of every liberal change, every liberal notion. Now it's Colorado and Denver. It really is an amazing thing. That's why we got marijuana legal."

Not a hellscape: Of course, another significant part of the story that has shaped Hickenlooper's perspective is the early success legalized marijuana has enjoyed.

"What we have seen is it hasn't been the catastrophe some people feared that it would be," Andrew Freedman, the director of the governor's Office of Marijuana Coordination, told Mic.

As the state's first "marijuana czar," Freedman is responsible for managing Colorado's marijuana tax revenue and helping to devise legislation to regulate the industry. He is also tasked with keeping close track of data related to legalized weed. Freedman cautions against drawing robust conclusions with such a small sample of less than two years of data, but he noted a number of positive early signs.

For one, usage numbers have not climbed dramatically. According to data provided by Freedman's office, approximately 10% of adults 26 and older reported smoking marijuana in 2013, prior to the beginning of recreational sales. That's compared to 13.6% of adults who reported being regular users in 2014. In 2013, 19.7% of high schoolers were regular users, a rate that was comparable to years before legalization.

"That shows we're at the same place in terms of adult use post-legalization as we were pre-legalization," Freedman told Mic. "We are seeing that as a continual good sign from the market."

The number of citations and arrests for marijuana have also declined since legalization. According to a study released by the Drug Policy Alliance in March, the number of marijuana-related charges declined 80% from 2010 to 2014. Hickenlooper suggested drug dealers seem to be leaving town.

"I think that was another worry, that there would be crime-ridden streets and everything would be incredibly dangerous," Freedman said. "We're not seeing any of that."

Instead, an entire new sector of the economy has developed as a result of legalized weed. Colorado has issued 20,000 occupational licenses in the marijuana business since legalization, according to Freedman. Hickenlooper is excited by the growing number of stories of young people, many fresh out of college, who have taken advantage of legalization to build their own businesses.

"We've got all these young people, and they're here, they're starting businesses, and they're driving our economy," Hickenlooper said.

One of those budding entrepreneurs is Braden Aletto, 26, who recently quit his corporate software industry job to work at a Denver marijuana dispensary. Aletto told Mic that he spent the past year learning the industry and studying business models, and has aspirations to become a CEO and potentially even open his own retail marijuana facility in the Rocky Mountains.

"This industry is so much more than just a bunch of stoners getting high," Aletto told Mic. "It's evolving into a big business."

Legalization is also generating a significant amount of tax revenue for Colorado. According to data Freedman's office provided to Mic, Colorado collected $149 million dollars between when recreational sales began in January 2014 and September of this year. Of that total revenue, approximately $112 million came from the recreational market. Freedman said current projections predict Colorado will collect about $100 million in marijuana revenue each fiscal year for the foreseeable future. Although that number pales in comparison to Colorado's total state budget, which Freedman says is about $26 billion, Hickenlooper is quick to emphasize how valuable that revenue is for the state.

He said he believes that this revenue can be used to mitigate the downsides of legalization by funding counseling programs and education initiatives that teach young people about the potential downsides of using drugs.

"If kids do fall off the track, we have money now for reengagement programs and drug counseling and all these things that were traditionally hard to raise money for in government," Hickenlooper said.

"My biggest fear was that kids would think since it's legalized, it's less harmful," he said. "We now have the money to [stamp] that out."

Traffic fatalities involving drivers under the influence of marijuana are also trending upward. According to Freedman's office, deaths involving drivers who tested positive for THC, the active ingredient in marijuana, increased from 55 in 2013 to 79 in 2014. Freedman told Mic that the total number of citations issued by the Colorado State Patrol for driving under the influence of drugs, however, has remained stable since January 2014.

"We're seeing a few things that concern us," Freedman told Mic. "Nothing that rises to what our public health people would say is an emergency, but stuff to keep an eye on. We're going to have to spend a lot more time digging [into the data] to know what's really going on."

Perhaps the greatest concern for Hickenlooper and his administration is whether the state government will be able to keep pace as the challenges of regulating such a rapidly growing industry evolve.

When voters passed legalization in 2012, Colorado had no existing system for taxing and regulating marijuana. Hickenlooper, along with other state officials, had to create one from scratch. That initial process has gone better than expected.

"I could not be more pleased and proud of the city employees and the industry working together," Denver Mayor Michael Hancock told Mic. "Everyone was all hands on deck to help provide the regulatory framework for proper enforcement and setup of these businesses in our city. Two years into this, I'm pleased with the direction we are going."

But as as the marijuana industry evolves, the state will face new challenges associated with regulating the industry. Hickenlooper said he recognizes the problem, drawing a direct comparison to the government's prior struggles regulating alcohol and tobacco as they, too, became big businesses.

"It is like Budweiser. It probably is going to be a battle like that because it's a capitalist system," the governor said. "So there's a profit to be made."

Hickenlooper and his administration are looking into expanding regulations to prevent the marijuana industry from targeting specific populations at higher risk of marijuana use, such as young people, by running advertisements for enticing products like edible baked goods and gummy bear candies.

"We have to work to stop people from trying to advertise directly to addicts, and directly to youth, in order to get them loyal to whatever brand is being promoted," Freedman told Mic. "Where alcohol and tobacco got there with time, it would be good to get that up and running as fast as possible with marijuana."

Lesson for the nation: As all eyes watch the Centennial State's grand experiment closely, what lessons should the presidential candidates, and other states, draw from Colorado's early experience?

According to Freedman, there are two things presidential candidates could champion in the short term to improve federal marijuana policy. First, he believes the United States should stop classifying marijuana as a Schedule 1 drug, the strict category reserved for drugs with no medical use. Both Sen. Bernie Sanders (I-Vt.) and former Secretary of State Hillary Clinton support rescheduling marijuana, with Sanders going further and advocating for repealing federal prohibition altogether.

"Having it be a Schedule 1 drug has meant that we don't have the facts that we need in order to properly regulate and use marijuana as medicine," Freedman told Mic. "That would be a great first step that we could do tomorrow that would do nothing but good things for the world."

"As we're watching all these experiments go forward in different states without access to banking, we have a safety problem," he said. "We also will not be able to create a legitimate industry. The presence of only cash is an invitation for corruption."

As for the bigger question of whether Colorado can be a model for the country, Hickenlooper said politicians should exercise caution. While it may not be the resounding answer that marijuana enthusiasts want to hear, he wants other states to wait to see how the effects of commercialization play out.

"What I tell other governors is we need a little more time," Hickenlooper said. "I'd wait a year or two and just see."