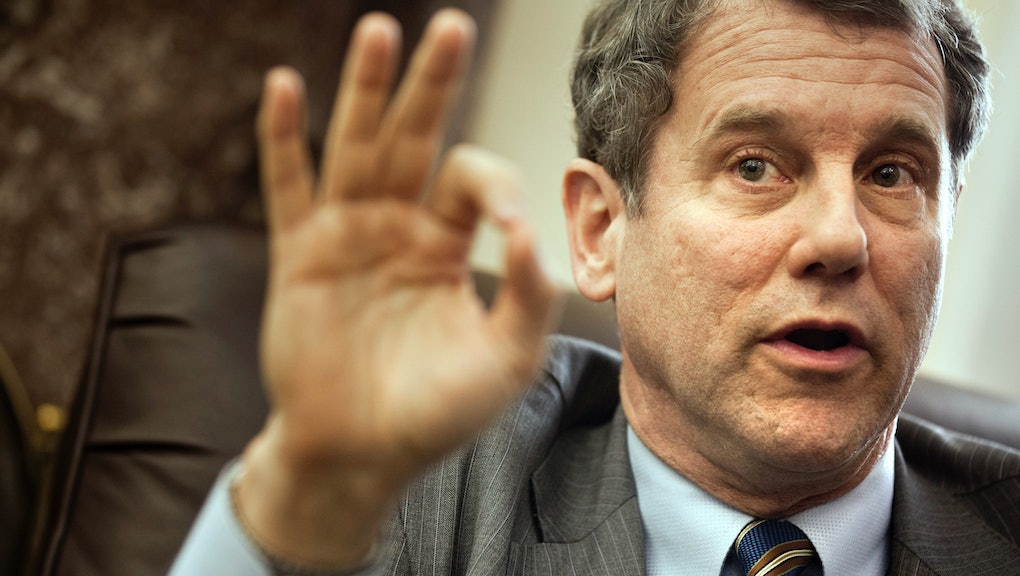 Truth can appear in surprising places, and few would deny that a politician's mouth is one of them. Yet in the past week alone, no fewer than two white men elected to public office in the United States have admitted a key statistical fact about terrorism since Sept. 11, 2001:

The biggest threat to America's safety is white men, and we need to stop telling ourselves otherwise.

Sen. Sherrod Brown (D-Ohio) went on Akron, Ohio-based radio station WAKR on Nov. 19 and had the following to say about the anti-refugee rhetoric being spouted by some of his peers:

"Since the beginning of the Bush administration when we were attacked, Sept. 11, we've not had any major terrorist attack in this country. We've had individual crazy people; normally, they look more like me than they look like Middle Easterners. They are generally white males, who have shot up people in movie theaters and schools. Those are terrorist attacks; they're just different kinds of terrorists."

The statement was echoed by Dallas, Texas, Mayor Mike Rawlings, who on Nov. 21 told MSNBC he was more afraid of "young white men" than Syrian refugees with possible ties to ISIS.

"I am more fearful of large gatherings of white men that come into schools, theaters and shoot people up," he said. "But we don't isolate young white men on this issue."

Both claims are supported by fact. Since 9/11, nearly twice as many people in the U.S. have been killed by white supremacist or other right-wing terrorists than Muslim jihadists — 48 versus 26, according to the New America Foundation, a policy think tank.

Yet Islamophobia continues to define much of America's internal national security policy and rhetoric. Muslims, or people who look like Muslims, are subject to undue harassment at America's airports, and have faced a large spike in hate crime violence over the past 14 years.

The New York Police Department ran a special unit for more than 10 years dedicated to surveilling and infiltrating Muslim communities in the Tri-State area in an attempt to sniff out future terrorist attacks. The unit was an abject failure by almost every conceivable metric.

"Not one single piece of actionable intelligence ever came out of that unit in its years of existence," New York City Police Commissioner William Bratton said Nov. 19.

"They are generally white males, who have shot up people in movie theaters and schools. Those are terrorist attacks; they're just different kinds of terrorists." — Sen. Sherrod Brown (D-Ohio)

Muslims are consistently asked to account and even apologize for terrorist attacks committed by other Muslims, even when they personally have no link to the violence.

As state-level politicians and Republican presidential candidates fight to outdo each other's callous disregard for Syrian refugees since the Nov. 13 terrorist attacks in Paris, these important details have been conveniently glossed over.

More than half of all U.S. governors have spoken out against letting refugees fleeing war in Syria and Iraq settle in their states. The U.S. House of Representatives also voted last week to impose near-impossible, stringent restrictions on refugees entering the country, despite an impending veto threat from President Barack Obama.

This, despite most of the Paris attackers being either French or Belgian, not refugees from Syria and Iraq. At least no one is suggesting all Muslims register in a database, like some fascist dystopia.