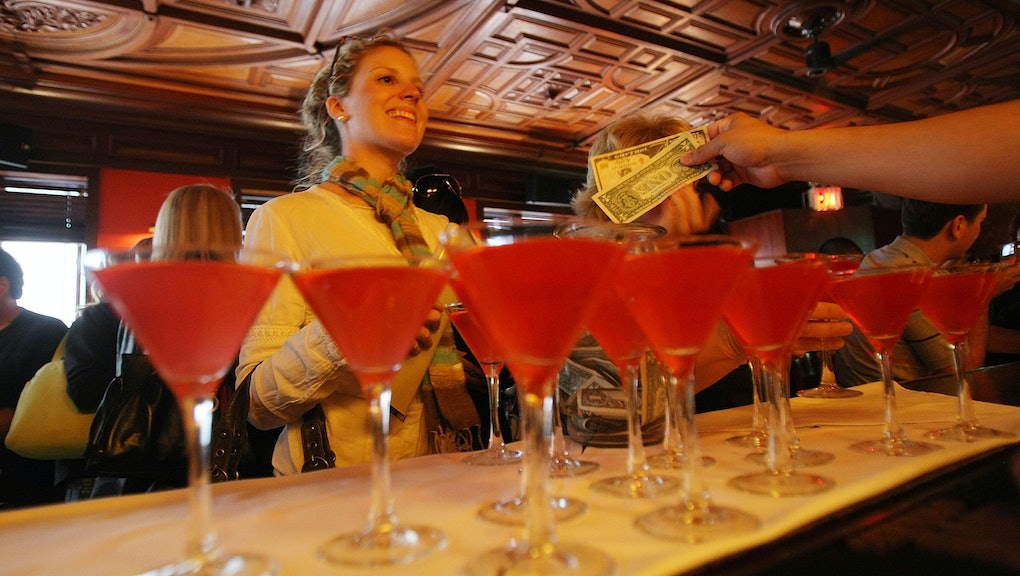 Of all the gaps that need to close in order to achieve gender equality — the wage gap, the orgasm gap, etc. — closing the booze consumption gap might not be the best sign of progress. But hey, maybe it means more people are having a good time!

Just in time for the holidays, a new study from the National Institute on Alcohol Abuse and Alcoholism (NIAAA) has indicated that American women are starting to consume more alcohol on average, while men are consuming less.

But there are still some notable differences between how men and women process alcohol — which means "drinking like a man" (downing a few more alcoholic beverages per month, becoming a whiskey woman) comes with distinct health risks for women.

The number of days per month men and women spend drinking has also changed significantly. While guys went from drinking an average of 9.9 days to 9.5 days per month, women are drinking much more often, from 6.8 days to 7.3 days per month.

Much of this trend can be attributed to the binge drinking epidemic among female college students, which makes sense: According to 2013 stats from the Centers for Disease Control and Prevention, 1 in 8 women reported binge drinking, or having four drinks or more in a row. This latest research indicates that among young women (18 to 25) who weren't in college, rates of binge drinking went up markedly, but went down for their male counterparts. College students between the ages of 18 and 25 didn't show much of a change in their binge drinking habits; they just kept chugging along.

"Differences in measures such as current drinking, number of drinking days per month, reaching criteria for an alcohol use disorder and driving under the influence of alcohol all narrowed for females and males," Aaron White, the lead author on the study, said in a statement. "Males still consume more alcohol, but the differences between men and women are diminishing."

Where differences persist: Men and women might be starting to meet in the middle, but that doesn't change the disparate effects of booze by sex. According to a statement from NIAAA director George F. Koob, the uptick in female drinking habits has disconcerting implications for women's health, "given that women are at greater risk than men of a variety of alcohol-related health effects, including liver inflammation, cardiovascular disease, neurotoxicity and cancer."

Men are at risk too, albeit for a different reason: They still drink more (and more often) than women and tend to get into more trouble when they're under the influence. As NBC News noted, the study found that men consume more than twice as much alcohol as women do annually, while a greater percentage of women than men (37% versus 25%, respectively) abstained from drinking entirely. Males also accounted for approximately two-thirds of deaths related to excessive drinking, and they were more likely to get DUIs or be involved in alcohol-related traffic accidents.

Oh, and while women might be drinking more, they're not doing it while they smoke weed. At least, not as much as men are.

But who knows? That's another gap we might soon close.