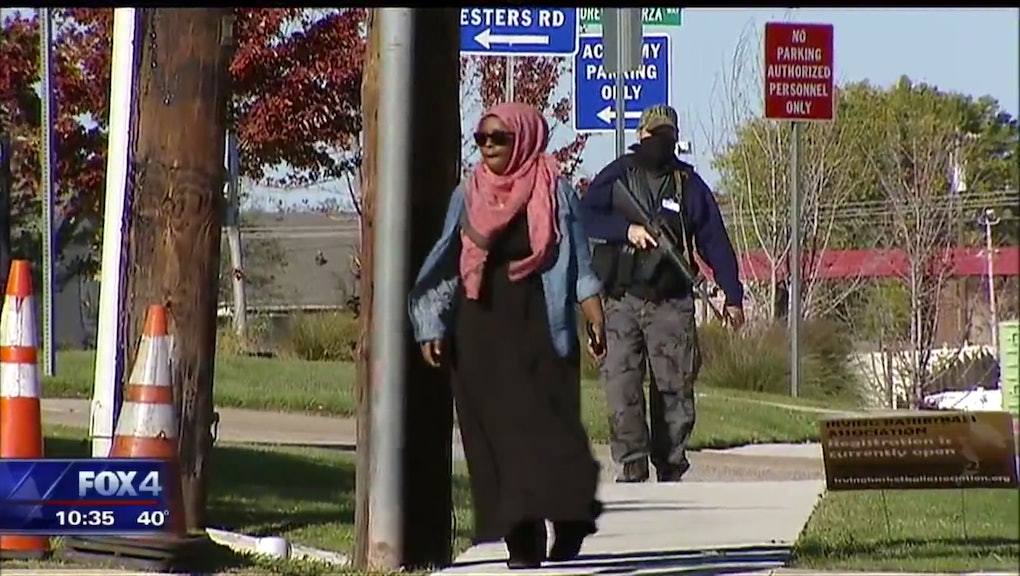 In Irving, Texas — the same town where 14-year-old Ahmed Mohamed was arrested and interrogated for bringing a homemade clock to school — a dozen heavily armed protesters clad in camouflage stood outside the Islamic Center of Irving on Saturday.

The group toted rifles, American flags and signs that said they were the "solution to Islamic terrorism" outside the center.

"It's a boiling pot. The top on this kettle is on really, really tight, and it is going to blow," one of the demonstrators told Fox 4 News. "I may look like their version of a racist, but I'm not. ... I just don't want them to push their beliefs down my throat."

Group spokesman David Wright seemingly admitted that intimidating the mosque's members was part of the point, telling the Dallas Morning News the firearms were "mostly for self-defense or protection. But I'm not going to lie. We do want to show force. We're not sitting ducks."

The Islamic Center of Irving is peaceful, and was quick to condemn the Nov. 13 Islamic State massacre in Paris that killed at least 130 people. The center issued a statement saying its members "denounce the attacks, as they have absolutely no basis in the religion of Islam" and cited Quran verses prohibiting murder.

Texas penal codes currently prohibit open carry of sidearms like handguns — until January 2016, when a sweeping gun-rights bill goes into effect — but are permissive when it comes to rifles and shotguns. Essentially, the protest was completely legal.

The most bizarre and stunning image of the day came during the Fox 4 broadcast. It shows a Muslim woman in a hijab and denim shirt walking down the sidewalk, followed closely by a man in fatigues with his face obscured and a rifle across his chest.

Local officials were not happy about the armed protest.

"My initial impression was they were using [the rifles] for intimidation," city councilman David Palmer told the Dallas Morning News. "I doubt that they'd be happy if some of the Muslim churchgoers here showed up at their Christian church, their Baptist church, their Methodist church tomorrow morning with rifles slung over their shoulders."