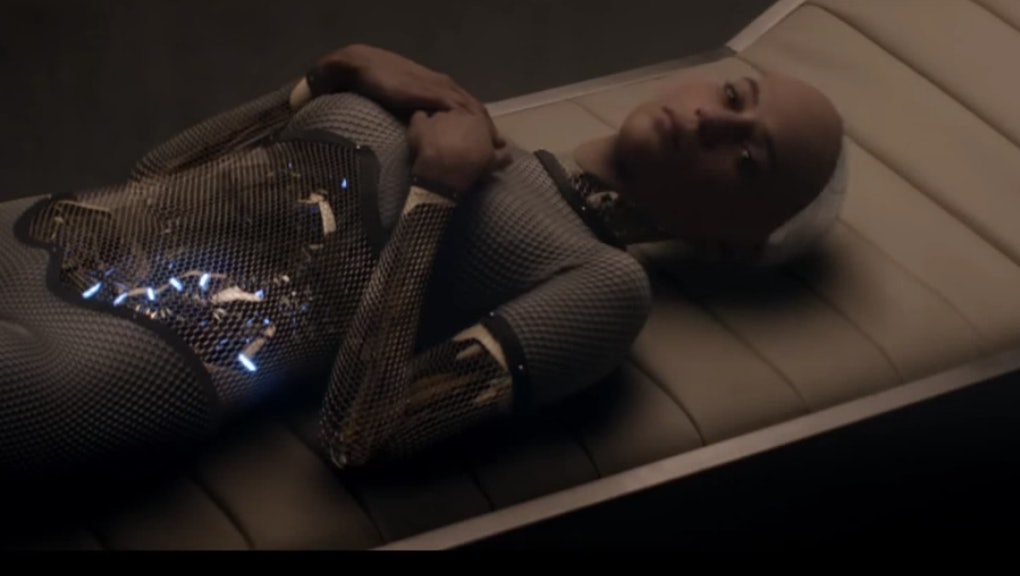 Will Sex Robots of the Future Actually Be Able to Improve Our Sex Lives?

If you've ever seen Her or Ex Machina, you're probably at least somewhat familiar with the concept of sex robots. Essentially, they're high-tech robots with the ability to partake in sexual activities like regular, able-bodied humans. But how close is this future of high-tech sex, really? And would the rise of sexbots be good or bad for the rest of us?

As it turns out, the consensus on this issue is evenly split. Earlier this year, for instance, ethicist Kathleen Richardson and informatics lecturer Erik Brilling took a firmly anti-sex robot stance by launching the Campaign Against Sex Robots, a movement to ban any future artificial intelligence used for sexual purposes. In their manifesto, Richardson and Brilling warned that the development of sexbots will be bad for humanity, on the grounds that they will "further sexually objectif[y] women and children."

On the flipside of the sexbot debate, Dr. David Levy, author of Love and Sex with Robots, imagines a future where sexbots will play a beneficial role in our community. In his book, Levy suggests that the rising popularity of sexbots might have primarily social implications, such as a "reduction in teenage pregnancy, abortions, sexually transmitted infections and pedophilia."

Sex educator Sonya JF Barnett has a fascination with the development and use of sexbots. Barnett recently gave a lecture at Playground, a conference for sex and sexuality, called The Future of Technosexuality. While some envision a future where sexbots become our primary companions, implicitly replacing humans, Barnett believes that sexbots aren't a threat to human companionship. Rather, she argues, sexbots could potentially help us become more sex-positive and help us improve our sex lives.

When we talk about sexbots, it's important to note, first and foremost, that much of this discussion is theoretical as the technology to make a fully functioning sex robot doesn't quite exist yet.

If you have the means to do so, however, you can buy realistic-looking sex dolls such as the Roxxxy TrueCompanion and RealDolls (NSFW), both of which were created with similar functions and aesthetics.  The developers behind RealDolls, which have been on the market since 1996, are currently working an animated version of the RealDoll which will incorporate artificial intelligence and robotics technology.

But rather than rely on current developers to create technologically advanced sex dolls, Barnett suggested that we could adapt pre-existing AI and robotics to address the needs of those who might have physical limitations or personal anxieties. People who have intimacy issues, she claims, will need patient, non-judgmental partners — whether in human or robot form.

Barnett dismisses any fears that such robots will replace all human interaction. Rather, she said, sexbots will serve as aids to help us overcome our personal hangups and make us more open and honest about sex.

"Fearing humanity's future with sex robots completely ignores how society currently teaches sexuality: as something dirty and to be feared," she told Mic. "Blaming robots instead of humans is way too convenient."

As an example of a form of AI that can be adapted for these needs, Barnett cited Milo, a 2-foot-tall, interactive robot with cameras for eyes. Studies have shown that Milo has been highly effective in teaching children with autism social interaction skills, as well as helping them identify emotions through one-on-one interactions.

Although Milo is intended as a classroom aid for autistic children, Barnett suggested that the principles behind Milo can be applied to create an adult humanoid robot to help people with intimacy issues or social anxiety. Such a robot could help adults explore their sexuality while eliminating the fear of rejection or anxiety that one might experience with a human partner.

Furthermore, Barnett sees a Milo-type robot being useful in teaching future generations of students for sex education. "A robot can show its own reproductive systems to students, replacing uncomfortable teachers and old, inadequate diagrams. It can also assist in teaching/learning about inappropriate touching, where a child can point to a spot on the robot with less embarrassment," Barnett told Mic.

Contrary to what Richardson and Brilling claim, Barnett said the increasing presence of sex robots won't drive society's perpetuation of the sexual objectification of women and children. Instead, Barnett told Mic that she believes the onus is on us to develop better sex education. "If things like compulsory and comprehensive sexual health education – which includes things like respect and consent – starts at a young age, then we shouldn't have to fear technosexuality," Barnett said.

The fear of sexbots may simply represent a natural, collective reaction to any new form of technology that is not widely used. This collective fear coupled with mainstream society's obsession and tendency to police sexuality, it makes perfect sense why there is such serious backlash and resistance to the acceptance of sexbots.

In Love and Sex with Robots, Levy writes that the vibrator's introduction was met with similar collective disapproval and fear, with states like Alabama going so far as to ban the sale of devices designed to stimulate "human, genital organs." Our attitudes towards sexuality change with time; Levy told Mic that "this will also be true regarding attitudes to sex with robots."

There is, however, one caveat to all this: Companies with the resources and financial means to pursue developments in sex technology are strongly against the use of robots for sexual means. For instance, Softbank, developer of the popular Pepper robot, have urged their customers against the sexual use of Pepper, and companies like Oculus Rift have also issued similar anti- virtual sex statements.

When it comes to creating or adapting current technologies to make the ideas outlined by Barnett a reality, there is clearly a very long way to go.  In order for society to see the positive benefits of sexbots, developers need to not only be less conservative towards sex and technology, but also see the potential in creating new sexbots that are designed for a variety of different bodies and needs. That said, once people realize that sexbots can be used as a sex aid rather than a replacement for a human sexual partner, it's likely that society's attitudes towards sexbots will shift toward increased acceptance.