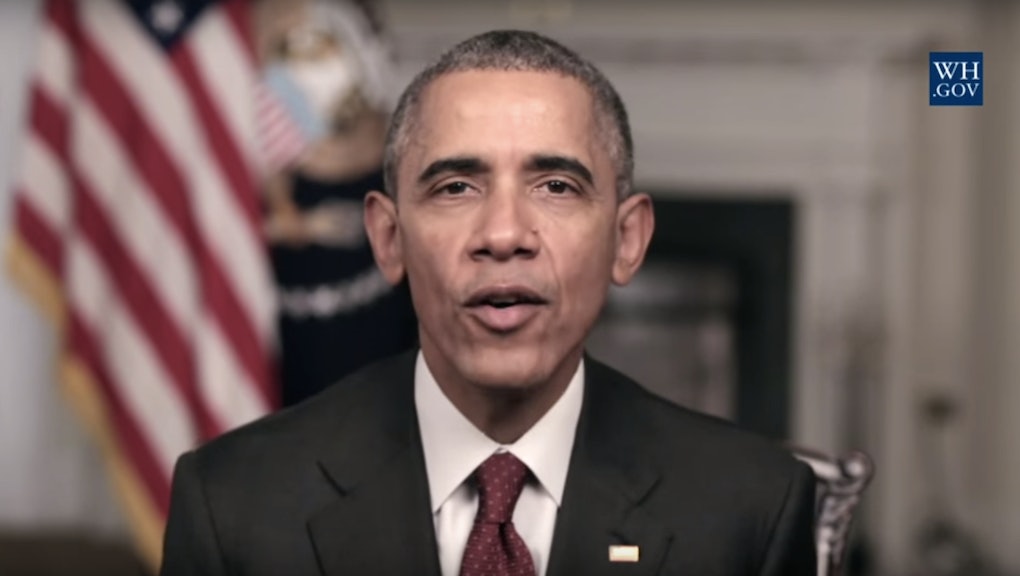 President Barack Obama used his weekly address this Thanksgiving to call on Americans — as well as a list of governors vowing to reject Syrian refugees from resettling in United States — to open their hearts and homes to those in need of the nation's generosity.

In his remarks, titled "This Thanksgiving, Recognizing the Greatness of American Generosity," he said, "Nearly four centuries after the Mayflower set sail, the world is still full of pilgrims – men and women who want nothing more than the chance for a safer, better future for themselves and their families. What makes America America is that we offer that chance. We turn Lady Liberty's light to the world and widen our circle of concern to say that all God's children are worthy of our compassion and care. That's part of what makes this the greatest country on Earth."

He continued, "Thanksgiving is a day for food and football and for hoping the turkey didn't turn out too dry. But it's also a day to count our blessings and give back to others — a reminder that, no matter our circumstances, all of us have something to be grateful for."

The message follows a bill passed in the House of Representatives on Nov. 19 that aims to limit the number of Syrian refugees entering the United States by requiring strict background checks and security clearances. Obama has already vowed to veto any sort of legislation deterring his administration's plan of increasing the number of refugees fleeing the Islamic State, otherwise known as ISIS or ISIL, in Syria to 10,000 throughout the 2016 fiscal year. The topic has become contentious within the federal government throughout the weeks following the Nov. 13 Paris terror attacks.

"I've been touched by the generosity of Americans who have written me letters and emails in recent weeks offering to open their homes to refugees fleeing the brutality of ISIL," Obama said in the address. "Now, people should remember that no refugee can enter our borders until they undergo the highest security checks of anyone traveling to the United States. That was the case before Paris, and that is the case now. And what happened in Paris hasn't stopped Americans from opening their arms anyway."

However, not all Americans agree with this sentiment. There have been growing concerns surrounding refugee resettling in the U.S. since the deadly terror attacks in Paris were found to have been organized, in part, by a terrorist who traveled freely to and from Syria while being watched by several government agencies.

Still, Obama reassured Americans in his weekly address refugees entering the U.S. have the strictest vetting process in place out of anyone entering the country. He encourages the nation to offer aid rather than fear, saying, "all God's children are worthy of our compassion and our care."