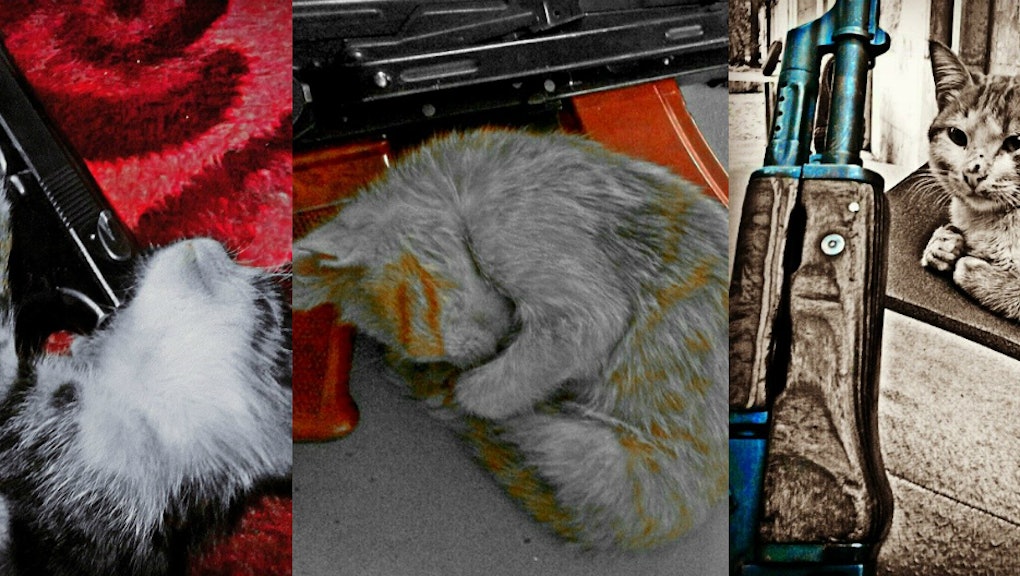 Take a Tour Through the ISIS Tumblr With This Armed, Cat-Loving Jihadi

The Tumblr blog for Israfil "Chechclear" Yilmaz, the Dutch soldier fighting for the Islamic State group, also known as ISIS and Daesh, is a haunting and personal account of war and radicalization — one among many in ISIS' spreading flood of social media memoirs.

The Tumblr page is a diary for Yilmaz's journey from the time he left the Royal Netherlands Army in 2013 to fight the Assad regime in Syria, to present day as a fighter for ISIS.

There are pictures of children in groups, flowers sticking out of the pockets of military jackets and pictures of kittens curled up around rifles and grenades — #CatsOfJihad, seriously. There are inspirational quotes and memes that would look like they could be taken from a Tumblr grunge blog, if not for the terroristic bent: "In jihad you either adapt or perish. #struggle #jihad #mujahideen."

But Yilmaz didn't just post up pics and microblog — he took questions using Tumblr's Q&A tool, which allows anyone to send a question to his inbox.

What do you think of Hamas? "Weak sauce."

Do you miss your mother? "At times, yes."

Yilmaz's long-standing Tumblr account was taken down after the New York Times profiled it last week, but a version of it is still available at the Internet Archive, last recorded on Oct. 19.

ISIS is all over social media, and it's nearly impossible to wipe them away. Jihadists use Twitter especially as a vital tool for propaganda and recruitment, making hundreds of thousands of accounts to reach across the globe into the Western world to find sympathetic young people to recruit. Though social media sites are close-lipped about how they fight back against ISIS accounts, they have been active in banning them — Yilmaz had accounts taken down from Instagram and Twitter before he lost his Tumblr.

"Tumblr is a global platform for creativity and self-expression, but we have drawn lines around a few narrowly defined but deeply important categories of content and behavior, as outlined in our Community Guidelines," a Tumblr representative told BuzzFeed, though Tumblr doesn't have specific guidelines banning terrorists.

"Nothing beats reality on the ground."

But the game of exorcising ISIS from social media is less like whack-a-mole and more like cutting heads off a hydra — social platforms are totally overwhelmed, and jihadists simply end up making new accounts with new hashtags. Somewhere out there, Yilmaz likely has a new Tumblr account with a new alias. And even as these profiles are removed, they leave a trail of crumbs into the grotesque and electric world of ISIS that gives us a more intimate, human and ultimately horrifying portrait that you rarely see in the news.

In Yilmaz's own words, "Nothing beats reality on the ground."