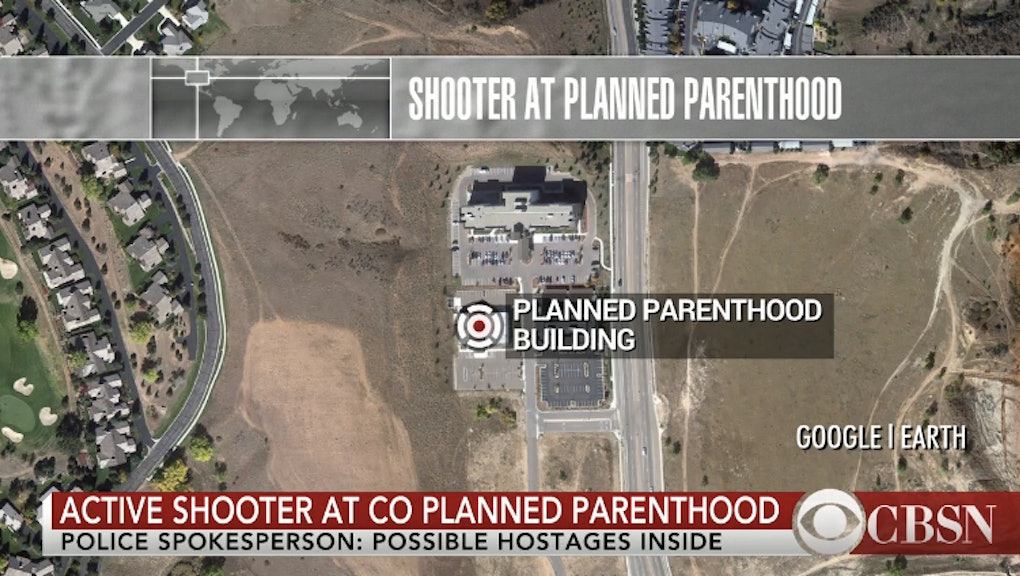 On Friday, Robert L. Dear made his way into a Planned Parenthood in Colorado Springs, Colorado, shooting at civilians and police officers alike, prompting a rush of law enforcement to the area and putting the entire vicinity on lockdown.

Colorado Springs police Lt. Catherine Buckley said Friday at a press conference, "We're not sure of what the connection is to Planned Parenthood."

While the shooter's motives have yet to come to be released, what we do know is that this is not the first violent attack waged at a Planned Parenthood facility, and it likely won't be the last. Mass shootings at Planned Parenthood and other reproductive health clinics might not be common, but violence and harassment are.

In August, police investigated a car fire at a Planned Parenthood construction site in New Orleans. That same month, a man was accused of vandalizing an abortion clinic in Metairie, Louisiana. In September, an arsonist set fire to a Planned Parenthood in Pullman, Washington, that forced the clinic to shut down for at least a month. On Sept. 30, another arsonist targeted a Planned Parenthood in Thousand Oaks, California, smashed a window, poured gasoline inside and then set it on fire.

Attacks and intimidation of women's health facilities and the patients who rely on them aren't new. From 1977 to 2014, there have been nearly 7,000 violent attacks against abortion providers, including bombings, burglaries and murders, according to the National Abortion Federation. It's been six years since George Tiller, one of the few doctors in the United States to provide late-term abortions, was murdered while attending Sunday church.

But the past several months have seen a rise in attacks of every kind, including a notable increase in arson, with four alleged incidents in four months. Planned Parenthood has even been subject to cyber attacks: In July, hackers published the names and email addresses of 333 people associated with Planned Parenthood.

David S. Cohen, Drexel University professor and co-author of the book Living in the Crosshairs: The Untold Stories of Anti-Abortion Terrorism, told Mic at the time, "Publishing a list like this is just another way for someone out there who wants to do harm — and we know those people exist — to get more information that facilitates their harm."

But what also facilitates that harm is the fanning of flames with extremist language and viewpoints, the kind we've seen recently out of Congress and presidential debates, as conservative lawmakers and politicians use incendiary language and level questionable allegations against Planned Parenthood.

As Sen. Dianne Feinstein (D-Calif.) noted after the arson in Thousand Oaks, "The toxic rhetoric directed at Planned Parenthood has dangerous consequences. It sends a signal that using violence to close clinics and intimidate health care professionals and women is 'OK.' It is not."

Politicians might have a harder time justifying that rhetoric if the violence it ignited was called out for what it is: total, unabashed terror.

We may hesitate to use the word, but the attacks and intimidation — the stalking, the blockading and now the mass shooting — are meant to inflict terror and deny women their rights, not only to abortions but to the myriad other health services offered by clinics like Planned Parenthood, including testing for sexually transmitted infections and cancer screenings.

"In modern Western parlance, that term is used overwhelmingly to describe acts of violence committed by Muslims," Mic's Zak Cheney-Rice previously noted. But when we fail to note other acts of terror when they're committed and call them what they are, we're even less likely to call out the extremism that's prompting them.

As Planned Parenthood noted one day before the shooting in Colorado on Twitter, "We're especially thankful to partners & allies who have refused to let anti-abortion extremism and attacks take us back decades."

So far, Dear's actions have resulted in the deaths of one police officer and two civilians. While we're still waiting for specific clarification of his particular motives, it remains clear that extremism is still alive and well here in the U.S. — and calling it what it is is more urgent than ever.