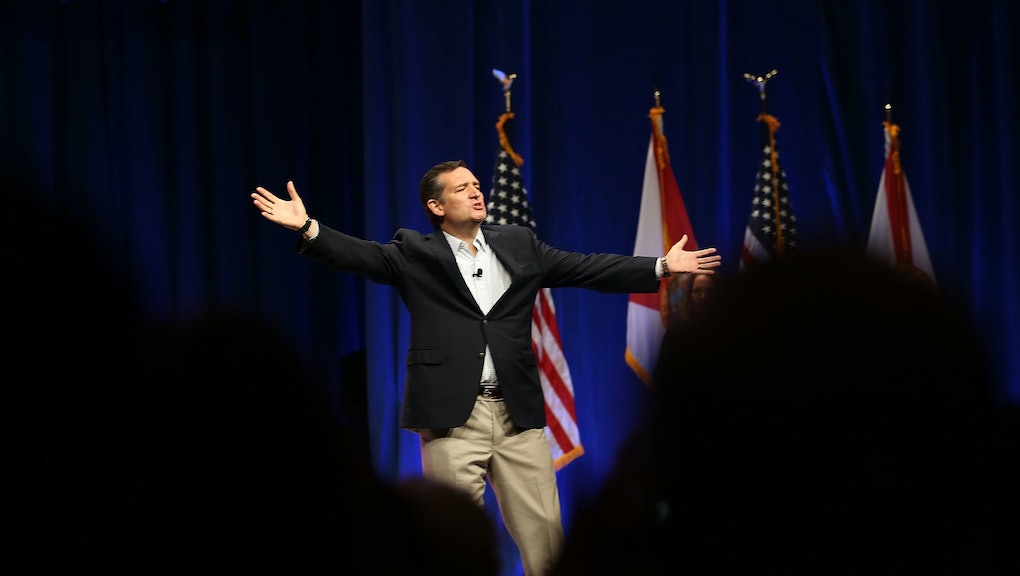 Those were the four words suspected shooter Robert Dear reportedly uttered after allegedly going on a vicious shooting spree at a Planned Parenthood clinic in Colorado Springs, Colorado, over the weekend. If they seem familiar, they should: Permutations of those words have been coming out of the mouths of Republican candidates for president for months.

When compared with Republicans' rhetoric, the language the Colorado shooter allegedly used isn't that extreme. In fact, it mirrors the rhetoric mainstream Republican candidates have openly used during the campaign. An alleged mass murderer and the people running for office are using the same language to talk about Planned Parenthood. Let that sink in.

It's not just what they say — it's also what they don't say. Interestingly, with the exception of Huckabee, the Republican candidates have avoided labeling what happened in Colorado as terrorism — an omission made all the more glaring in the context of the current political debate over who can better defend the United States against the threat of terror.

The mayor of Colorado Springs, John Suthers, has described the attack as "domestic terrorism." According to ABC News, the "Justice Department is building a domestic terrorism case." Yet Fiorina called the suspected killer a "protester," and compared him to Black Lives Matter activists. Cruz went the extra mile by describing the shooter as a "transgender leftist activist."

Some Republicans are likely reluctant to call the Colorado shooter a terrorist because doing so would imply that the ideology they have made a focal plank of their campaigns could be inciting violence.

Would Cruz or Fiorina dare refer to the Paris bombers as activists or protestors? Of course not. As Mic's Zak Cheney-Rice has pointed out, that kind of treatment is only reserved for some — most often white people.

Words matter. The language candidates choose to talk about issues like Planned Parenthood has wide-ranging implications. When politicians call abortion murder, it emboldens anti-abortion activists to intimidate, harass and sometimes harm those who provide the service. Since the release of videos that claimed Planned Parenthood profits off trafficking fetal tissue, there have been a spate of arsons targeting clinics.

Words also have weight. While candidates continue to espouse support for personhood amendments that would regard a fetus as a human life, there's little talk about what those laws would mean for women. Personhood could make an abortion or even some forms of birth control illegal. What happens to the women? As Mic reported in the first episode of the second season of Flip the Script, no one on the right has really thought that one through:

While Republicans struggle to distance themselves from the alleged shooter in Colorado, they're only making their connection to his reported positions clearer. Even if they try and turn themselves into victims or decry "left-wing tactics," their nervous defensiveness is palpable. The GOP can attempt to demonize the suspected killer all they want, but regardless of how deranged he so clearly was, he still used rhetoric that mirrors what the Republican Party has been repeating ad nauseum. The GOP might not like the messenger, but it's their message he's carrying.