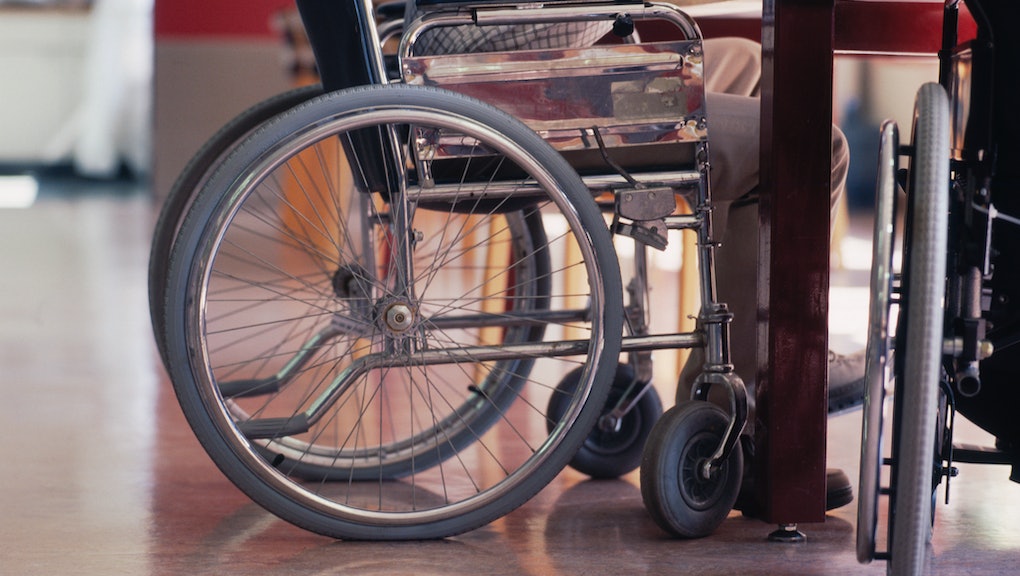 The Best Way to Start Talking to Someone With Disabilities? Just Say Hi

Tom Ellenson is a classic theater kid. He decorates his bedroom with autographed copies of Playbill. He's in the midst of writing a script of his own. He's seen dozens of Broadway plays and dreams of performing on the Great White Way himself one day. He'd love to tell you about the time he chatted up Daniel Radcliffe after a performance of The Cripple of Inishmaan.

Tom uses a speech device to communicate. He gets around in a motorized wheelchair. Like more than 17 million people around the world, Tom has cerebral palsy, a permanent disorder affecting the body's movement and posture. As soon as some people notice his disability, they choose not to start a conversation at all, the 18-year-old told Mic in an interview at his home November 20.

Tom's dad, Cerebral Palsy Foundation CEO Richard Ellenson, chimed in from the kitchen chair beside his son. "Too many people are afraid to say anything to anyone who they perceive is different, because they don't want to offend them," Richard said.

And then there are the people who completely overstep their boundaries. "Strangers touch my head and pray for me," Tom said, communicating via his iPad. He used his hands to type words and sentences, and the iPad read them aloud. "It's really, really annoying."

Those types of people, Ellenson said, don't learn the truth about his son: "Tom's just another kid who loves theater."

To help break down those barriers, the Cerebral Palsy Foundation recently launched Just Say Hi, a campaign encouraging the public to do just that when they encounter someone with a disability.

"The idea was that unfortunately, many people are not comfortable when they're first confronted by disability," Ellenson said.

But it shouldn't be awkward. "There's no secret" to making the introduction, Ellenson said. "How would you approach someone you've never met before? Just say hi."

Since launching a little over a month ago, Just Say Hi has garnered support from celebrities including John Oliver, Felicity Huffman, Michael J. Fox, Oliver Platt, William H. Macy and Mario Batali, all of whom have produced videos addressing the needless awkwardness that, sadly, often accompanies meeting people with disabilities. The videos are viewable on the Cerebral Palsy Foundation's website, as well as on the Just Say Hi app.

"My friends at the Cerebral Palsy Foundation asked if I had any advice on how to start a conversation with someone who has disabilities," Oliver says in his video. "Maybe let's start with what not to do. Don't mumble, or stare, or blurt out an intimate detail from your own life. And, whatever you do, don't speak extra loud as if being in a wheelchair is somehow the same as wearing noise canceling headphones."

"Frankly, those aren't particularly good ways to start a conversation with anyone," Oliver continues, before suggesting people just say hi — and go from there.

"The Cerebral Palsy Foundation asked me how you start a conversation with someone with disabilities," Fox says in his video. "I usually just start with 'Hi!' Unless you're Canadian, and then I say, 'Hi, eh.'"

One particularly charming video features Jason Benetti, a sports broadcaster who happens to have cerebral palsy.

"The Cerebral Palsy Foundation knows that I have CP, so they asked me if there are ways particularly that I like that people start conversations with me," he says. "There are a couple. One is, 'Hey, I've seen some of the games that you do — you do a great job.' Another is, 'Wow, you're hot in person!'"

Of course, once you say hi, it only makes sense to say other things too.

"One thing you do get a lot, also, is people who just say hi and don't do anything else," Ellenson said. "You have to join a conversation. That's a really critical thing that people have to understand. 'Hi' begins a conversation — it's not the [whole] conversation."

The Cerebral Palsy Foundation plans to release around 25 celebrity videos, with even more Just Say Hi initiatives to come.

Ellenson reflected on why the campaign was "spinning so quickly" since launching only a few weeks previously.

"I think someone has articulated something that has always been there, but has never been acknowledged," he said. "It's amazing."