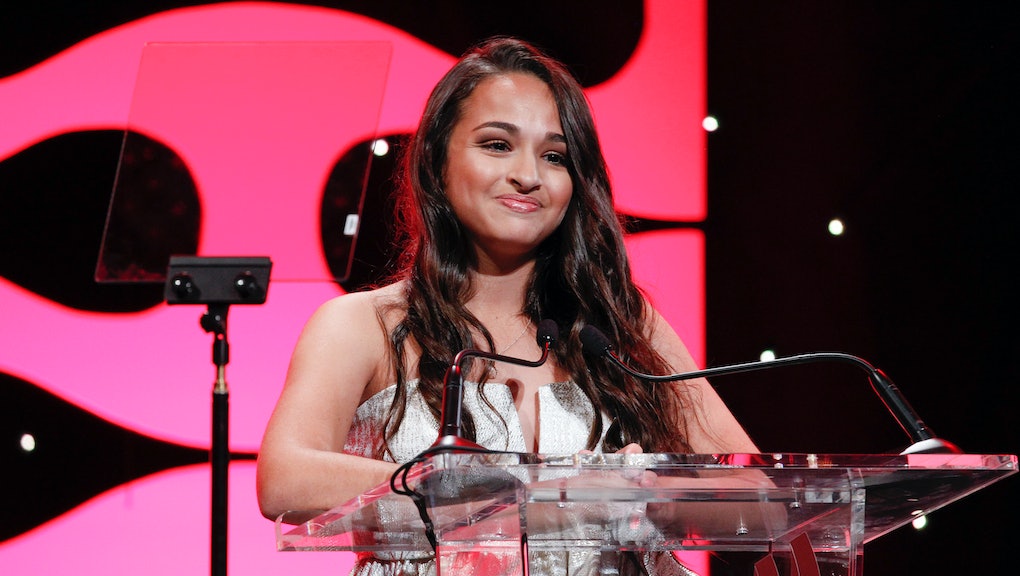 This Community Had an Inspiring Response to Threats About Transgender Education

Teen activist Jazz Jennings has done much to help the world understand the experience of transgender youth. She has starred in a documentary, upcoming TV show, and even written a book entitled I Am Jazz. But when one Wisconsin elementary school decided to introduce her book into their curriculum in order to help their community support and understand a transgender student, they not only faced disapproval, but litigious action.

The Liberty Counsel litigation group — a known hate group — sent a letter to the school on behalf of a group of parents who felt the reading was a violation of their "parental rights," the Washington Post reported Sunday. The school cancelled the reading in response to the group's various claims that I Am Jazz depicts a "psychological and moral disorder," and would lead children to "falsely believe that one can choose one's gender," according to the same report.

Of course, these claims fundamentally misunderstand the experience of being transgender. Not only has the American Psychiatric Association confirmed that gender nonconformity is not inherently linked to mental disorders, but one 2015 study also showed that transgender children identify with their gender identity as consistently as cisgender children, and that gender identity can't be chosen. These are facts the elementary school even acknowledged in a pre-emptive letter they sent to parents about the reading.

"All students deserve respect and support regardless of their gender identity and expression, and the best way to foster that respect and support is through educating students about the issue of being transgender," Cosmopolitan reported the letter stated, adding that parents could withhold their children from the reading if they so chose.

Even so, the parents who enlisted the Liberty Counsel felt the issue extended beyond the reading itself and that the broader effort to support a transgender peer infringed on their children's rights. Expecting their children to refer to their peer with female pronouns, the litigation group's letter stated, "infringes upon the other students' rights to tell the truth, in accordance with their religious convictions, and reality," Buzzfeed reported.

This group of parents' views may ultimately be the minority in their community, however. On Wednesday, one parent in the school community, Amy Lyle, will hold her own reading of I Am Jazz at a local library and the high school's Gay Straight Alliance chapter will hold another, according to Buzzfeed.

This show of support is crucial. Studies show transgender youth face outsized obstacles in childhood. Transgender youth experience higher rates of mental health issues like depression, anxiety, suicide attempts and self-harm, according to a study by the Journal of Adolescent Health, but also experience mental health improvements when they are allowed to express their gender identity as they see fit, according to another study. A Williams Institute study found the leading cause of homelessness among the estimated 40% of LGBT-identified homeless youth is family rejection. Facts like those make it crucial for communities to publicly to learn how to better support trans youth in America.

As the mother of the transgender child at the center of this controversy told the Wisconsin State Journal, the goal of publicly reading the book is ultimately a simple one.

"My daughter just wants to be accepted, included, and not bullied," she said. "If we can teach them to respect people's differences at a young age, it's important."