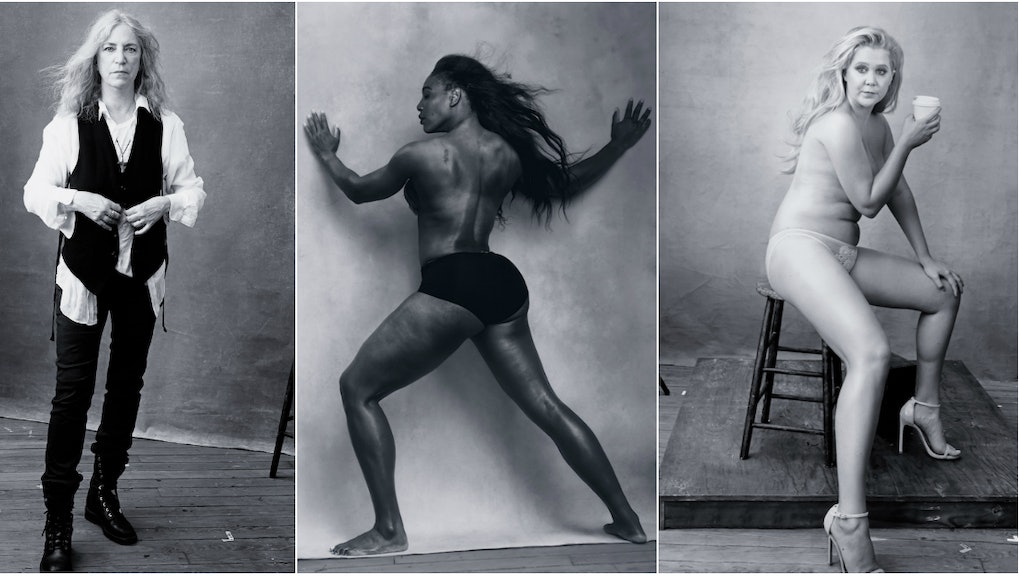 Pirelli Calendar 2016 Shows Women at Their Strongest, Most Badass Selves

If you want to look for signs of feminist change, you might as well check the Pirelli Calendar.

The Cal, as it's known, is the fashion industry's yearly celebration of unabashed beauty — and usually, unabashed nudity, featuring the top models in the world in every stage of undress. But the 2016 Pirelli Calendar, unveiled on Monday by the Italian tire company that puts it out, features few fashion models and even less nudity.

In fact, the calendar is all about strong women, wearing whatever they feel best in.

Serena Williams was the first sign that this year's Cal was different. The tennis star revealed back in September that she'd be appearing in the calendar, a noteworthy announcement considering she's not a model, but also doesn't fit the typical "model body" mold and happens to be a woman of color — another rarity in the Pirelli Calendar.

And nearly all of them are fully clothed.

This is the first time, notes Vanessa Friedman of the New York Times, that "the attraction of the subjects is in their résumés, not their measurements." Instead, notes Pirelli in a press release, "The women are of different ages and backgrounds and have different kinds of careers."

Annie Leibovitz, the photographer behind this year's Cal, said in the release, "[Pirelli] suggested the idea of photographing distinguished women. After we agreed on that, the goal was to be very straightforward. I wanted the pictures to show the women exactly as they are, with no pretense."

That includes Schumer posing in lingerie, the only nude in the calendar "as if she didn't get the memo saying that she could keep her clothes on," said Leibovitz.

Pirelli doesn't explicitly state any feminist intentions in its calendar reveal, but the change in times is clear. Sure, models still pose nude on the reg; but the desire for those photos has waned as more people — namely women — speak up about the objectification of women in the media and the lack of respect paid to women's professional accomplishments (just ask the actresses tweeting #AskHerMore on the red carpet).

That hasn't typically been the focus of the Pirelli Calendar, which, for 51 years, has showcased fashion models mostly or totally naked — think Gisele, Kate Moss, Heidi Klum, Joan Smalls, Isabeli Fontana and basically every other model who ever graced a magazine spread.

Now it's about women's accomplishments, not their beauty, first and foremost, in a move that seems to fit the times. As Tavi told the New York Times, "A white, able-bodied cis-gendered woman being naked is just not revolutionary anymore. ... I don't think anyone is going to be like, 'Damn, I wanted those naked chicks.'"

There may still be viewers looking for the nude model shots this year, but we have a feeling there are plenty of others — including many women — who are more than happy to hang pictures of Patti, Serena and Amy on their walls.