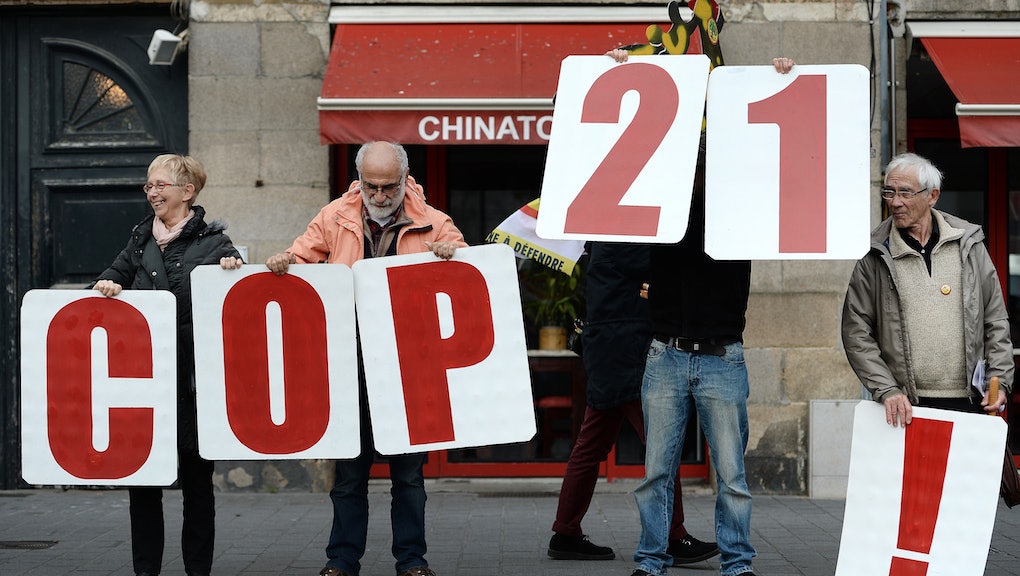 Here's What's at Stake at the Historic Climate Conference in Paris

On Monday, the 21st session of the United Nation's annual Climate Change Conference began in Paris. The stakes for the talks, known as the Conference of the Parties or COP21, are higher than ever.

For some climate activists, the non-binding framework underlying the current negotiations is fatally flawed, guaranteeing that any results achieved in the next two weeks are more about good optics for world leaders than they are about real progress on tackling global warming. Indeed, even if every country in the climate talks chooses to uphold its current pledge, it will not be nearly enough to meet the international target of limiting warming to 2 degrees Celsius over the next 100 years.

But that's not exactly the point of Paris. These talks aren't meant to hatch a collective solution to the existential crisis posed by global warming, something that has been tried and failed repeatedly. At this point in the beleaguered agenda to find a solution to global warming, ultimately the biggest decisions will be made in national capitals at the behest of a rapidly growing climate movement. Instead, the talks in Paris serve as a kind of architecture of ambition, and set the foundation for even greater efforts in the future.

The background: The first UN Climate Change Conference took place in Berlin in 1995, and talks have occurred every year since. But the most critical context for this year's talks is the 2009 conference in Copenhagen, Denmark.

The 2009 talks were meant to secure an international treaty for hitting the 2-degrees-Celsius target by way of a two-tier system. Under that framework, developed countries would have been legally bound to hit emissions targets, while developing countries would have only pledged to voluntarily hit commitments. The conference itself was disrupted by climate activists who protested developing countries bearing the brunt of climate change, and the city of Copenhagen was overrun with thousands of rambunctious protesters. No agreement was made, and the conference was widely considered a miserable failure.

In the wake of Copenhagen, subsequent talks drifted away from corralling every country in the world to sign one huge binding agreement, and toward the idea of nationally determined voluntary goals. The hope is that without the seemingly insurmountable task of getting the entire global community to pledge to meet targets, ultimately individual countries will be free to act more effectively on their own.

What can happen at Paris: The range of topics that will be covered in Paris is large, but there are a few major issues at stake. One of them is forming an international consensus on how quickly the fossil fuel industry should be considered obsolete.

"Paris is going to be a referendum on the future of the fossil fuel industry and how quickly we move toward 100% renewable energy," Jamie Henn, co-founder of 350.org, a left-leaning climate policy organization, told Mic. Henn said that a goal of having an economy run entirely on renewable energy by 2050 would be a sign of real ambition, and send a clear signal to global investors.

Another major issue is what kinds of pledge review and renewal processes will be implemented. While today's pledges are all unambiguously insufficient in meeting the 2-degrees-Celsius target, designing programs to aggressively revisit pledges could possibly change that.

"The precise details matter quite a bit. U.S. negotiators have pushed for a five-year review cycle; India has proposed a looser 10-year review cycle," Vox reports. "There's also the question of whether countries would be pressured to strengthen their pledges during each subsequent review, to take into account, say, advances in renewable energy technology or faster-than-expected progress. ... Meanwhile, those pledges are worthless if they can't be verified in a transparent and consistent way."

There are also big questions swirling around a $100 billion fund designed to help poorer countries prepare for the effects of climate change, which they are more likely to be affected by and least likely to be equipped to handle.

"This is likely to be one of the hardest-fought parts of the Paris Agreement because developing countries are demanding a specific, and higher, figure after 2020, and there is dissent about how much aid should come from countries like China, which recently pledged $3.1 billion," reports the Guardian.

The takeaway: Any agreement that comes out of Paris won't create a binding contract, but that could ultimately keep climate activists more clear-eyed.

"The [1997] Kyoto treaty was a legally binding treaty, the U.S. never ratified it, and then Canada didn't actually make good on its commitments and violated them and nothing happened, so legally binding at the international level can be a bit of an illusion anyway," Henn said. "The only way to really make sure that countries follow through is to have the kind of political pressure that social movements and others can provide."

It might be more difficult to create that kind of pressure at the conference this year, as Paris has banned public protests in the wake of the ISIS terrorist attacks earlier in November. But Henn reported that there was at least one subdued demonstration in Paris, and so far more than half a million people protested in cities across the world on Sunday.

So far, the world's most powerful countries have demonstrated a lack of willpower and competence regarding climate change, and Paris holds no promise of changing that record. But popular pressure during and between climate talks does.