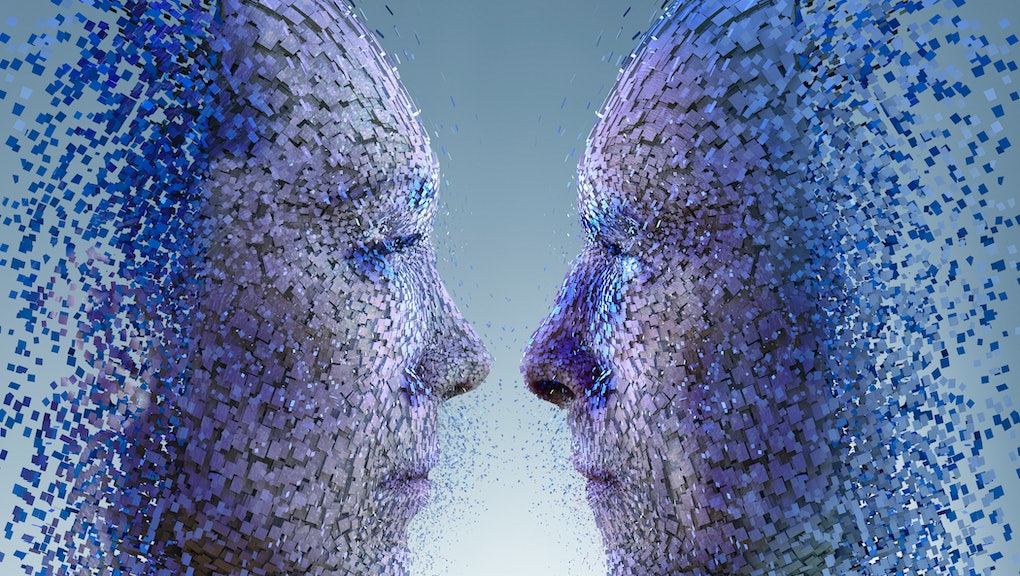 In 25 Years, First Dates Might Be Totally Obsolete. Here's Why.

If you're the kind of person who doesn't have the energy to get off your ass and go out in public to meet up with your Tinder matches, then we have exciting news: In a few years, you might not have to put on pants to go out on a date anymore. In fact, the first dates of the future just might be taking place from the comfort of our couches, thanks to the advent of virtual reality technology.

According to a report by Imperial College London and the dating website eHarmony, in 25 years "full-sensory virtual reality dating" might very well be a thing, which means people can just sit back and meet a potential bae online without having to walk out the door.

"A full sensory virtual date would be exactly like a real one — you could hold someone's hand [or] even smell their fragrance — but all from the comfort of their own home," they wrote. "This would mean you could fully 'meet' someone online, before you actually meet him or her in the real world."

The research was done by students of Imperial College London's business school. It was commissioned by eHarmony in an effort to analyze the evolution of lifestyle habits over the past 100 years and predict where it's all headed in the future. The researchers arrived at their prediction by looking at data transfer speeds from over the past 100 years and seeing how fast they're likely to climb in the next 25 years.

"By 2040 the rate at which data can be transferred will be 952,000,000,000 bits per second," they predict. "Which is considerably higher than the rate scientists believe is necessary to create virtual reality that simulates all the senses."

This isn't the first report to predict that technology is about to revolutionize (and/or destroy) how we connect with possible romantic partners. Earlier this month, researchers announced the invention of a virtual reality suit that they claimed was capable of transmitting virtual reality hugs. Called the Teslasuit, the garment aims to be of particular use to long-distance couples.

"You could load any environment, from a beach, to any romantic place — wherever your [imagination] would take you," co-founder Dimitree Marozau previously told Mic. "You could walk together. You could feel and touch each other. You could feel the effect of wind. It's a fully immersive experience."

Meanwhile, sex toys have been headed straight in the VR direction as well. From creepily realistic sex robots to the emerging field of teledildonics, which allows couples to remotely "connect" their respective sex toys from afar via mobile technology, it seems that being in the same room as a lover is on its way to being straight-up optional.

Whether or not that's a good thing is up for debate. Some folks worry that virtual reality may wind up leading to eye (or even brain) damage, and others have expressed concern that it is simply bad for good old fashioned human relationships.

But however you feel about the implications of this new technology, it seems researchers are convinced of its potential to revolutionize the way we connect with each other.

Get ready for some digital, digital get-downs, y'all.