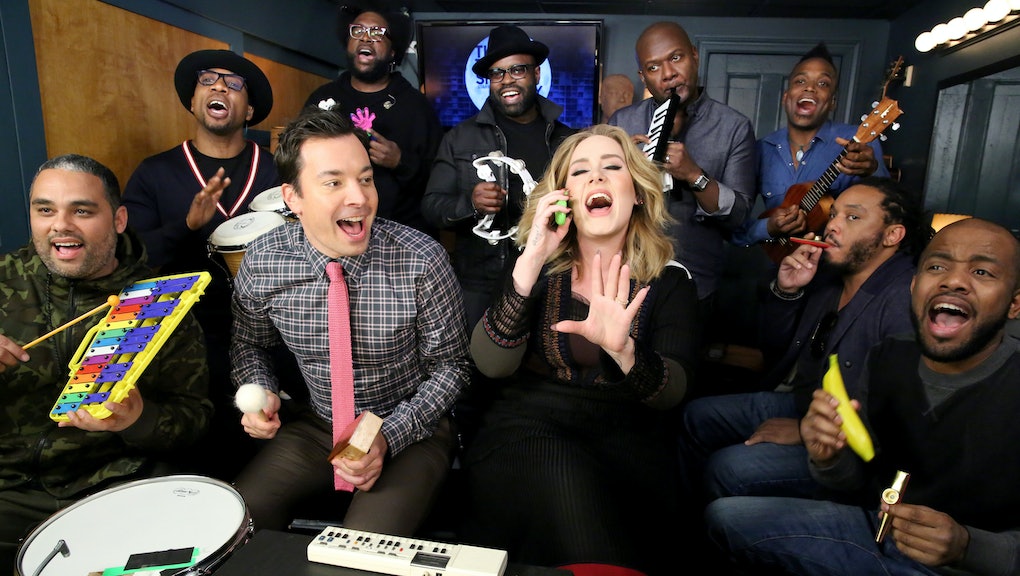 Fans and industry forecasters knew Adele's 25 was going to be a massive hit when it dropped on Nov. 20. However, few could have foreseen just how monumental her achievements would be when the dust cleared.

She shattered the first week sales record count, selling 3.38 million during the album's first week on shelves, according to Nielsen Music. The number is almost too monolithic to wrap one's mind around.

It's almost a million more than the previous record holder, NSYNC's No Strings Attached, which moved 2.42 million units first week in 2000. The boys held the record for a little over 15 years but handed over the crown with grace.

A tweet hardly does justice to the achievement. It doesn't capture how rare both Adele's and NSYNC's original records are. Looking at the two of them on alongside the rest of the United States' top ten, a picture begins to emerge.

Adele similarly took the throne in her home country, the United Kingdom, as well. Even though she sold far fewer copies — just over 800,000 copies — it still smashed the previous record of 696,000 set by Oasis' Be Here Now in 1997 (though that album only enjoyed an atypical three-day sales week). For the week, Adele sold more than the next 86 albums on the list of top sales combined.

She pulled a similar feat on the United States' album sales charts. According to Billboard, she sold more than double the combined total of Nos. 2-100 titles on the Billboard 200 album sales chart — including Justin Bieber's Purpose, One Direction's Made in the A.M and Taylor Swift's 1989. Swift's album is still in the top 20 more than a year after its October 2014 release.

Looking at it another way, out of all the 8.2 million albums sold in America last week, 41% of them were Adele's 25.

Speaking of Taylor Swift, the previous record-breaking princess of stream-averse pop stars, Adele's 25 trounced what Swift did with her 1989.

Both pop stars withheld their albums from streaming services in order to drive up sales — a strategy that can work wonders for the musical 1%, but few others. It launched Swift's 1989 to platinum status in a single week. It worked even more magic for Adele.

Beyond giving listeners a reason to dig out their CD players from out of storage, Adele also racked up some pretty striking achievements in the streaming space.

Her video for "Hello" broke the record for the most views on Vevo in a 24-hour period, again beating out Swift and her Hollywood budget "Bad Blood" video — which in turn broke Minaj's previous record in May.

"Hello" also became the first single to ever break a 1 million downloads in a single week, knocking the previous record holder, Flo Rida's "Right Round," right down off the record pedestal. It also topped Taylor Swift's "We Are Never Ever Getting Back Together," Kesha's "Tik Tok" and Taylor Swift's "I Knew You Were Trouble."

All this destruction was wrought within one week of 25's drop. It remains to be seen if it will have the staying power that Adele's previous 21 had.

That album has earned its fair share of accolades. It still holds the record for most weeks spent at No. 1 on the UK charts by a female solo artist, and earned Billboard's "Greatest Album of All Time" award earlier this November. If 25 can keep its momentum up, it may achieve even greater accolades.

25 has already sold more in its first week than 21 sold in its first 28, and nearly five times what it sold in its peak sales. It's also more than Adele's 19 sold in its entire seven years out in the world. From the looks of things, it seems Adele's career is growing up nicely.