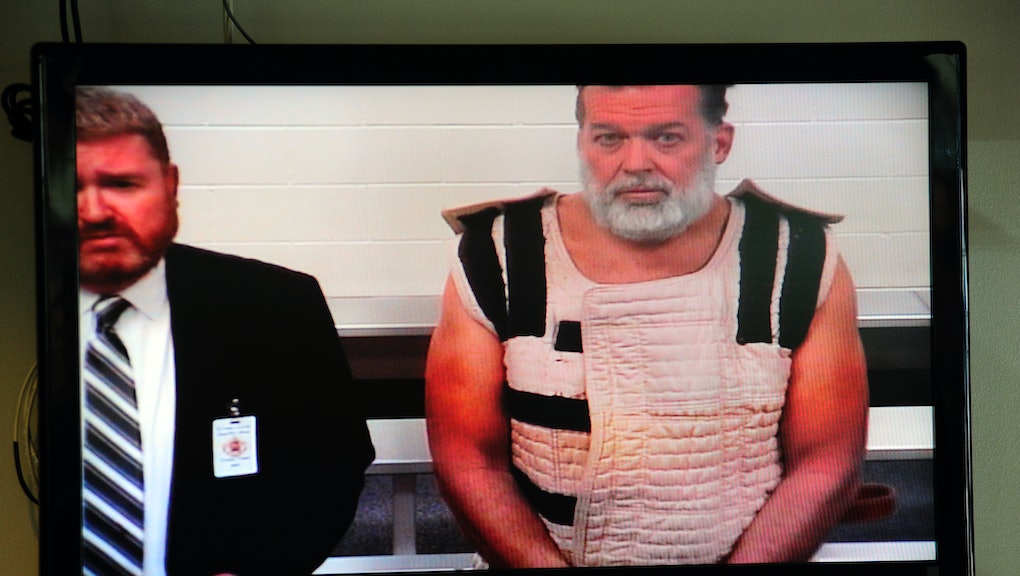 The House of Representative's top Homeland Security official does not think Friday's shooting rampage at a Planned Parenthood in Colorado that killed three people was terrorism. Instead, the Texas representative blamed a familiar Republican talking point — a "mental health crisis."

"It's a tragedy," Rep. Michael McCaul (R-Texas), chair of the House Committee on Homeland Security said during an appearance Sunday on This Week With George Stephanopoulos. "I don't think it would fall under quite the definition of domestic terrorism, although I'll leave that to the Justice Department to make that determination."

McCaul's sentiments were mirrored Monday by his party's presidential candidates, including Florida Sen. Marco Rubio, who appeared on a New Hampshire radio interview.

"We need to be more serious about how we address mental health," he said, according to the Tampa Bay Times.

And Republican presidential front-runner Donald Trump said political rhetoric over Planned Parenthood had little to do with the shooting, instead calling alleged shooter Robert L. Dear a "maniac."

While neighbors have told the media that Dear has a history of strange and frightening behavior, by invoking mental health Republicans appear to be trying to paint the shooter's motives — which appear to be linked to extreme anti-abortion views — with an almost mystic inscrutability. It's a tactic GOP politicians have used in the past when the question of the country's lax gun laws came up following mass shootings.

"There's a broader question here of how we make sense of someone's motivation. Is it terrorism because of the targets?" Georgia State University forensic psychologist John Horgan told Mic via email. "The kind of attack? Something the perpetrator says? Increasingly we define something as terrorism based on how we feel about it.

"We can distinguish say, a serial killer from a terrorist because the former is motivated largely by personal fantasies and doesn't really aspire to effect social or political change. The terrorist wants to be taken seriously, and wants to have some message by a wider audience. But there is a spectrum here with a lot of gray in the middle. The Unabomber was famously diagnosed a paranoid schizophrenic, yet this was disputed on several grounds."

Horgan also said the term "mental health" as it is commonly used with regard to mass shootings doesn't "necessarily imply mental illness, which in this context will matter in terms of competence and whether an insanity defense might be considered."

Dr. Rona M. Fields, a clinical psychologist who specializes in terrorism and violence against women, was more blunt. The Planned Parenthood attack, she told Mic, "terrorizes women, okay, and I guess [women] don't count as people who are victims of terrorism."

Fields said that determining whether the attack was an act of terrorism has less to do with the specific circumstances of the perpetrator and more with their actions.

"There's political violence committed by people who have mental health issues as well. It's still political. It's still terrorism. The intent is terrorizing people," Fields said.

"This was not just this time. There's been a campaign against Planned Parenthood and women's health centers for a number of years, and it was accepted as domestic terrorism years ago. Now why, all of a sudden, does Homeland Security see this as a mental health issue? Good lord."

"Terrorism and mental illness are routinely confused issues, and with good reason. We are as inconsistent and unreliable in our diagnoses for both," said Horgan.

"The idea that a person who is misogynistic has just a mental health issue?" Fields asked. "No. If he's misogynistic to the point of accepting violence as a legitimate action against women, he can be a terrorist. As soon as he starts shooting women ... he's a terrorist."

Horgan and Fields aren't the only ones who believe McCaul's explanation is inadequate to explain Friday's shooting.

"A 2001 study looked specifically at 34 adolescent mass murderers, all male," Duke University School of Medicine psychiatrist Jeffrey Swanson told ProPublica last year. "Seventy percent were described as a loner; 61.5% had problems with substance abuse; 48% had preoccupations with weapons; 43.5% had been victims of bullying. Only 23% had a documented psychiatric history of any kind ? which means 3 out of 4 did not."

Plenty of politicians, from Colorado Gov. John Hickenlooper to Republican presidential candidate and former Arkansas Gov. Mike Huckabee, have dubbed the attack domestic terrorism. Former Department of Homeland Security assistant secretary and terrorism expert Juliette Kayyem told the Public Research Institute, "It seems to me that what Robert Dear did satisfied every aspect of that definition."

Fields went one step further: "This is silently sanctioned violence if it's not recognized by Homeland Security."

Recent months have seen a rise in violence and threats against the nonprofit, after the videos released by the right wing Center for Medical Progress prompted some extreme rhetoric from Republicans.