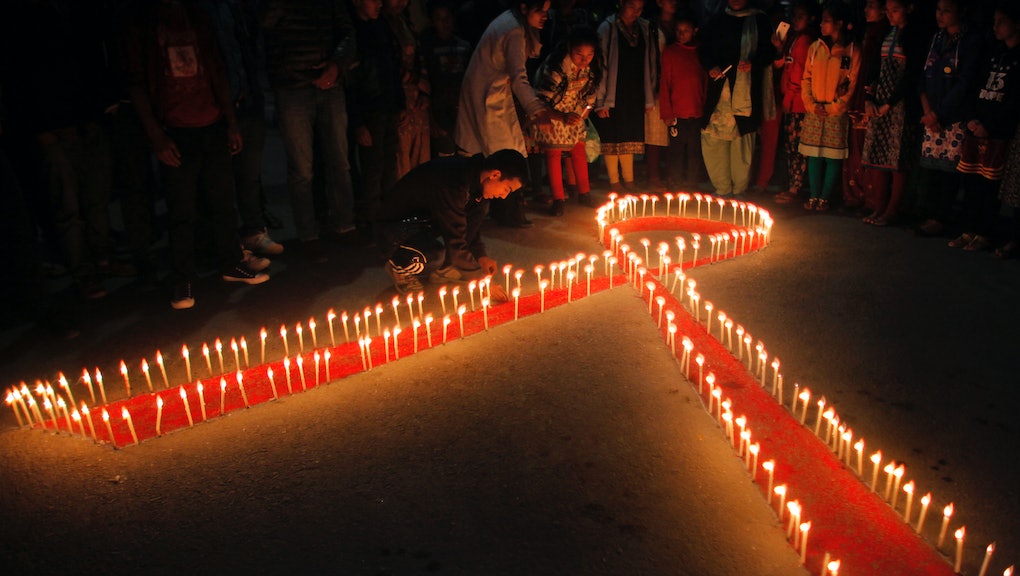 The global population is living in the midst of an HIV pandemic. Last year, 2 million new cases of HIV brought the total number of people living with the virus worldwide to 36.9 million, according to the World Health Organization.

Despite those staggering numbers, there's good news. Thanks to antiretroviral therapy — a regimen of drugs that lowers the rate at which HIV multiplies itself within the human body — those with HIV can expect a much longer lifespan than in years past. If people infected with the virus receive immediate antiretrovirals, they can live otherwise healthy lives and lower their risk of transmitting the virus to others. The WHO's website recommends antiretrovirals "for all people with HIV as soon as possible after diagnosis without any restrictions of CD4 counts" — also known as T-cells, the white blood cells that fight infections.

The United Nations is hopeful that antiretrovirals can help end the crisis. By 2020, it's aiming for 90% of people living with HIV to know their status, be receiving antiretroviral treatment and to have achieved viral suppression, or a very low level of HIV within the body. By 2030, it hopes to end the HIV/AIDS epidemic entirely.

But there's a major problem: Of the tens of millions of people living with the virus, only around 9% live in countries where antiretrovirals are provided to all people with HIV directly after diagnosis, according to a new report by a coalition of HIV/AIDS activists. "The 13 countries that offer immediate treatment to all people with HIV represent just 4.4% of the estimated global burden of 1.2 million AIDS-related deaths in 2014," it states.

"It's worse than a double standard," Asia Russell, executive director of Health Global Access Project, which is part of the coalition, told Mic. "It's a complete injustice."

Those statistics mean the majority of people with HIV can't get immediate access to potentially life-saving medication. Instead, they're told by healthcare providers to come back when their CD4 count has depleted to a certain level — sometimes as low as 200, the stage at which HIV is said to have progressed to AIDS. At that point, patients have often contracted tuberculosis, cancer or brain infection, Russell explained.

Just in time for World AIDS Day, a coalition of activists, clinical providers and people with HIV are pressuring governments and donors to help bridge that gap — to make immediate antiretroviral treatment available in the countries that most desperately need it. By the summer of 2016, when the International AIDS Conference will take place in Durban, South Africa, the activists are demanding that all countries meet the WHO's guidelines and offer antiretrovirals as soon as people are infected with HIV.

"No person living with HIV should be told to wait until they become sicker to receive treatment," the coalition wrote in its report. "We envision a world where everyone has access to effective, high-quality care from the moment they are diagnosed."

For those services to become available takes "more than a wave of a magic wand," Russell said. Financially, two things need to happen: Donor governments will have to increase the amount of money they put toward international AIDS response, and in the countries that deny patients adequate care, domestic investments must be expanded.

"You can't end the epidemic with the same amount of money that's coming in now," Russell said.

But that's not all. Affected countries need to ensure they have community health workers who can scale up testing programs, so that more people learn their status and how to get treatment. There also needs to be more nurses trained to work with HIV patients, so that countries can expand their capacity to offer treatment — among other factors.

But should those countries eventually succeed in making antiretroviral treatment immediately accessible, a big question remains: Given the stigma attached to HIV/AIDS, particularly in Sub-Saharan Africa, might not people still be scared to actively seek treatment, even if it becomes more available?

According to Russell, "Access to treatment has had a profound effect on lessening stigma when it comes to HIV."

"Communities experiencing people living healthy lives and being openly positive has a profound effect," she said. "It educates those who are stigmatizing — it challenges their beliefs and their narrow, myopic views that people with HIV are a certain way."