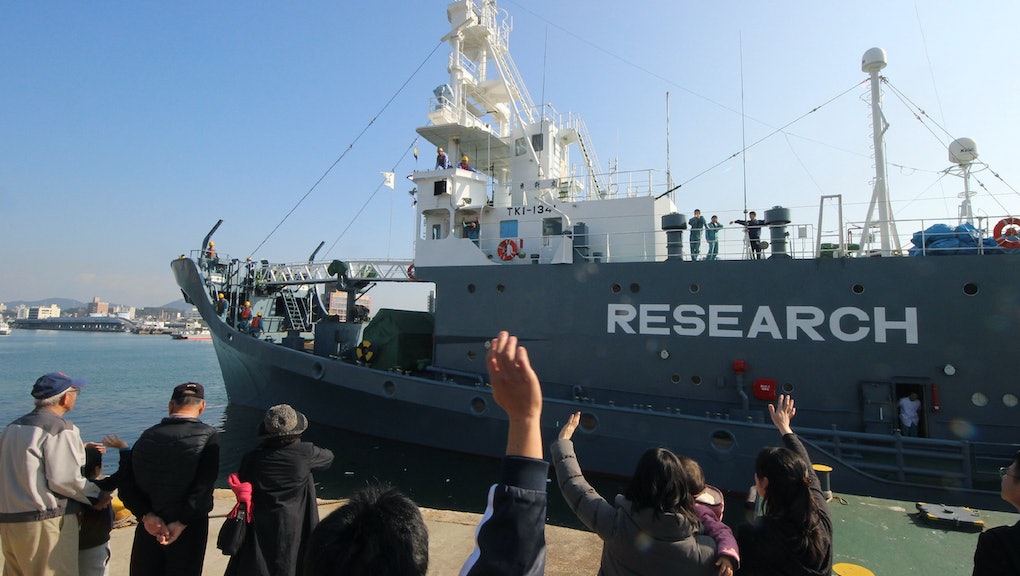 George Costanza would be none too pleased.

Japan embarked on what the government alleges is a scientific research mission in the Antarctic Ocean early Tuesday to study whales. It will involve killing 333 minke whales per year for the next 12 years.

But the United Nations, conservation nonprofits and numerous other countries are decrying the mission, calling it a thinly veiled excuse to resume illegal, commercial whaling. Whale meat has long been a part of Japanese cuisine.

In March 2014, the International Court of Justice, the United Nations' primary judicial entity, issued Japan a stop order for its research.

"Japan shall revoke any extant authorization, permit or license granted in relation to JARPA II [the whale research program], and refrain from granting any further permits in pursuance of that program," the court said.

But the order has since been ignored.

"Taking account of the judgment by the International Court of Justice in the case concerning the 'Whaling in the Antarctic,' Japan has reviewed its policy on whaling based upon international law and scientific evidence, as well as upon its sincere stance towards conservation and management of whale resources," the Japanese Agriculture, Forestry and Fisheries Ministry said in a statement last year.

The ministry explained the review was conducted with the intention of continuing its whale research and was part of an assessment to understand if and how their programs needed to be amended.

Japan's response has been less than satisfactory to many countries in the vicinity. "Australia strongly opposes the decision by Japan to resuming whaling in the Southern Ocean this summer," Greg Hunt, Australia's environment minister, wrote in statement published on his website Saturday.

"We do not accept in any way, shape or form the concept of killing whales for so-called 'scientific research' ... there is no need to kill whales in the name of research. Non-lethal research techniques are the most effective and efficient method of studying all cetaceans," he wrote.

Meanwhile, a fisheries official told Agence France-Presse, "As we seek to resume commercial whaling, it is crucial to get information as to whales' migration, reproductive rates and the age pyramid of the population for setting catch quotas," adding that killing the whales is the only way to acquire the "essential information" the industry needs.

A nonprofit New Zealand-based environmental conservation organization, Sea Shepherd, has joined the chorus in condemning Japan for its decision.

"We would like to remind the Japanese government that the whales of the Southern Ocean are protected by international law, by Australian law and by Sea Shepherd," Capt. Alex Cornelissen, the organization's CEO, said in a statement issued Sunday. "As such, any violation of the sanctity of the Southern Ocean Whale Sanctuary or the Australian Whale Sanctuary will be regarded as a criminal act."

The group has cultivated a reputation for itself in part by attempting to disrupt whale hunts.

The international ban on whaling introduced in 1986 left few exceptions, but scientific research is one of them. Japan has thus far claimed legitimacy in its whale research by, the government argues, successfully navigating legal restrictions. Nonetheless, Japan finds itself entering murky waters.