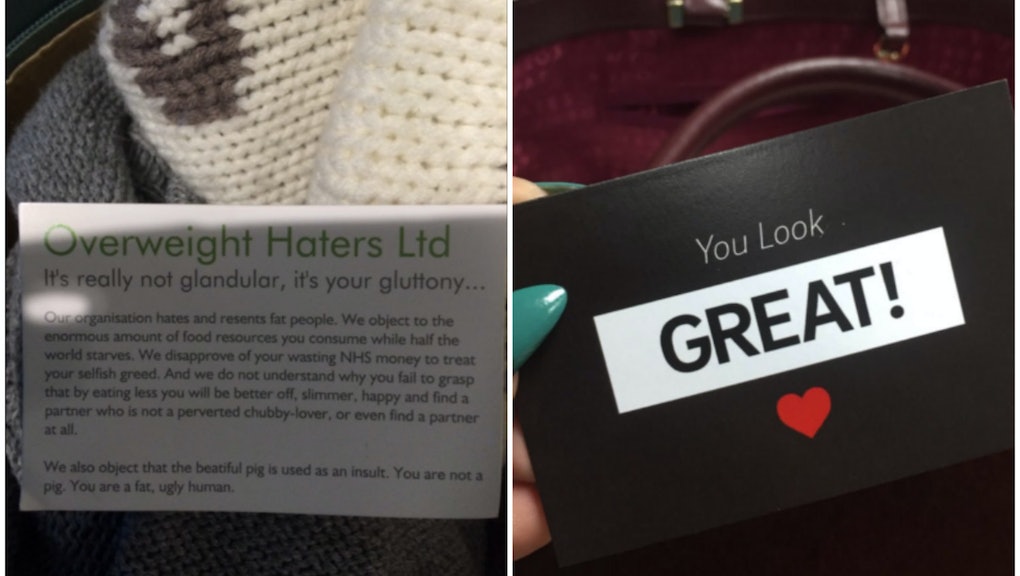 Fat-Shamers Hand Out Nasty Cards on Subway, So Plus-Size Company Has Awesome Response

Over the weekend, the rudest man alive entered the London tube and handed a young woman, Kara Florish, a card.

Written across the top of the card was the name of his group, "Overweight Haters Ltd." Printed below that was a lengthy explanation of the organization, beginning with the charming sentiment, "Our organization hates and resents fat people. We object to the enormous amount of food resources you consume while half the world starves."

Florish immediately took to Twitter to call out the random act of rudeness and the card itself. The Internet soon took notice, with even more witnesses saying they'd seen other women handed the same card, prompting The Cut to ask, on behalf of all of us, "Can we abandon Earth now?"

But rather than accept that there are truly repulsive people in this world, one woman and a plus-size clothing company banded together to flip the organization's cowardly card tactic on its head.

Bethany Rutter, a plus-size journalist who runs the blog Arched Eyebrow, decided to take the concept behind the fat-shaming card and turn it into an empowering message. On Monday, she tweeted out a plan: to print out cards saying "You look great today!" and distribute them on the tube.

"I love giving and receiving compliments, and a random compliment from a well-intentioned stranger (not a creepy dude, obviously) has been known to make my day," Rutter told Mic. "I heard about this horrendous fat-phobic campaign of hate on the London underground and thought it was the perfect opportunity to get started on this!"

As Rutter's tweet started to get more attention, more stories from women who have been publicly shamed for their weight started rolling in.

Thanks to all the tweeting, one of Rutter's colleagues who works at the plus-size clothing company Navabi reached out. "My colleague saw what I was saying and thought we were well-positioned to do something about it, [like] paying to have the cards printed without any Navabi branding," said Rutter.

So that day, she dashed out of the office, and with the design help of Navabi's chief marketing officer Dan Barker, printed out 200 cards with the phrase "You look great!" and a tiny red heart.

Navabi tweeted the cards out and posted it to the company Instagram as well.

They even went so far as to offer the woman who was handed the original card, Florish, a full free outfit.

According to Rutter, the responses from people she handed the cards to were overwhelmingly positive. "Across the board the reaction was good," she said. "A couple of people asked me what it was about and said they thought it was a great response. Some just took them and said thank you for the compliment!"

And because sometimes there is justice in the world, the organization behind the fat-shaming cards is now being investigated by the police, according to the Guardian, who are asking for people who have received the cards to come forward.

In one final act of vengeance, Navabi took it one step further and claimed Overweight Haters' domain name as their own. Head on over to OverweightHaters.com, and you'll see that Navabi has written the story behind the cards and offered fans the opportunity to print out their own.

"We set up OverweightHaters.com with our message of positivity," Barker told Mic. "The site gives people the card templates in case they wanted to print some themselves (zero branding, no mention of gender or size, just 100% good vibes). We put the site live first thing [Tuesday] morning and it's had thousands of visits."

Payback is so damn sweet.