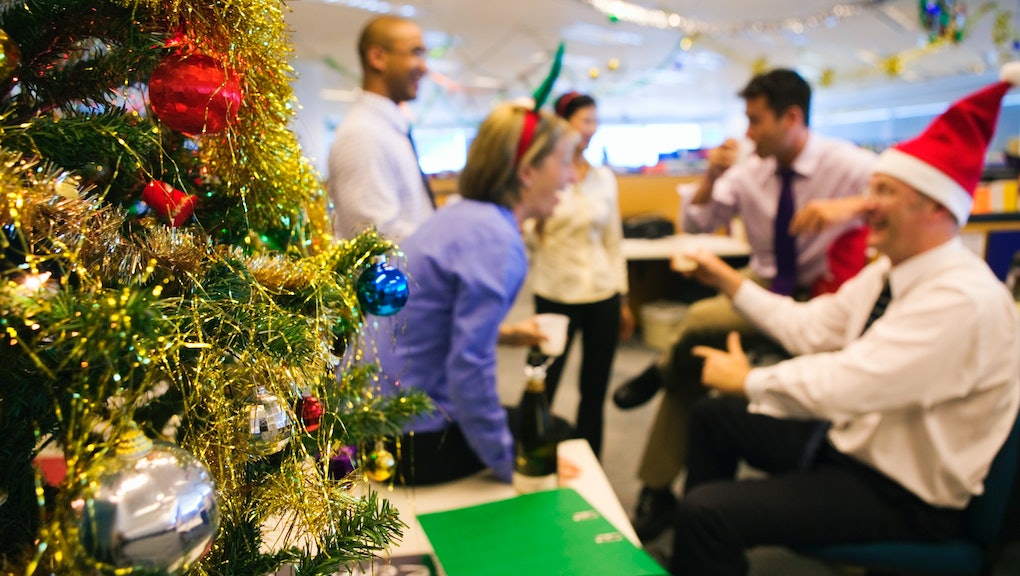 Planning to Boink Your Colleague at the Office Holiday Party? You're Not Alone

In news that will either be very shocking or very obvious to you (depending on your personal experience/ willingness to circumvent your office's HR guidelines), a U.K. survey has determined that inter-office hookups see a significant boost during company Christmas parties.

A merry 39% of 2,000 survey respondents said they'd straight-up banged a coworker at the actual office holiday shindig, with 54% admitting that they've at least "snogged" a colleague at the annual event. (Snogging is British slang for "kissing and caressing amorously," natch.)

This jolly new research comes to us from lingerie and sex toy retailer Ann Summers, which commissioned a survey of U.K. adults to find out how many had engaged in any Yuletide sexcapades. Apparently, the answer is: quite a lot! In fact, according to the company's map of steamy office hookups, people reported boning in a wide range of workplace locations, including the company parking lot, the board room, a stairwell and, of course, the boss's office.

"For those daring enough, a secret trip to the boss's office for mind-blowing sex is the best way to end the night," the company said in a release emailed to Mic. "Just make sure you don't get caught!" Yes, that would be wise.

But lest you think these hookups are all drunken, one-time flings, another survey focused on the mating rituals of employees at office holiday parties (a burgeoning field of market research!) said that's not the case. In a survey of 2,000 U.K. women commissioned by the company CB12 First Class Breath, a number of these inter-office hookups have led to longer-term relationships.

So if you're single and ready to mingle (and... sorry... JINGLE!), then you may want to keep the office holiday party in mind as the perfect place to catch some good holiday D. But if you're not as lucky as those 1 in 7 women for whom it actually worked out for in the long run, you might want to consider adding "Get new job" to your list of 2016 New Year's resolutions. Otherwise you may be in for many awkward staff meetings in which you and Bob accidentally make eye contact under the unforgiving fluorescent lights of the conference room.