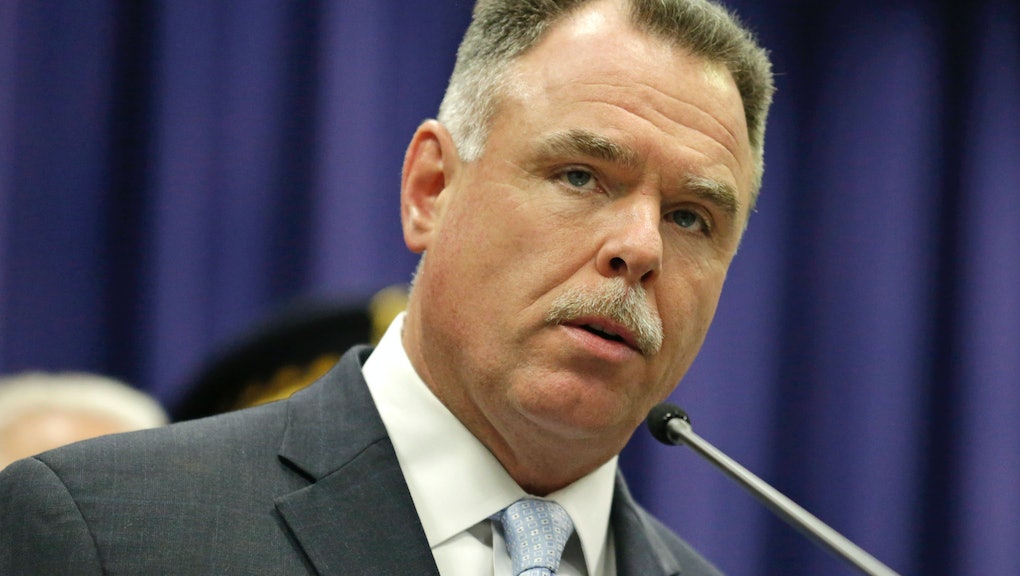 Chicago's Police Superintendent Garry McCarthy was fired from his job by Mayor Rahm Emanuel, sources told the Chicago Sun Times on Tuesday. The superintendent had been under fire following the Chicago Police Department's release of video showing Officer Jason Van Dyke shooting 17-year-old Laquan McDonald 16 times as McDonald walked down the street. The officer, who has been charged with first-degree murder, continued shooting McDonald even after the teenager was laying on the ground.

McCarthy's office had originally claimed that McDonald had approached Van Dyke with a knife. That account was only refuted after dashcam video showed the true nature of events.

According to reports, McCarthy met with Emanuel at City Hall on Monday, but the final decision to oust the superintendent came overnight. The move comes after an essential crisis of confidence in the department which, on Tuesday, culminated in a Chicago Sun Times op-ed calling for McCarthy's removal.

On Tuesday, Mayor Emanuel announced the formation of a task force specifically dedicated to police accountability. "This task force is long overdue to bring much-needed reform in the city of Chicago," Steven W. Hawkins, executive director of Amnesty International USA, said in a press statement. "We will bring our own findings and recommendations to this task force to ensure that Chicago police meet their obligations under  international human rights standards that make it clear that lethal force should only be used as a last resort."

News of Van Dyke's indictment did little to quell outrage in the community. After the video was released, protesters took to the streets demanding action from the city. Just after the Thanksgiving holiday, they marched down the city's "Magnificent Mile," one of Chicago's busiest shopping area.

"There will be a lot of different kinds of people here. We're calling for peaceful protests," chairman of the Leaders Network of Chicago the Rev. Marshall Hatch told local station WLS. "But the reality is we don't know all of the different groups that will show up today. But certainly, we're encouraging people to be peaceful." The protesters demanded major reforms of the city's criminal justice system.

In April the City of Chicago reached a $5 million settlement with the McDonald family and has also delivered another $5.5 million in compensation to victims of police violence in previous eras of the force's history.

So far none of the other officers with Van Dyke who witnessed McDonald's death have been charged with a crime.