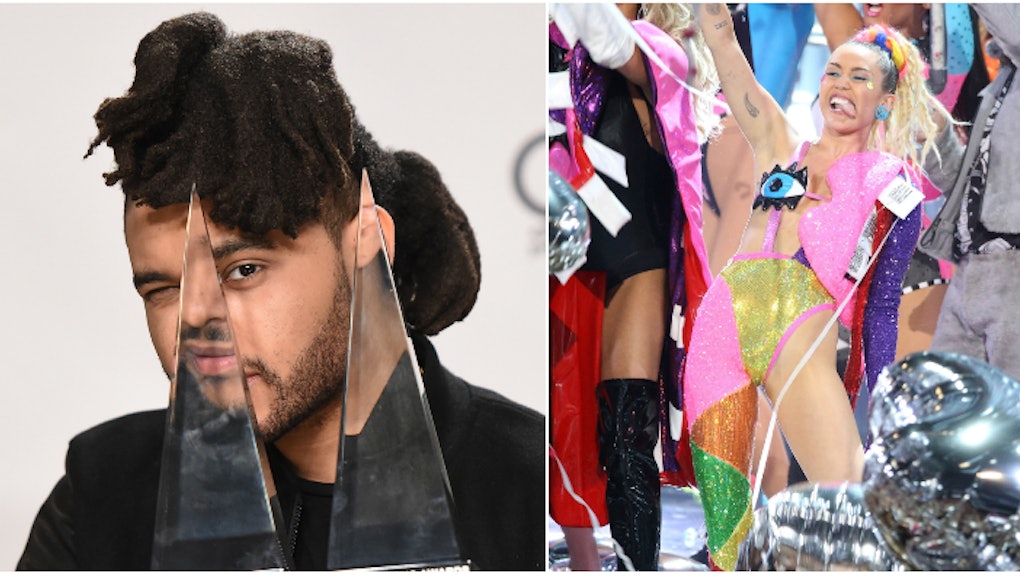 2015 has been an incredible year for music, but it's also been one of the weirdest. We've gotten next to none of the albums we expected to be released this year — no Rihanna, no Kanye, no Frank Ocean — while simultaneously getting everything we never could've dream of. At so many points this year, artists just seemed to be throwing smatterings of ideas at the wall, hoping something was left sticking after critics and fans had their way with it.

On some of those mornings after, it was still looking pretty, like with Run the Jewels' surprisingly lithe Meow the Jewels album made entirely with cat sounds. Other mornings it was like trying to clean up after Black Wednesday, like Miley Cyrus' dabblings in mixtape psychedelia.

It's been exhilarating to watch, and even more exciting to try to predict — and often extraordinarily difficult to explain. Here are 13 of the most out-there musical occurrences we saw this long, strange year.

Perhaps the world should have seen 2015's madness coming, based on the fact the first new song that dropped was a collaboration between Kanye West and Paul McCartney.

West and McCartney's "Only One" debuted at midnight heading into the very first day of the year, catching hip-hop completely off guard. Later that month, the duo upended pop in a similar way with "FourFiveSeconds," supporting Rihanna's vocals — one of the only bright spots in her extraordinarily messy year-long album rollout, which still hasn't amounted to an album.

Luckily, there might be more to come from McCartney and West. Rumor has it they've recorded up to nine songs together. The word will find out when West's So Help Me God, or SWISH, or whatever it's going to be called, finally drops.

In similar, but far more disorienting news, empire-maker Taylor Swift managed to entice one of hip-hop's most promising lyricists, Kendrick Lamar, to record two verses for a remix of Swift's "Bad Blood."

Swift has been a self-proclaimed Kendrick stan since September 2014, when she told Rolling Stone his "Backseat Freestyle" is her go-to song when she needs to feel empowered. However, their chemistry didn't feel nearly organic as one might have hoped.

It seems to have started a trend, though. During a November interview with etalk and Adele expressed her admiration for and desire to remix Drake's "Hotline Bling." Shortly thereafter, Drake Instagrammed a cartoon of the two of them together, possibly confirming another high-profile remix of the song is in the works. It's all further proof that the line separating pop and hip-hop is about as transparent as it ever has been.

Swift had a tumultuous year. On the one hand, cracks began to show her formerly pristine pop career's veneer, drawing rounds of criticism the likes of which the artist had never seen before. On the other, she received some of her highest praise for her musical abilities — the most flattering coming from folk songwriter Ryan Adams' top-to-bottom cover of her 2014 blockbuster, 1989.

It's a strange piece that turns Swift's bright-eyed and optimistic album into a thoroughly meditative and depressing affair. However, it only showed how dynamic Swift's compositions actually are.

The band behind the "most punk album of 2014" dropped an album made almost entirely out of cat sounds.

Last year, publications praised Run the Jewels' aggressive, funk-fueled, yet dissonant, brand of political rap captured on their album Run the Jewels 2. Noisey went as far to call it the most punk album of 2014. So what did the band go and do this year? After a joke El-P told about remixing the album with all cat sounds went viral, and a fan created a Kickstarter to actually make it happen, Run the Jewels actually recorded and mixed Meow the Jewels.

It attracted some talented producers to the project, including Just Blaze, Boots and Geoff Barrow of Portishead. The end product was like catnip for the hip-hop fan who's jaded with rap radio.

Dr. Dre released an album — but it wasn't Detox.

After 16 years of rumor, hype, delays, more hype and a hell of a lot of disappointment, hip-hop seemed ready to give up on Dr. Dre and the would-be behemoth album Detox. But then, out of nowhere in August, the completely unexpected: Detox was dead, and its place fans would be getting Compton, a companion album to the N.W.A biopic Straight Outta Compton. The album served a reminder of Dre's incredible skill at the mixing board and unparalleled ability to spot rising talent. Despite its occasional glaring misstep, it's remained one of the strongest hip-hop releases of the year.

To follow up her 2013 platinum record Bangerz this year, Miley Cyrus straight-up slummed it, releasing a psychedelic mixtape like a starving Pitchfork artist. Collaborating with her creative spirit animal, as Cyrus essentially described Flaming Lips' frontman Wayne Coyne in a interview with the New York Times, the album Miley Cyrus & Her Dead Petz was a indulgent, colorful mess of 23 songs with very little of the hip-hop that defined her last album. Unfortunately, critics weren't too kind to it.

Vinyl is definitely back in style. Surprisingly, it's growing so fast it's outstripping streaming in the United States market. According to an RIAA mid-year report, vinyl brought in $221.8 million, a 52% increase from the previous year. Ad-supported streaming, on the other hand, brought in $162.7 million in revenue, a 27% increase. It's growing twice as fast as premium streaming too, at 24.9%, though it's not bringing about half the revenue. The question remains for 2016: Will the vinyl bubble burst?

Kanye West announced his intention to run for president.

The audience at the 2015 MTV Video Music Awards stood transfixed as West took the mic to receive his video vanguard award and gave a speech that essentially boiled to a 15-minute-long "fuck you" to MTV. It ended in with rhetorical fireworks: "And yes, as you probably could have guessed, I have decided in 2020 to run for president," West said. The best part is, a lot of people seemed to take him pretty seriously afterward. Many began to voice support for his presidency, like radio DJ Charlamagne Tha God, who asked the most relevant question:

Lil B was on CNN.

During one particularly slow news day in August, rapper Lil B appeared on CNN to talk politics. The rapper is more well known for pioneering swag rap, his cooking dances and cursing the athletes that steal them than his political savvy, but his love for Bernie Sanders is evident and deep-rooted.

"I was really seeing that Bernie was a part of fighting against segregation and that really touched my heart," Lil B said on air, discussing his switch from supporting Hilary Clinton to Sanders. "Hillary Clinton is not cursed," he added. "I'll continue to watch and see, but no. All love to Hillary."

As Uproxx noted in a recent piece, Bieber has been making some pretty good music for quite some time, but most serious music fans were too proud to listen and admit it. That changed in a big way in 2015 with the release of Bieber's Purpose. It produced the biggest hits of Bieber's career so far, with "What Do You Mean?" being his first song to ever hit No. 1 on Billboard.

The strength of the album made up for how tedious the rest of his apology tour turned out to be. It hasn't been easy, but popular culture has been slowly admitting to itself Bieber is more than just a series of hilarious haircuts for non-famous people to mock.

A former member of One Direction earned praise from Frank Ocean's producer.

Instead of a new Frank Ocean album, we got something much stranger: his former producer Malay praising the talents of Zayn Malik, recently departed member of One Direction. Malik left the boy band earlier this year to go solo, and has since gotten only stellar reviews from those who have worked with him. "Pure genius. An artist's artist. A shining star with a genuine [heart emoji]," were the words Malay shared on Twitter. Malik also earned the support of Odd Future leader Tyler, the Creator, who apparently has some "beautiful instrumentals" for which Malik would be perfect.

After teasing her return with a subtle commercial during a broadcast of The X Factor in October, Adele returned to music in November after a three-year absence and absolutely blew the world away. She came out of nowhere. There was an October 2014 tweet, suggested that we might get 25 album before the year was out, but nothing but silence followed. Only after the artist turned 27 in May, did she drop 25 and break sales, download and streaming records across the world. The world's hearts, though, may never recover.