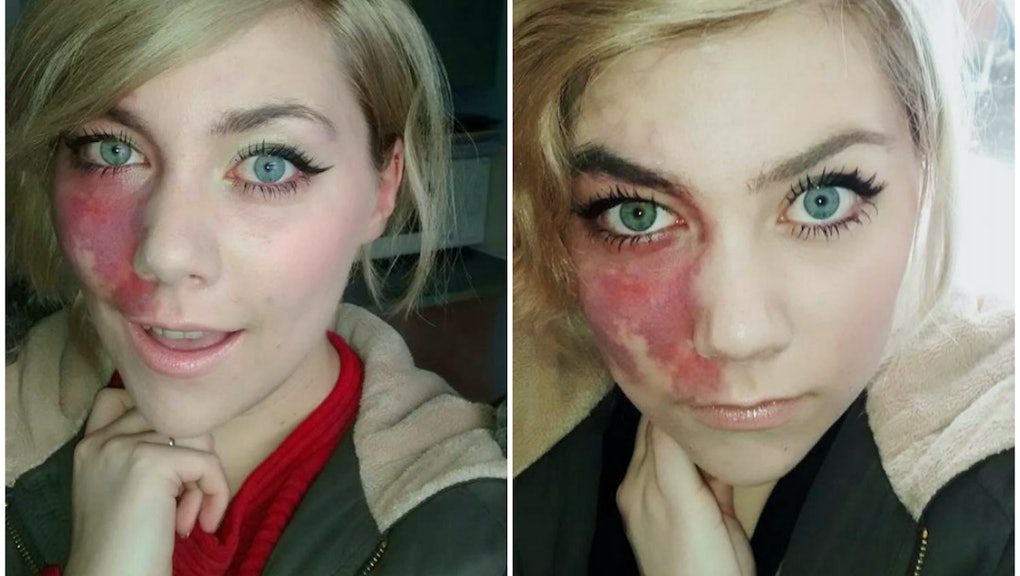 Soon, the images started getting thousands of likes and racking up hundreds of comments, ranging from "That's super badass" to "I imagine it can be tough to live with. But it's hella cool, if I'm honest." The photos also garnered more than a few bad jokes, including, "No officer, it's a birthmark" and "Is she the girl who dated Chris Brown?"

It caught Harford, who lives in Staffordshire, England, completely off-guard because, well, she didn't really think anyone would be looking at the photos.

But instead of taking down the images, Harford decided to make the best out of the mix-up to bring attention to the beauty of being different.

Harford wrote that she has heterochromia iridum, meaning her eyes are two different colors. She also has a prominent birthmark across the entire right side of her face. In a second post, Harford offered her admirers an explanation:

So when I made my last album I hadn't used imgur before and had absolutely no idea that it would be so public. (Yeah, I know, dumb.) So I'm remaking this one to answer questions because I'm used to people being very curious.

After posting the images, Harford ended up talking about her makeup techniques and favorite products, along with what it's like to live with such a visible birthmark on her face. Most people think it's a bruise, she said, and she's not self-conscious about it at all.

Although she wears foundation and concealer like any other girl, she doesn't tend to cover up her birthmark, which she made clear when a commenter asked her why she didn't conceal it.

"Lol okay so, I don't need to hide my birthmark," she wrote. "I have blemishes and mild acne, which isn't a birthmark, so I'd cover that birthmark or not."

According to Harford, a freelance digital artist and illustrator, she hadn't realized that she looked different from other people until she was about 9 years old.

"Up until that day I never noticed it," she told ABC News. "It was probably because of the ignorance of a child."

As ABC News notes, part of Harford's motivation for posting more images was because she had just turned down yet another offer to be on the British television programs The Undateables and Too Ugly for Love?, both of which focus on young single people with medical conditions. For two years in a row, they had reached out to her and asked her to participate, which didn't sit too well with Harford.

In proudly posting her pictures on the Internet, Harford is single-handedly showing those executives and the world that a birthmark really isn't a big deal at all. As another commenter noted, "Gal I went to school with [someone who] had one like yours. I regret often how I treated her." To which Harford responded: "This post made me happy. Like, in the way of you admitting that. I hope she's happy too, but also proud of you. :)"

"It was really amazing in terms of the fact that I've always wanted to raise awareness; I just never figured out how," Harford told ABC News. "The next time they see someone with a birthmark they won't forget. They'll know what it is and they won't get freaked out."