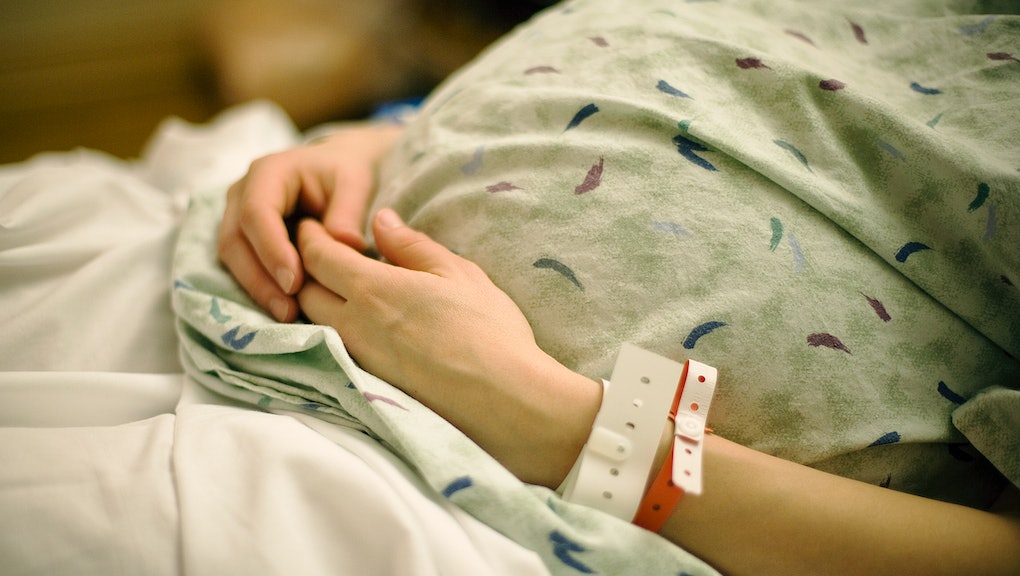 With two kids and another baby on the way, Rebecca Chamorro decided her family was complete. After deliberating with her family and her doctor, she elected to have a tubal ligation immediately following her C-section at the end of January, scheduled to take place at Mercy Medical Center in Redding, California.

The rural Catholic hospital, however, denied Chamorro's request — because the church doesn't approve of women getting their tubes tied.

In a lawsuit filed on Chamorro's behalf on Monday, the American Civil Liberties Union (ACLU) announced it is suing Dignity Health, the Catholic hospital network to which Mercy belongs, claiming the refusal to provide a physician-approved tubal ligation is discriminatory and violates California law. According to the suit, Dignity has allowed women to undergo postpartum sterilization in some cases despite church guidelines, which the hospital cited in its refusal to grant Chamorro's request.

The network claims it rejected her tubal ligation based on the Ethical and Religious Directives for Catholic Health Care Services, known as ERDs, a set of health care directives outlined by the U.S. Conference of Catholic Bishops that forbids direct sterilization. ERDs also ban some prenatal genetic tests, other forms of contraception and abortion — even when a woman's life is at risk — because they are "intrinsically immoral."

The ACLU contends that by providing tubal ligations for some patients, but refusing others because of ERDs, Dignity is breaking the law by discriminating against women.

"Although both men and women may obtain sterilization procedures, the harms imposed by denying such procedures fall disproportionately on women, because women bear the brunt of reproductive health care costs," Ruth Dawson, a staff attorney for the ACLU representing Chamorro, told Mic. "Denying women access to basic reproductive health care options such as getting their tubes tied effectively discriminates against women and undermines the promotion of public health."

But the hospital's intervention in Chamorro's decision isn't just about California law, nor does it just affect one woman and her family. It illustrates one of the many ways the Catholic church interferes in women's reproductive choices.

Catholic hospitals and medical groups, which have grown in number in recent years and provide a significant proportion of health care services across the country, have been criticized (not to mention sued) for applying religious doctrine to impede women's access to abortion. As the ACLU's lawsuit against Dignity shows, though, the issue isn't just with terminating pregnancies: Catholic health care providers also attempt to curtail other reproductive rights like getting tubes tied, even when that means ignoring a doctor's blessing for lack of a priest's.

While the lawsuit only includes Chamorro as a plaintiff, it notes she's not the only patient to be turned away for sterilization because of ERDs. Her obstetrician, Dr. Samuel Van Kirk, "estimates that he has had at least 50 patients in the last eight years for whom he has sought but been denied authorization to perform immediate postpartum tubal ligation," according to the suit.

"Denying women access to basic reproductive health care options such as getting their tubes tied effectively discriminates against women."

"This case is an example of a Catholic hospital and its hospital administrators practicing medicine," Dr. Pratima Gupta, an OB-GYN for Physicians for Reproductive Health, an organization acting as a plaintiff in Chamorro's case, told Mic. "I think they should leave that to myself and my colleagues and medical experts, and not impose religious directives on patients."

According to Gupta, the church's broad-sweeping health care regulations can conflict with medical best practices, thereby putting women's health at risk. While many physicians work to empower their patients when it comes to making choices about their health, she said, Catholic hospitals can effectively disenfranchise them.

"A women assesses her options with her doctor and together they come up with the best decisions," Gupta said. "But then the Catholic church or hospital intervenes and decides what can and cannot be done, which is going to result in a woman not getting the best care for herself, or what she wants.

"It is denying women the basic right to control their bodies," she added, "and decide what's best for themselves."