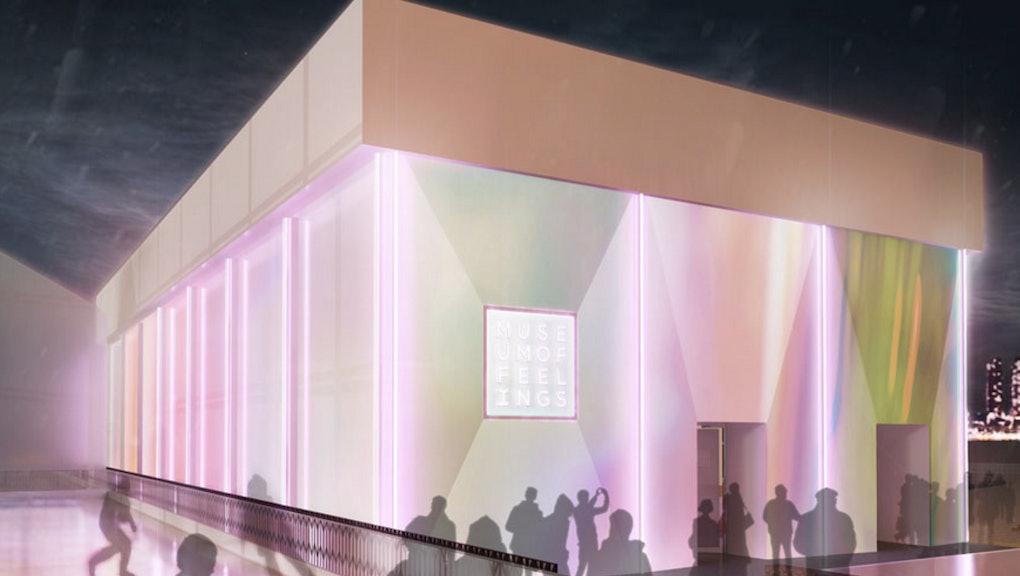 No one at the Museum of Feelings, a color- and scent-saturated pop-up exhibit in New York City, wants to tell you the whole thing was cooked up by Glade, a fragrance company. The guides, mostly female and clad in clubbing attire, didn't mention it before my tour started, and the only time it came up was when I specifically asked. Many other visitors appeared unaware of the sponsorship. Midway through, a woman near me pointed to a vent belching a plume of air freshener. "What's that stuff?" she asked her companion. "Looks like perfume or something."

The Museum of Feelings is aggravatingly difficult to find. It's perched in downtown Manhattan beneath the shadow of the Freedom Tower, adjacent to an ice-skating rink and a chic shopping complex. No signs will point you there.

More covert than the museum's location is its origin story. It was cooked up by household-scent giant Glade to encourage "brand awareness," as one perky guide told me when I visited on Tuesday. Indeed, a quick glance at Glade's Google result description ("Welcome to your best feelings, inspired by your favorite fragrances") and the sponsor bar of the bottom of the exhibit's website confirm this.

The exhibition is made up of five separate, sequential rooms. Each is named after a feeling and matching scent profile. The rooms are called, in order, Optimistic, Joyful, Invigorated, Exhilarated and Calm. The fragrances, suitably, are nauseatingly sweet. Upon walking into Exhilarated, for example, I was hit with a wave of "blooming peony and cherry."

Each room is its own distinct world, and all look like something out of a second-rate Wonka's Chocolate Factory. Joyful, the second room, is intended to invoke feelings of Christmas cheer. It's set up like a forest, with a path cut through a thicket of glowing green strands hanging from the ceiling. It's the most impressive room, but as the Awl points out, the idea was probably borrowed from actual art.

Exhilarated, the other marginally interesting room, was the fourth stop. It was like walking into a giant floral kaleidoscope — I overheard one teenager tell another teenager she was glad she was sober, lest she experience a sensory overload — but the room was small enough to trigger my apparently latent claustrophobia. By this point, my brain and lungs had been pumped so full of chemically tinged air freshener that I was also feeling woozy.

By this point, my brain and lungs had been pumped so full of chemically tinged air freshener that I was also feeling woozy.

While most people around me were disconcertingly enthusiastic about the whole shebang, some were less convinced. "It feels like a Scientology center," a bearded man said to his friend. "You become a fourth level thetan!"

Eager to escape into the short walkway between rooms — it was less perfumed, and thus much more preferable — I walked toward Exhilarated's exit. I was met with a cluster of people waiting in line to enter Calm, the fifth and final room. We were all stuck in what I can only describe as the worst game of Seven Minutes in Hell ever played.

Alas, more was yet to come.

As we moved slowly out into the walkway, our guide talked us through the Calm room on the other side. "Don't sit on the floor," she advised, before chirpily encouraging us, "Take a fantastic selfie!" (Complete with a unique hashtag, of course, led by the sponsored tweets of reality TV stars.)

The curtained entrance only served to obscure the horrors within: a small, purple, half moon-shaped room full of billowing clouds of lavender-inspired room spray. It was so thick it looked like dry ice, and I could barely see the floor beneath my feet. That's why they tell you not to sit down, I thought. You'll probably never make it back up.

The Museum of Feelings was anything but. Despite the name, the connection between the Museum of Feelings and actual feelings is vague at best. It was perhaps clearest in Invigorated, where each person's emotions and auras were supposedly picked up and translated into bright, shape-shifting outlines on the floor.

Instead, the exhibition's strongest feelings-y link involved a hashtag — a fitting cherry on top of a heaping sundae of crafty marketing. At the conclusion of the tour, visitors are ushered into a bright-white and mercilessly spray-free room, where they're encouraged to take a "mood selfie."

It's easy. You stand in front of a photo kiosk, pose, wait for the camera to snap a photo and place your hand on the mood sensor. The machine reads your bodily indicators — "It's kind of like a polygraph," one guide told me excitedly — and then chooses your color. Post it to social media with the Lo Bosworth-approved hashtag #MuseumofFeelings, and you can share your innermost emotional state with thousands, maybe millions of people. It might even end up on the official website.

"We've got a backup between exhilarated and calm!" one annoyed-looking guard barked into a walkie talkie as I struggled toward the exit. I did not purchase the $9 candle the museum was selling. "That was the perfect marketing scheme, man! The greatest," a man said next to me, shaking his head.

As I walked out, I decided to set my cynicism aside and do something true to the museum's name: catalogue my feelings. In no particular order, they were as follows: rage, confusion, despair, claustrophobia and grudging respect for Glade's marketing abilities.

Mostly, though, I felt pity for the poor souls stuck in line outside in the cold, rainy evening, winding around the pop-up "museum" from hell, waiting to enter a land of corporate opportunism masquerading as innovation.

Run, I felt like saying. You'd be better off huffing a Glade candle at your local CVS.