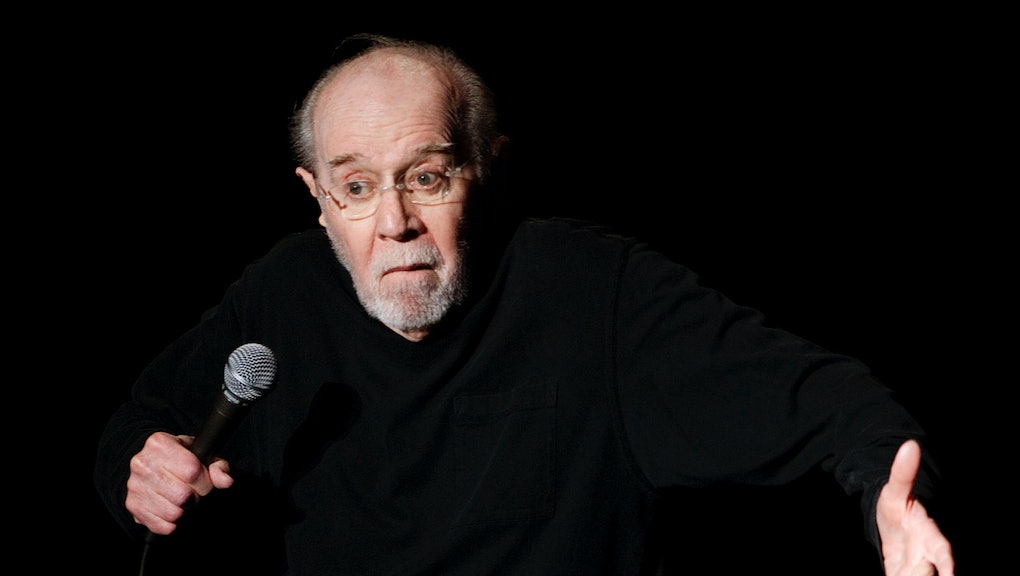 In his 1996 HBO special Back in Town, the late comic legend and social critic George Carlin nailed the hypocrisy of social conservatives who rail against abortion and birth control with "pro-life" rhetoric while simultaneously attacking social programs designed to support struggling families, supporting war and inciting violence against women.

"They're all in favor of the unborn," Carlin says in the clip. "They will do anything for the unborn. But once you're born, you're on your own. Pro-life conservatives are obsessed with the fetus from conception to nine months."

"After that, they don't want to know about you!"

Nearly 20 years after the comedy special aired, the humor holds up. So do the politics.

1. Pro-families — until those families need our money

Carlin paces the stage, hyping the audience with assertion that the same conservatives who use pro-family rhetoric object to programs like food aid, free school lunches and cash payments to the nation's many deeply impoverished families.

And fucked they remain: Budget proposals adopted earlier this year by the Republican-controlled House and Senate budget committees call for $3 trillion in federal spending cuts from 2016 through 2025. The progressive Center for Budgetary and Policy Priorities estimated that the each plan gets "more than two-thirds of its non-defense budget cuts from programs for people with low or modest incomes even though these programs constitute less than one-quarter of federal program costs."

Meanwhile, child poverty rates in the U.S. are already some of the highest in the developed world, and have been increasing since the mid-2000s, the Washington Post has reported.

"Conservatives don't get a shit about you until you reach military age," Carlin said. "Then they think you are just fine. Just what they've been looking for. Conservatives want live babies so they can raise them to be dead soldiers."

A 2002 Gallup poll showed members of the religious right were far more likely to support strikes on Saddam Hussein's regime than those with relaxed religious views. As of 2008, polls of evangelical Christian leaders demonstrated many supported continuing the war in Iraq.

So at least as far as the U.S.' most recent major war is concerned, Carlin's contention that social conservatives are fairly aggressive on foreign policy stands up to scrutiny.

3. Pro-life — until it comes to abortion providers

Carlin also hit anti-abortion activists for extremist violence and intimidation against providers that was common then and is increasingly common now.

"These people aren't pro-life, they're killing doctors!" Carlin says in the special. "What kind of pro-life is that? What, they'll do anything they can to save a fetus but if it grows up to be a doctor they might just have to kill it?"

People who harass or attack women's health care clinics or their staffers and patients aren't representative of the entire anti-abortion movement. But the wing of a movement that feels comfortable using force and threats to achieve their ends is inseparable from it.

As Mother Jones reports, the heated rhetoric among presidential candidates that grew out of July's Center of Medical Progress video controversy coincided with a surge in violence, threats and arson directed at Planned Parenthood clinics, culminating in a Nov. 27 massacre at a Colorado Springs, Colorado, location, resulting in three deaths.

He's painting with a broad brush. But even today, statistics back Carlin's claims.

A 2013 ABC News poll found just 23% of Republicans want more women elected to office, despite the U.S.' already scant female representation in elected positions. More recently, a 2015 survey concluded participants who agreed with sexist statements about women were much more likely to hold anti-abortion views — including both people with paternalistic views toward women and outright misogynists.

The comedian who confessed to having "absolutely no sympathy for human beings whatsoever" died in 2008, but given his quotability factor, his legacy will continue to thrive as long as a conservative party exists.