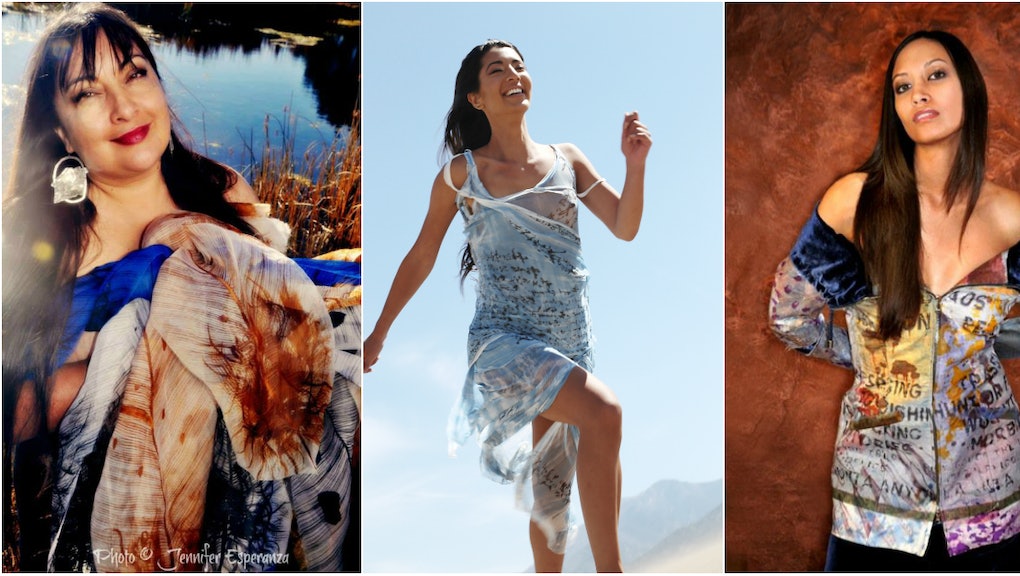 You don't have to search hard to find what looks like "Native American" fashion. But the truth is the indigenous communities that are "inspiring" Native clothes are rarely included in their creation, from design to manufacturing.

The result is a lot of clothing without acknowledgment — and wearers without understanding — of the history or meaning behind the designs. That often leads to Internet-wide cries of "cultural appropriation," a much-debated term that's come to dominate any discussion of current Native American clothing.

What we learned: The line between cultural appropriation and appreciation is often determined by a gut feeling — and that the debate is but one piece of Native fashion today. Here's what they want you to know.

1. Native design is not all buckskin, fringe, feathers and beads.

In November, the largest traveling exhibition dedicated to Native American fashion, Native Fashion Now, opened at the Peabody Essex Museum in Salem, Massachusetts. It includes the work of over 70 designers, spanning the range of what "Native" fashion can be.

There are shirts and gowns that rework traditional motifs like bulls or beadwork. There are knee-high boots covered in beads. There are dresses that look like they're molded from space-age cellophane. Then there are T-shirts screen-printed with "Native Americans discovered Columbus," by 26-year-old Jared Yazzi, a Navajo designer.

"Today, Native American design can be anything," Pat Pruitt, a designer with Laguna Pueblo and Chiracahua Apache ancestry, told Mic. As a metalsmith, Pruitt works exclusively with stainless steel and titanium, creating distinctive jewelry that only occasionally references his indigenous background. Most people think of a "romanticized" concept of Native fashion, he said, an umbrella his work doesn't really fall under.

In a similar vein, the Native American designer Patricia Michaels embraces her indigenous ancestry even though her designs skew modern, without many stereotypical Native American references. She incorporates her culture into her work in ways that lend symbolic special meaning, she said.

"I'm a designer who happens to be Native American and I can't shake the fact that when I make something, it has meaning behind it," Michaels, who is Taos Pueblos, told Mic.

2. In fact, there are over 560 Native American tribes and nations.

That meaning can vary greatly by designer. What is often categorized as Native American style or fashion is based on stereotypes or styles typical of nations in the Southwest, which have historically gotten more media exposure.

But there are plenty of Native designers not of those tribes; the term "Native American" applies to more than 560 tribes and nations in the United States. And like any other cultural groups, Native Americans' style and customs have evolved with every generation.

"Our communities are formed of people from tribal bloodlines," Elizabeth Perry, an Aquinnah Wampanoag designer and artist, told Mic via email. "We look different, have different languages and histories. Don't expect everyone to be the same, and don't expect all designers to be the same."

Yet Native American culture is often perceived as a "blanket ethnicity," Bethany Yellowtail, an Apsáalooke fashion designer, previously told Mic. Lost in that blanket ethnicity are the rich histories of communities that haven't historically had the opportunity to benefit on a large scale from their artistry and work.

3. There are plenty of Native American designers out there, even if you can't tell their clothes are "Native."

Social media has become an important promotional platform for Native designers, as have museums and larger non-Native companies that are helping raise their profiles. In September, Martha Stewart included three Native designers and boutiques as contestants in an online competition spotlighting handmade American products.

Those designers, who are gaining bigger audiences every day, are the ones best positioned to design with Native American inspiration in mind.

"Artistic motifs tend to be distinct in each region, and it is the Native designer, and not the outside world, that has the cultural knowledge and sensitivity to know how and where specific designs can be employed without eroding those cultural beliefs and values," Perry said.

"It is the Native designer... that has the cultural knowledge and sensitivity."

As a result, what counts as "sacred" varies from tribe to tribe — which can lead to an awful lot of confusion.

"The complexity is there's so many different tribes," Pruitt said. "You know, you're dealing with 500-plus nations that each one is distinctly different and each one has very distinct cultural items that are precious to them."

The war bonnet, often recreated and sold as a feathered headdress, is a sacred item in many Native communities. While war bonnets are not a part Pruitt's community, he said he still has respect for the tradition.

"I do know what it signifies, where it comes from," he told Mic. "So I choose to support my Native brothers, because that is theirs."

5. If you're tired of talking about cultural appropriation, so are they.

The conversation about Native American style or symbols being appropriated by non-Native cultures has heated up in recent years. When the cultural copying or inspiration misinterprets the symbolism or glosses over its origin, as many Native American-inspired items appear to do, it can sting, particularly for a community that's long been marginalized and had its sacred traditions misunderstood.

"I'd say appropriation, such as stealing designs, erasing the artist's name and tribal origin, are a continuation of the colonization process, as much as naming a car after a sacred ceremonial observance or trotting out a sports mascot are also part of the same intense degradation of Native American people that has gone on literally for hundreds of years," Perry said.

But that doesn't mean only Native Americans can be inspired by Native American culture. Designers repeatedly mentioned how they hope the conversation steers in another, more positive direction. They hope to focus on the current achievements of Native designers while empowering and encouraging people at all levels of the fashion industry to take it upon themselves to research the histories of their inspiration.

"[Cultural appropriation] is not broadly an unreasonable concept, I just think it's over-cooked," Jamie Okuma, a Native American fashion designer from the Luiseño and Shoshone-Bannock tribes, told Mic via email. "So much so that it leaves a bad taste in the mouth and you don't want another bite.  And that defeats any progress made."

Shoppers can do part of the work, though.

"There is opportunity that if you find something that, hey, you think might be Native, you can probably go search out artists that do stuff identical or very similar to that line of work and buy directly from them and have a very engaging experience," Pruitt said.

Designers repeatedly pointed to how easy it is to buy directly from Native American artists. It's one key difference between cultural appropriation and appreciation.