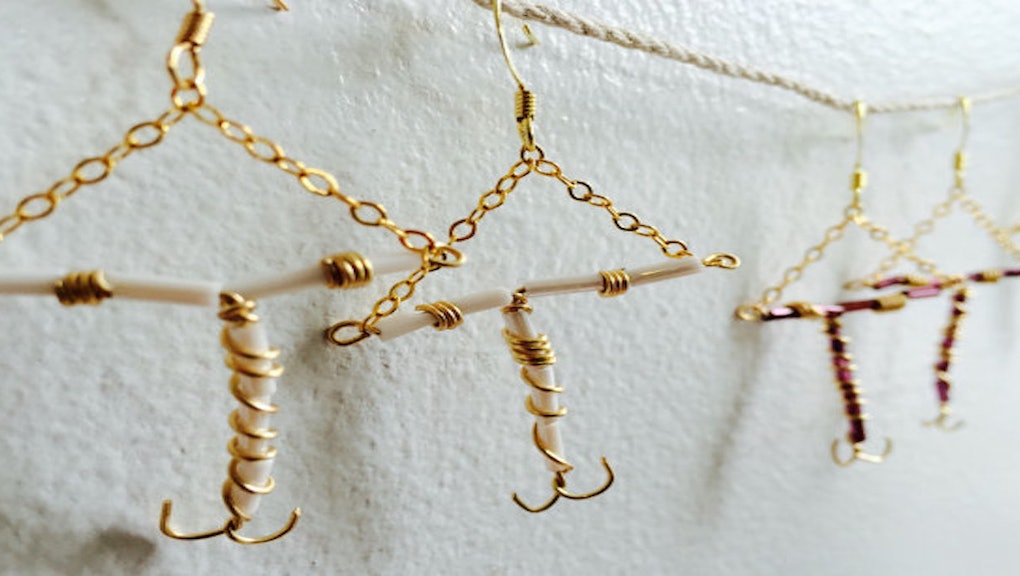 This Woman Is Selling IUD Earrings to Benefit Planned Parenthood

In the wake of the Colorado Planned Parenthood shootings that took place over Thanksgiving weekend, reproductive rights advocates have been rushing to express their support for the organization. One medical student and Etsy entrepreneur has come up with a particularly ingenious way for women to demonstrate their support for Planned Parenthood: by wearing it on their ears.

Natasha Miller, 26, is a medical student and longtime advocate for reproductive rights. From now until Dec. 20, she's selling IUD earrings on her Etsy store, ContraceptCreations, and giving $5 of every sale to Planned Parenthood as a show of support for the organization.

The earrings, which are made out of copper wire and beads, are being sold on Miller's Etsy store for $30 each.

"The IUD jewelry is about educating people about not just IUDs, but about women's health and the choices we have for birth control," Miller told Mic. "And that's very much what Planned Parenthood offers."

Miller has been making the IUD earrings since September 2014, when she was working as a women's health research associate at The Institute for Family Health in Manhattan. "I thought IUDs looked like jewelry, so I thought it'd be funny to make them for my boss, who's a big IUD advocate," she told the Daily Dot back in December 2014.

Since then, Miller estimates she's sold about 60 pairs of the delicate, copper-and-wire bauble. She's also donated a number of pairs to reproductive rights organizations, such as the Reproductive Health Access Project.

She's not the only jewelry artist to create IUD earrings to make a statement in favor of reproductive rights. Back in March, Colorado politicians donned IUD-shaped earrings and pins by Etsy jeweler Virginia Smith to protest against comments made by Colorado lawmaker Bob Beauprez who referred to IUDs as an "abortifacient."

IUDs, or intrauterine devices, are T-shaped devices that are inserted in the uterus to prevent pregnancy. While IUDs are costly (having one inserted can cost up to $1,000 without insurance), they are also long-lasting and effective: According to Planned Parenthood, less than 1 in 100 women will become pregnant after having an IUD inserted, giving them a failure rate of less than 1%.

The effectiveness of IUDs has made it one of the most increasingly popular reversible birth control devices on the market. Although it is still less commonly used than condoms or birth control pills, a report from the Centers for Disease Control estimates that 6.4% of women between the ages of 15 and 44 were using IUDs between 2011 and 2013, as opposed to a scant 1% of women in the mid-1990s.

Despite lingering stigmas surrounding IUDs — for instance, that they cause scarring or reduced fertility — gynecologists are increasingly recommending them to young women looking for a reversible form of contraception.

IUDs "are an especially good option for young women who want to delay starting their families for a few years, so they can be the best parents they can be," Deborah Nucatola, Planned Parenthood Federation of America's senior director of medical services, previously told Mic.

By donating part of the proceeds of her sales to Planned Parenthood, Miller wants to not only educate people about the benefits of IUDs, but also to draw attention to the other services offered by the organization, which provides an estimated 2.7 million men and women with reproductive health care information and options.

"Planned Parenthood is just associated with abortion, [but] I wanted to get the word out that it's also associated with birth control and other reproductive health issues," Miller told Mic.