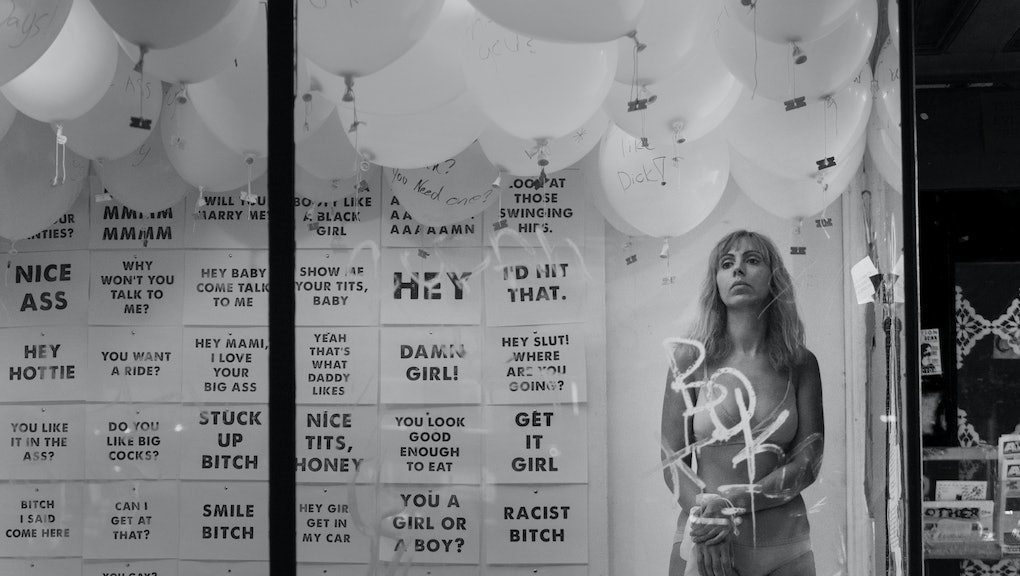 These are some of the phrases Mirabelle Jones heard as she posed inside a San Francisco display window last month, dressed in nothing but a nude bra and underwear while onlookers watched from the other side of the glass. For eight hours, as a recording of slurs blared from a speaker, the Los Angeles-based artist and activist stood or paced beneath a dozen or so white balloons, each of which carried a single floating razor blade. Behind her, the walls were lined with print-outs of more vile comments.

Like those on the recording, all were real-life catcalls.

Jones' performance, "To Skin A Catcaller," featured catcalling stories from women across the country. Jones collected the stories via an online survey, which received 100 responses within the first week. She then recorded herself reading the catcalls out loud and played the recording during her performance.

"Many of the responses cited physical violence, stalking behavior, verbal abuse and some even public assault," Jones told Mic. "Many [victims] were left with feelings of anger and helplessness. It is inexcusable to me how tone deaf society can be to taking an issue seriously which affects so many of us in a very visceral way, and which impacts our daily lives."

Jones, who works for the anti-harassment organization Hollaback, said she hopes to make a point about the often violent nature of street harassment and disprove the idea that catcalling is nothing more than a harmless wolf-whistle. She said she has been catcalled on a near-daily basis for years, sometimes up to 20 times a day. (She's not alone: According to one UK study, 90% of women have reported experiencing street harassment at some point since they hit puberty.)

"I was once followed to my car by a group of men who were angry when I didn't respond to their catcalling," she said. "They surrounded my car and would not let me leave. I was afraid they were going to break the windows or try to hurt me physically." The experience left Jones feeling trapped, a feeling she hoped to convey with the confined space of "To Skin A Catcaller."

Unfortunately, not everyone understood the purpose of the exhibition. Jones told Mic several viewers responded to the piece by catcalling her from outside the display case.

"There were a number of men who, enticed by my lack of clothing stood and stared at me," Jones said. "When they realized through the audio loop and visual cues that they were watching a performance about catcalling, many felt uncomfortable and took off. One man stood licking his lips at me for a full 10 minutes."

But Jones has received positive responses to the piece as well. "Many who passed by stopped and looked at me in a way in which I knew they related to the piece, that it affected them by legitimizing their experience," she said.

Although the project might have resonated with viewers, Jones knows there's still work to be done. She hopes that victims of street harassment will be able to come together in solidarity and share their experiences, but also that society will validate their stories as part of a larger cultural phenomenon.

"It's not a personal problem. It's a cultural problem. And we have a duty as a society to address it," Jones said. "Catcalling is an injustice that should not happen, period."