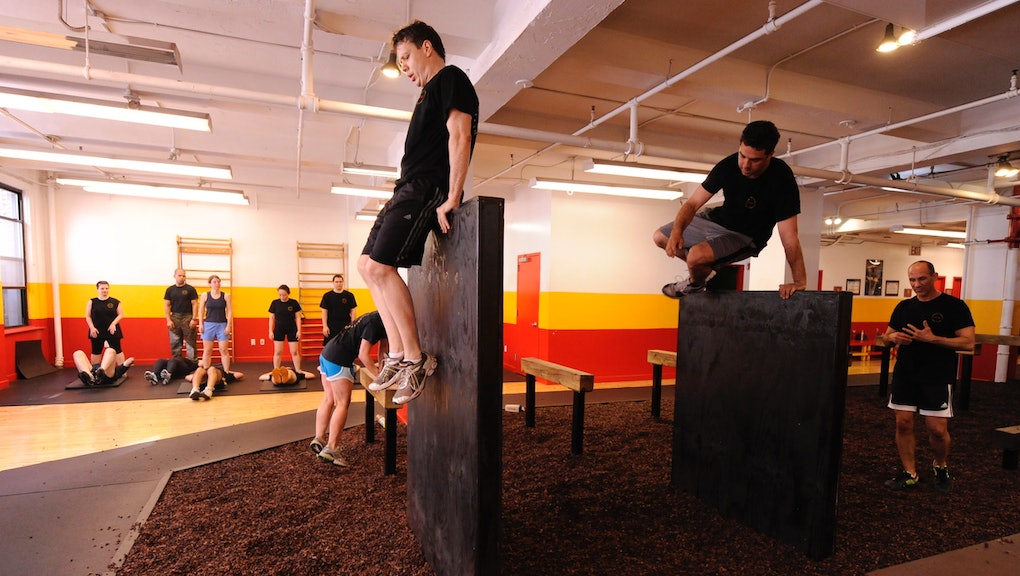 I Let U.S. Marines Scream at Me and Got the Best Workout of My Life

"Bear crawl! Get down and bear crawl!"

Our panting group dropped to the ground, our eyes now level with our instructors' military-style boots and camouflage pants, and maneuvered ourselves around the indoor track using only our hands and feet. Five minutes into the workout, I was already plagued with dread — and I hadn't even touched the monkey bars, hurdles or 6-foot walls yet.

This grueling workout to which I'd willingly subjected myself was Warrior Fitness Boot Camp, a boutique NYC fitness studio modeled after U.S. marines' training regimens. Think SoulCycle, but with drill sergeants and obstacle courses instead of spin instructors and stationary bikes.

The gym was founded in 2008 by two former marines, Alex Fell and Ruben Belliard. All of its instructors are former marines, too. Adding to its first location in midtown, Warrior Fitness recently opened a second location in Williamsburg due to popular demand.

"People have always been intrigued about the type of training we go through," Fell told me over the phone, the week after my workout. "A lot of people are interested in trying it, without having to go through the process of enlisting and serving four years."

Warrior Fitness Boot Camp incorporates two types of Marine Corps workouts. Certain portions, such as the obstacle course, mimic marines' regular, structured training routines. Other portions reflect what happens, as Fell put it, "when the platoon screws up — when somebody doesn't listen — they put you in what's called 'the pit,' and they make you do mountain climbers, jumping jacks, running, and they're yelling and screaming at you."

Much of the workout certainly felt like punishment. After the bear crawling came more squats, crunches, and push-ups than I've probably done collectively over the past year. Just like marines, we counted out the reps as a group.

Then there were stairs — so many stairs. Running up stairs, hopping up stairs, running down stairs and then being told to run up them again. Although they were painful, I was spurred along by encouragement from the rest of my team. We were bonding through mutual suffering! Practically dragging myself up the zillionth flight of stairs, I especially connected with another Warrior Fitness newbie who claimed, through ragged breaths, that she "mostly just did dance classes."

That's a perk you don't get from most other workouts, Fell later told me. "One of the biggest benefits is the bond and camaraderie you have within class," he said. "It forces you to push yourself harder."

Finally, it was time to tackle the obstacles. We started with a row of hurdles, progressively increasing in height. Under Belliard's tutelage, and with some cheering from my newfound dance-class pal, I found I could actually launch myself over all of them. Whoa — I felt strong.

I also learned how to climb over walls, just like in the movies. Pulling myself over a wall taller than my head proved not just physically rewarding, but a nice boost to my confidence.

But my biggest accomplishment was the monkey bars — a feature many first-timers struggle to complete, Fell said. These weren't your standard, playground-variety monkey bars; they were shaped like an inverted V — the first half slanted uphill, the second half downhill. There are monkey bars like this in the Marine Corps, too, Fell said, but they're four times as long.

When you're not a 50-pound 5-year-old, monkey bars are hard. Your body is heavy. Your hands can barely cling to the bar. With some side-to-side momentum, I managed to get myself moving.

The pain was bad. Blisters formed and ripped in the span of seconds. I pictured my fingers popping out of my hands at the knuckles. But Belliard, watching from the sidelines, yelled at me to push through the pain. I gritted my teeth and kept going.

Blisters formed and ripped in the span of seconds. I pictured my fingers popping out of my hands at the knuckles.

Belliard knew I could push myself harder. Finally, at long last, I released myself down onto the soft ground. I'd done it.

Warrior Fitness is not for the faint of heart — and probably not for someone who's never attempted a push-up before. But for those who can handle plenty of sweat and friendly shouting, it's a wonderfully rewarding workout — even if you might not be able to move for two or three days afterward.

As Fell said, the boot camp won't just make you perform better in the gym. It'll help you in life, too.

"Every day you're overcoming — literally and figuratively — a different obstacle in your life," he said. Once their clients go out into the real world, they can think back to that time they conquered inverted-V-shaped monkey bars. At that point they'll realize, as Fell put it, "That's a lot harder than this Excel spreadsheet I had to do."