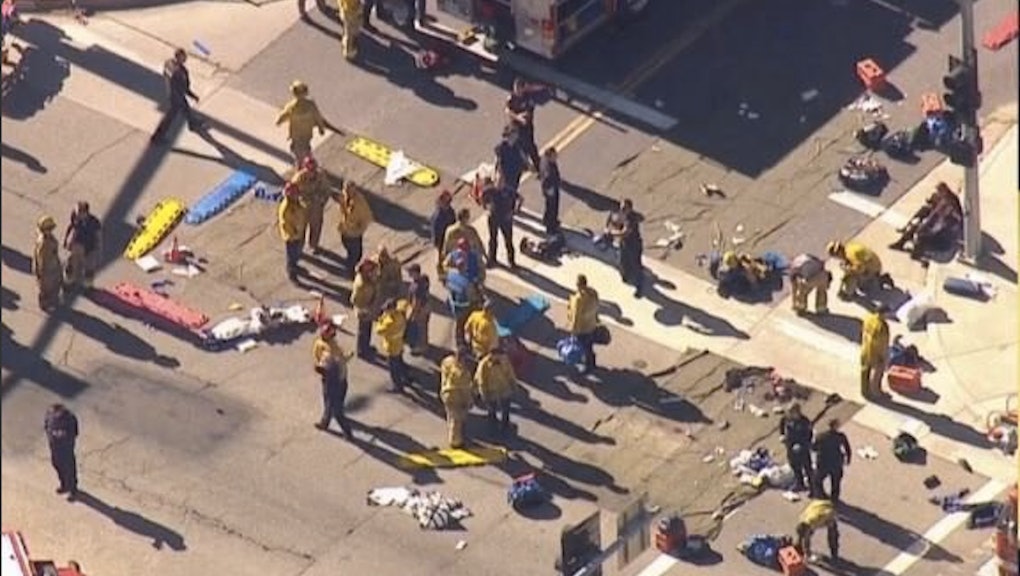 A shooting at the Inland Regional Center for social services in San Bernardino, California, left 14 dead and 21 wounded Wednesday, local authorities report, making this the 355th mass shooting in 2015.

"It's terrible, it's terrible," Kim Hanson, manager of Structural Materials Co., told Mic. "We're all on lockdown. They have armored trucks going up and down and they have about 200 cops. We've been on lockdown less than two hours. But there are a lot of injuries — I can see a lot of people being treated. It's terrible."

Democratic presidential candidate Hillary Clinton responded with a bold statement on Twitter, saying she refused to accept America's systematic cycle of gun violence because it is "not normal."

In her message, Clinton took the opportunity to take on gun violence, which would invariably include tighter firearms legislation. Gun control remains a hot-button and divisive issue in the presidential candidates' ring.

GOP presidential candidate Donald Trump notably avoided the issue of gun violence all together with his Tweet regarding the shooting, choosing instead to commend law enforcement for their work.

But it was Martin O'Malley, the other Democratic presidential candidate to be featured in major polls, who said it was "time to stand up to the" National Rifle Association, making him the only candidate so far to drop those three letters.

The NRA's lobbying influence has both stymied the attempts of politicians and civilians to introduce tighter gun control — an initiative reintroduced in the immediate aftermath of each mass shooting. The NRA's influence on Capitol Hill has left most candidates and politicians wary of taking on the organization.

"The National Rifle Association outspent supporters of new gun controls [expanding background checks] by hundreds of thousands of dollars as the Senate considered and ultimately rejected legislation," the Hill wrote in April 2013, not long after the Sandy Hook Elementary School shooting.

Given this year's record, the response of presidential candidates to mass shootings has essentially become a requisite part of the campaign process.

But that doesn't mean the world at large is moved by the mostly boiler-plate responses.

Dec. 3, 2015, 1:05 p.m.: This story has been updated to reflect the confirmed number of people injured in Wednesday's shooting in San Bernardino, California.