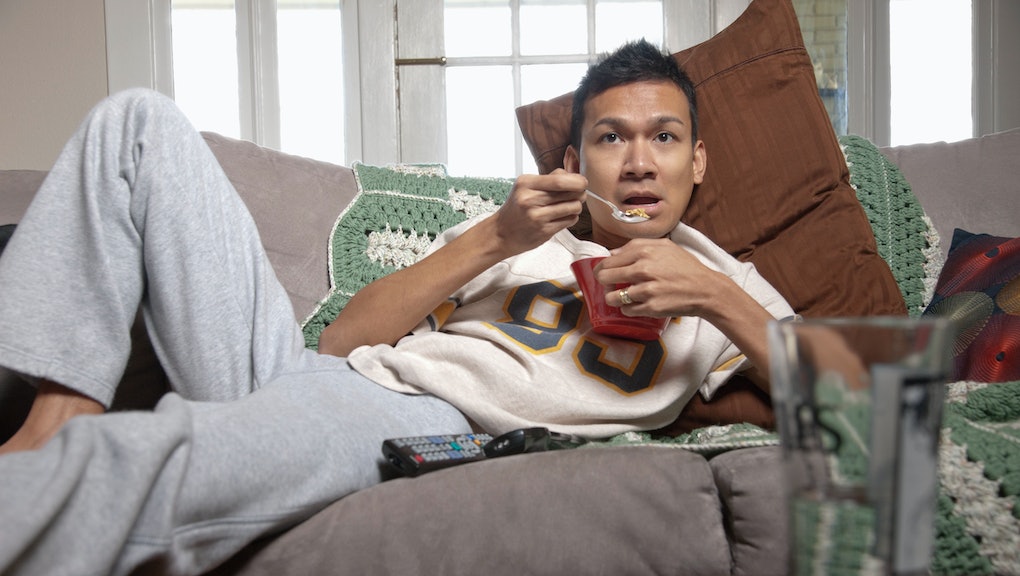 Addicted to Netflix Marathons? This Study Has Bad News for You

In the middle of that Master of None binge, did you start to worry if too much TV might actually be rotting your brain? As it turns out, that old scare tactic your parents used to use might actually have some validity.

A study by researchers at Northern California Institute for Research and Education has found a link between watching TV, a lack of exercise and declining brain function.

By analyzing 25 years' worth of data on 3,247 people aged 18 to 30, the researchers found that those who reported watching the most TV and doing the least physical activity tended to experience the greatest cognitive decline over the nearly three-decade time period. Cognitive decline was measured in a series of brain tests.

While prior research has shown a connection between TV, sedentary behavior and cognitive decline in old age, according to Time, this study shows (rather worryingly) that the decline could happen much earlier.

"High television viewing and low physical activity in early adulthood were associated with worse midlife executive function and processing speed," the researchers concluded. "This is one of the first studies to demonstrate that these risk behaviors may be critical targets for prevention of cognitive aging even before middle age."

Don't watch that much TV? Think you're safe? Think again. What counts as the "high television viewing" in subjects "more likely to have poor cognitive performance"? Anything above three hours a day. These days, three hours isn't an unusual amount of time to spend watching TV each day — in fact, it's pretty normal for most Americans.

According to a report from the U.S. Bureau of Labor Statistics, watching TV was Americans' most popular leisure activity in 2014. "Watching TV was the leisure activity that occupied the most time (2.8 hours per day)," the report found, "accounting for more than half of leisure time, on average, for those age 15 and over."

The study also found that low physical activity contributed to more quickly declining brain function — less than two and a half hours a week, according to Time.

Most Americans don't do a great job at meeting that benchmark, either. Though the CDC recommends we get two-and-a-half hours of moderate-intensity aerobic exercise per week, plus two days of muscle-strengthening activities, the agency found that only 20.8% of Americans aged 18 and older are actually meeting those guidelines.