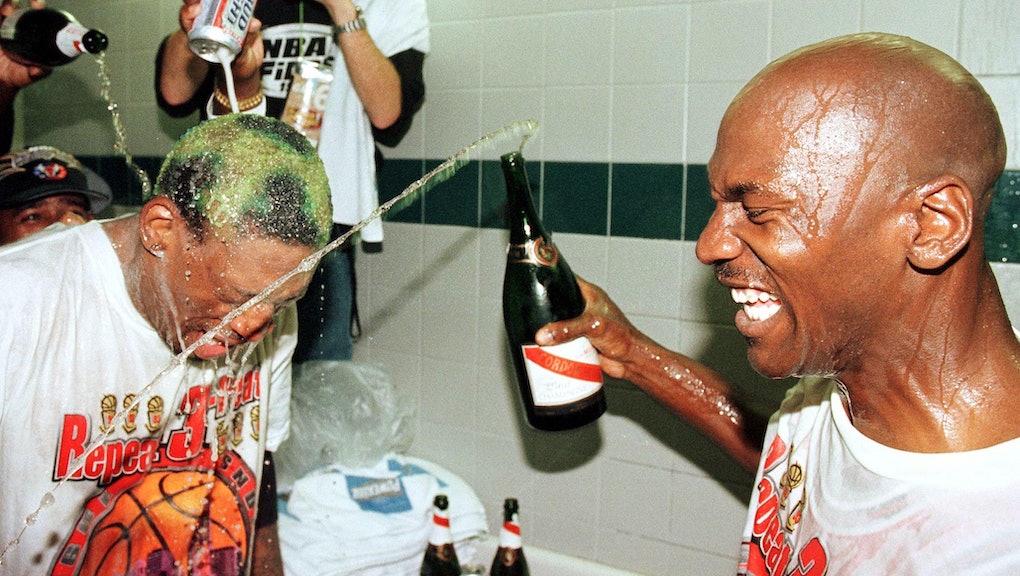 Here's Why Drinking and Exercise Go So Well Together

Congratulations on your victory! It's time for a drink.

A new study, performed by a team at the University of Houston and published in Front Psychiatry, examined the correlation between exercise and alcohol. It found that for many people (and animals), working out and beer go together like baseball and Cracker Jack. When we feel the rush of a hard workout, or the thrill of winning a game, we often opt to chase that feeling with something alcoholic — as the Chicago Bulls did after their 1998 NBA championship.

The University of Houston team found that both exercise and alcohol triggered reward-processing signals in lab rats' brains. Their rodent subjects kept seeking out the combination of booze and activity, rather than one or the other, because the reward signals were higher.

Humans and lab rats are, of course, different creatures. Dr. J. Leigh Leasure, leader of the Houston team, said that while the rodents combined ethanol and exercise strictly for its reward-center boost, human social bonding over a post-game beer at a bar plays an "outsize role" in human activity. Plus, hanging out with people after exercising could be a major part of why people stick with some form of workout in the first place.

A 2014 study from Pennsylvania State University took a group of 150 men and women aged 18 to 75 and had them use a smartphone app to record their daily drinking and exercise for 21 days in a row, three times over the course of a year. Regardless of gender, age or season, there was an undeniable connection between exercise and drinking, especially if the subjects went hard at the gym or kicked ass on the soccer pitch that day.

This connection did not suggest that exercise intensifies drinking habits that indicate alcoholism: Only on rare occasion did study subjects drink more than four drinks. But it meant the drinkers in the study were probably more likely to exercise beforehand — and were twice as likely to exercise regularly than the booze abstainers.

So good news, sports fans: Your post-hockey pilsner is just what the doctor ordered.

This article was originally published on Dec. 3, 2015