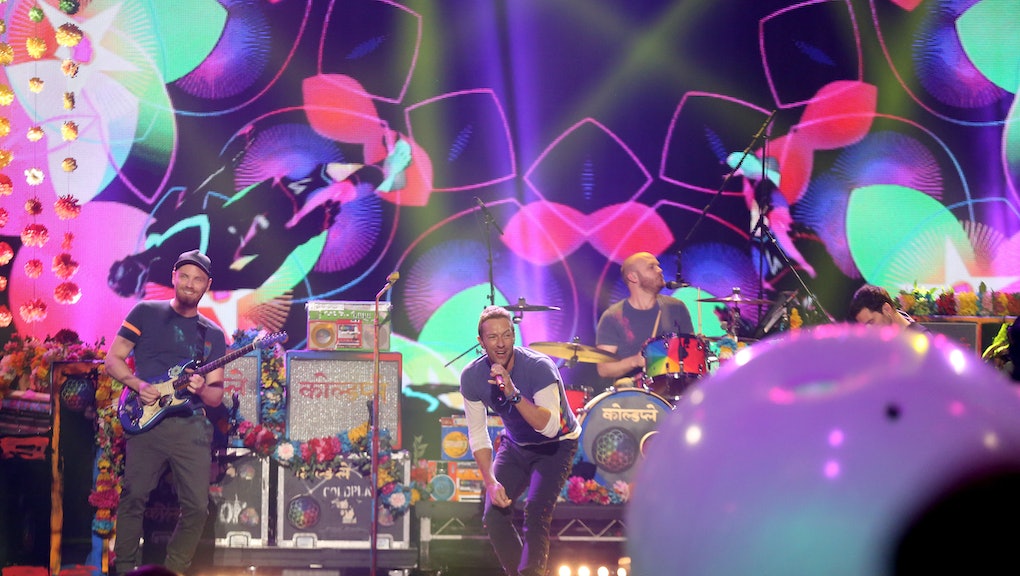 Coldplay 2016 Tour Dates and How to Get Tickets

Seasoned British rock band Coldplay is hitting the road this spring with scheduled tour dates across Latin America and Europe, and tickets for the numerous concerts in Europe are already up for public consumption. For Coldplay fans in the southern hemisphere, concert ticket sales begin on Friday and tickets for shows in a number of Latin American countries will become available for purchase over the next week.

"We're excited to announce the Latin American and European legs of next year's A Head Full Of Dreams Tour, with 20 stadium shows confirmed across 14 countries in Europe and Latin America," reads a statement from the band.

When and where to get Coldplay tickets: Concert tickets for April dates in Chile, Peru, Brazil, Colombia and Mexico go on sale this week, and prospective ticket buyers can head directly to the bands tour page to purchase tickets. On May 24, the band will cross the pond to play in Nice, France, and will continue a European tour until July 6. Tickets for Coldplay's European dates are already on sale, also via the band's dedicated tour page.

A new album on the horizon: On Nov. 6, Coldplay shared the good word with fans that a seventh album was slated for global release this Friday. The album, which is titled A Head Full Of Dreams, comes via Parlophone Records and is already available for pre-order via iTunes, Amazon and Google Play.

Norwegian producing and songwriting duo Stargate and longtime Coldplay collaborator Rik Simpson produced the record, which was recorded in Malibu, Los Angeles and London, according to the band. The record features an all-star crew of contributors, not least among them Beyoncé. Musical acts Noel Gallagher, Tove Lo and Merry Clayton also make appearances on some some of the 11 tracks that grace Coldplay's latest — plus a 12th "hidden track" titled "X Marks the Spot," the album's closer.

To date, the band has released one single from A Head Full of Dreams, the synth and reverb-laden track "Adventure of a Lifetime." The cut is available for streaming via Spotify:

"Revitalized, they've made an album that's bursting with energy, color and big, life-affirming moments such as the deliciously ebullient first single 'Adventure of a Lifetime' and the rocket-powered 'Hymn for theWeekend,'" reads a press release. "Coldplay have never enjoyed making a record more than this one. Nor have they been happier with the results.

"And, this time, they plan to take it around the world."

5. "Adventure of a Lifetime"