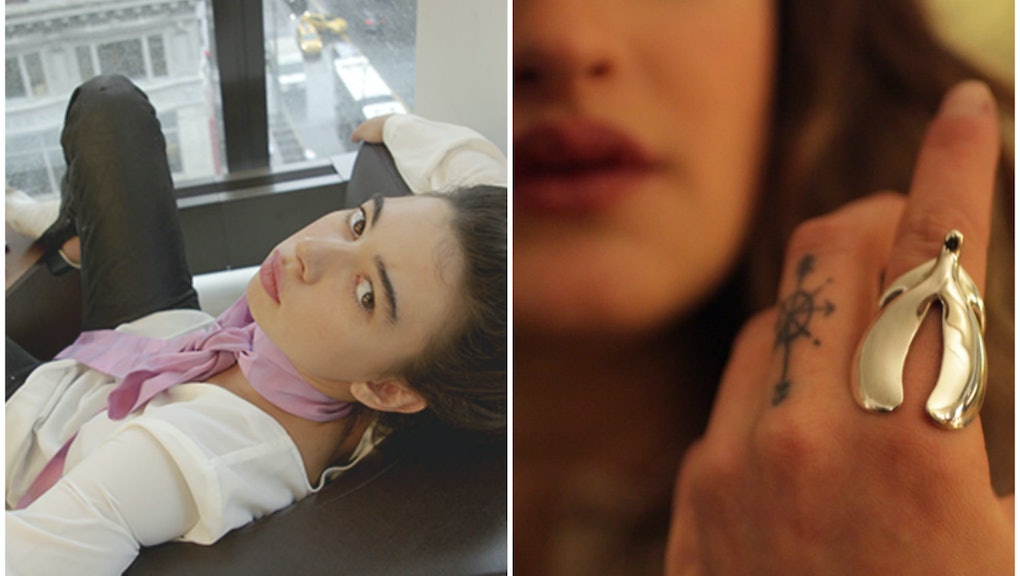 This 'Pussy Scarf' Caps Off the Biggest Fashion Trend of 2015: Vaginas

A scarf known as Pussy Bow is making waves. Can you tell why? Does the modern-looking mixture of pinks, blues and light purples remind you of anything? (Other than the latest Pantone Colors of the Year, of course.)

Does the name tip you off?

Unearthed by the Daily Dot on Thursday, the Pussy Bow was designed by feminist artist Christen Clifford, and the blend of pinks are actually images of her vagina, taken after she live-streamed the inside of her vagina for an audience (really).

Clifford was inspired to create the scarf after the images of her cervix from the live-stream surprised her so much. "I thought the colors would be a deeper red," she told the Daily Dot. "The pinks and purples and even blues that resulted were a surprise. The light on the camera highlighted my vaginal mucus to that lavender blue."

"I want to fight the patriarchy with art," she said. For Clifford, who has also conducted a discussion while showing guests the interior of her vagina with a speculum, the scarf is just a continuation of work that tackles topics such as rape, childbirth and menstruation.

Vaginas en vogue: It's not the first time this year vaginas and fashion have collided. The "trend," if we can call it that, stems from a broader narrative happening about de-stigmatizing and celebrating women's bodies, from talking openly about periods to freeing the nipple.

Talking about vaginas — saying the word, celebrating their natural looks — is a piece of that conversation, and fashion has embraced it. Clothes are finally acknowledging them. A major fashion show hosted a vagina-centric monologue. Oh, and we've got wearable items that literally showcase vulvas, clitorises and other vagina-themed elements in all their glory on rings and purses and dresses, oh my!

For real, you can even buy a purse with a smoking vulva on it nowadays. Behold, the most memorable fashion trend of 2015.

Let's start with a vagina accessory Gloria Steinem has even come to love: the clit ring. As Broadly reported, the most popular version is produced by a company named Penelopijones, which is — surprisingly — founded and owned by a guy named Orien Mcneill.

After seeing a 3D sonogram of a stimulated clitoris his girlfriend showed him last year, Mcneill started hand-crafting silver and gold into shapes that resembled the clitoris. And ever since Steinem was spotted with the ring this spring, sales for the "clitorings," which are priced between $122 and $575, have boomed. As Mcneill sees it, he's helping spread awareness of what a clitoris actually is and how it works. And as Mic has reported before, that's a very important thing to know.

"I think people talking about it and wearing it will spread awareness of the idea that the clitoris is this very interesting and mysterious anatomical object," he told Broadly. Apparently Steinem thought so too.

The front of these bags by designer Rachel Feinberg are, perhaps obviously, an artistic ode to the vulva. If you look a little closer, a tiny bead up top represents the clitoris.

Dubbed Pussy Pouches on her online store, Feinberg told Mic in September that she created them in response to manspreading on the subway and the gender politics behind taking up public space. In the name, Feinberg wanted to remove all the shame associated with words like "vagina" or "pussy."

"I wanted to remove the stigma and proudly display these designs," Feinberg told Mic previously. "Even with the name, I wanted people to be forced to say it, to stop being afraid of discussing this part of womanhood."

Retailing for $160 for a wallet or $825 for a vulva-adorned briefcase, the line's signature pink clutch has been worn by people like Beyoncé, transgender model Andreja Pejic and, most perfectly, two founding members of Pussy Riot, Nadezhda Tolokonnikova and Maria Alyokhina.

Leave it to Lena Dunham to make the most abstract vagina nail art imaginable. On her recently launched e-commerce site Lenny Store, which is affiliated with the Girls writer's media company Lenny, Dunham decided to start selling nail art. Of course since this is Dunham we're talking about, she went the extra mile and partnered up with Rad Nails to create nail wraps adorned with itty bitty breasts, butts and vulvas.

"Abstract enough to be safe for work, but cool enough to make a statement," the site says. Called "Nude" nail wraps, a set of 20 decals retail for a reasonable $12.

OK, so this Etsy shop has been around for a few years, but one of the latest designs is this adorable chain-smoking vagina. Crafted in Amsterdam, each of the vegan leather, envelope-style "vulvettes" from the Etsy store Ampule are all adorned with cutesy vinyl vulvas. Some look more like upside-down hearts with a tiny red rose in the place of the clitoris or a spade while others have some serious personality.

"I was thinking Berlin, 1930s," writes the store's founder. "This Vulvette is for the stylish ones, the obstinate ones, but also most certainly for the boys who are girls, the girls who are boys, the ones that don't wish to be defined, the queer ones... well, everyone it appeals to!!"

And if purses don't strike your fancy, Ampule's also got Moleskine notebook covers and smartphone sleeves. We want precisely 20.

Lili Murphy-Johnson wanted to celebrate what many vaginas do once a month. So this year, the London-based artist debuted a collection of jewelry honoring menstruation, from bejeweled menstrual pad rings to underwear embroidered with deep red bejeweled stains. Part of the art project's intention was to remove the stigma from discussing periods.

"Periods should be a normal thing to talk about, but so often we feel embarrassed," Murphy-Johnson told Broadly. "I wanted my collection to take on the quality of jewelry that I like, but using the qualities of that jewelry to show people that periods can be beautiful. People don't usually think they can be."

On the subject of lack of periods, Natasha Miller, a medical student at Loyola University Chicago who runs the Etsy store ContraceptCreations, has been crafting jewelry out of beads and copper wire to resemble IUDs. As Mic reported, Miller wanted to raise awareness of IUDs as well as respond to the attacks on Planned Parenthood, with $5 from every sale going to the women's health organization.

"The IUD jewelry is about educating people about not just IUDs, but about women's health and the choices we have for birth control," Miller told Mic previously. "And that's very much what Planned Parenthood offers."

Clearly, vaginas ruled this year. They always rule, of course, but this year, they started getting the appreciation they deserve in wearable form. We can only begin to imagine what 2016 has in store.