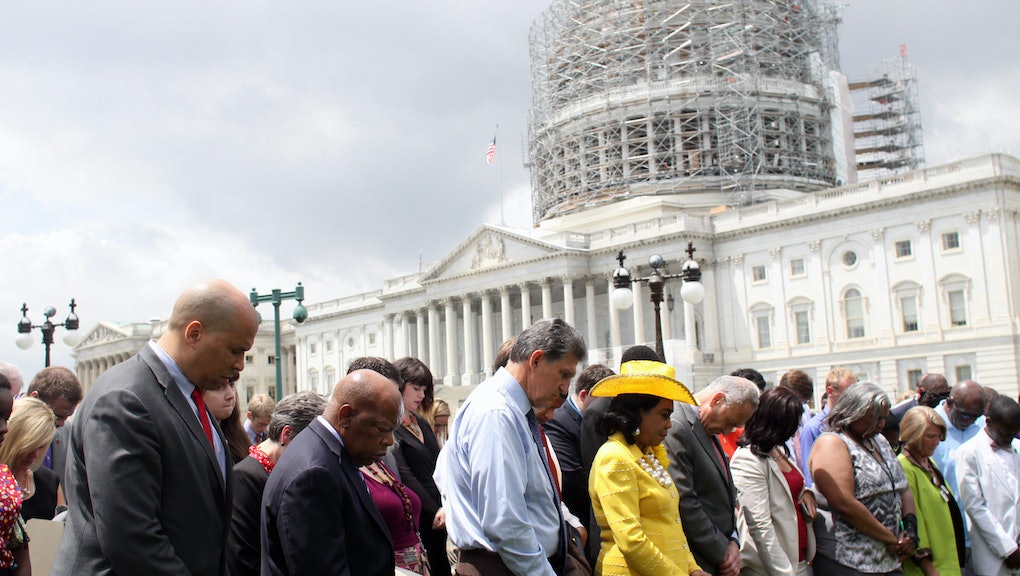 Within minutes of reports that a social services center in San Bernardino, California, had been the target of the nation's 355th mass shooting of 2015, the Twitter feeds and Facebook timelines of senators and representatives flooded with expressions of condolences. Elected officials offered thoughts, prayers or both to the shooters' victims and their families, while a few expressed anger at a national gun culture that has, time and again, appeared to place the rights of firearm enthusiasts over those of churchgoers, college students and first-graders.

But as the sympathies trickled, a theme developed. Politicians who had previously called for reforming the nation's gun laws saw the shooting as yet another fatal example of the deadly cost of liberal access to firearms, while those whose political viability depends on the continued goodwill of the gun lobby offered "thoughts and prayers" in lieu of policy solutions to the problem of mass shootings, which have resulted in the deaths of 447 people this year.

ThinkProgress contributing editor Igor Volsky noticed two common threads among many of the elected officials who were the quickest to tweet that their "thoughts and prayers" were with the victims of the San Bernardino shooting: long histories of opposition to gun-control laws, and hefty campaign checks from the National Rifle Association. On Wednesday evening, Volsky went on a lengthy tweetstorm documenting just how much money these politicians received from the NRA in 2014:

Using publicly available campaign donation data, Volsky pointed out the contradiction of those offering blessings and comfort to victims of gun crimes while accepting checks from the NRA, which has successfully defeated measures that would implement background checks for those seeking to purchase a firearms, limits on magazine size and research into the number of firearm deaths in the United States.

A larger view: Expanding on Volsky's theme, Mic combed through tweets, posts and press releases written by every member of Congress who received campaign contributions from the NRA during the 2014 midterm election cycle. The results: The NRA donated a total of $152,950 in campaign contributions to 51 senators and representatives up for election in 2014 who shared their "thoughts and prayers" with the victims of the San Bernardino shooting this week. All 51 of the politicians are Republicans.

This doesn't even include outside spending — that is, political expenditures made independently of candidates' committees. Twelve of the 51 Republicans who received direct campaign contributions from the NRA and tweeted their sympathies for the shooting victims were also the beneficiaries of outside spending by the group last year. In 2014, the NRA spent $10.8 million in independent expenditures to support Republican candidates, according to Open Secrets. The amount spent on behalf of candidates who tweeted or posted "thoughts and prayers" in the aftermath of the San Bernardino shooting totaled $927,865, bringing the price for congressional thoughts and prayers in the aftermath of the nation's latest mass shooting up to $1,080,815.

For example, Sen. Majority Leader Mitch McConnell (R-KY) received $9,900 in direct campaign contributions from the NRA for his 2014 re-election bid — a number that doesn't include the $671,559 the organization shelled out in indirect spending to support McConnell in one of its most expensive races of the cycle.

Rep. Bob Goodlatte (R-Va.) was also a recipient of $9,900 in direct donations from the NRA.

Rep. Darrell Issa (R-Calif.), the richest member of Congress, received $2,500 in direct campaign contributions from the NRA and is a frequent guest at the lobbying group's leadership forums.

Of the 51 congressional Republicans who expressed sympathy for the victims of the San Bernardino shooting after benefiting from the NRA's largesse, none paired their tweets, posts or releases with a push for a public policy solution to gun violence, whether it be background checks or increased armed security at social service centers, movie theaters, churches, schools and other public places. Rep. John Shimkus (R-IL), who received $2,000 in direct campaign contributions from the NRA in 2014, did, however, find a Bible verse that cautions the uselessness of trusting in mankind to solve its problems.

He may be right. The outcry following the deaths of 14 people at a social services center in San Bernardino is the same outcry that has followed every other mass shooting in recent memory. If legislative action and political will failed to materialize after Charleston, after Roseburg, after Virginia Tech, after Sandy Hook, after Aurora, after Tucson, after Fort Hood, perhaps prayer is all that we have left.

In the meantime, the rate of mass shootings has doubled since 2000, 89 Americans are killed in shootings across the United States every day and Americans are more likely to be killed by a firearm than are citizens of any other developed nation.

Luke Brinker contributed to this report.