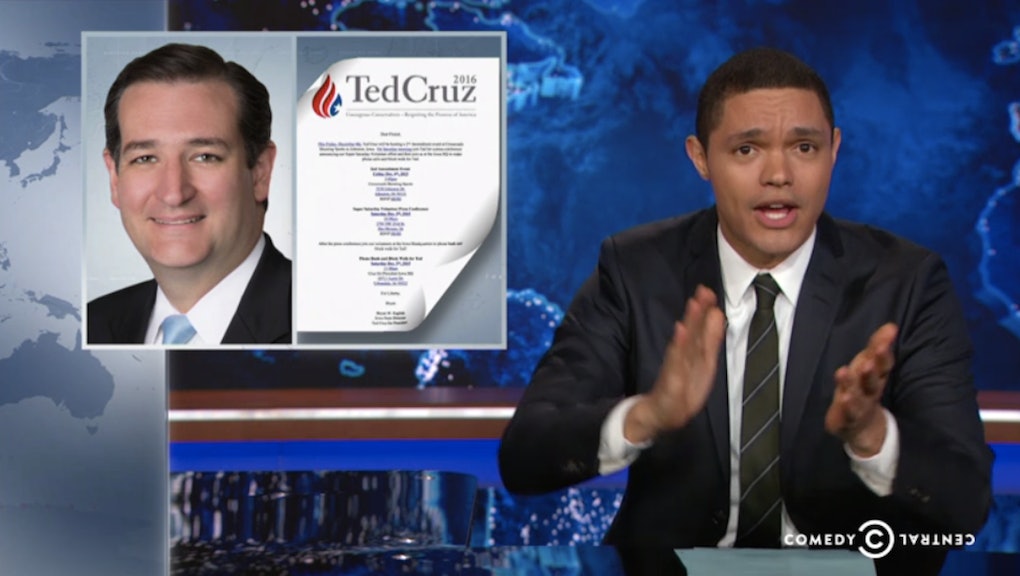 Just hours after San Bernardino shooting, while details were still unfolding, Texas Sen. Ted Cruz decided it was high time to invite some of his supporters to a gun rally.

"You've got to feel for him," the host said of the president. "But at least we've found the answer to the amount of pressure under which black does crack. But the good news is, if Obama wants to reverse that skin damage, he should take beauty advice from the people in charge of legislating change. Like, for instance, Senate Majority Leader Mitch McConnell."

"At least we've found the answer to the amount of pressure under which black does crack."

The non-stress of inaction on gun control, Noah said, has allowed McConnell the immortal ability to barely aged at all over the past six years. "Yeah, Congress has discovered the Fountain of Youth! Pure, distilled 'Inaction' applied liberally to the face... and then stick your face up your own ass for six years."

But not everyone on Capitol Hill has been quite as inactive as Mitch McConnell, Noah explains. In fact, some politicians have been a little too active on the matter. One such politician is Ted Cruz, who — just hours after the shooting — invited supporters to a Second Amendment rally at a shooting range in Iowa.

"Yeah... fourteen people just lost their lives in a shooting and Ted Cruz's first thought is, 'That reminds me — gotta send out my invites to my gun party.' That seems like something you'd only do if you were an asshole."

The United States far outranks all other developed countries with gun ownership and the amount of gun-related deaths — in fact, according to some estimates, there are more guns than people in America

The National Rifle Association is well-reputed for its lobbying money, which has tremendous influence over the U.S. government and its politicians. (See also: Journalist Igor Volsky's epic Twitter campaign from Thursday, calling out each politician who has accepted money from the NRA, and subsequently voted against the latest gun control measures.)

Perhaps not coincidentally, no real legislation has been passed to tighten gun control, despite the disturbing pattern of mass shootings.

And every single GOP presidential candidate only offered "thoughts" and/or "prayers" following the San Bernardino shootings, instead of suggesting any action be taken to prevent further bloodshed.

As Noah suggests, politicians can't wait for bodies to go cold before legislating for more guns.