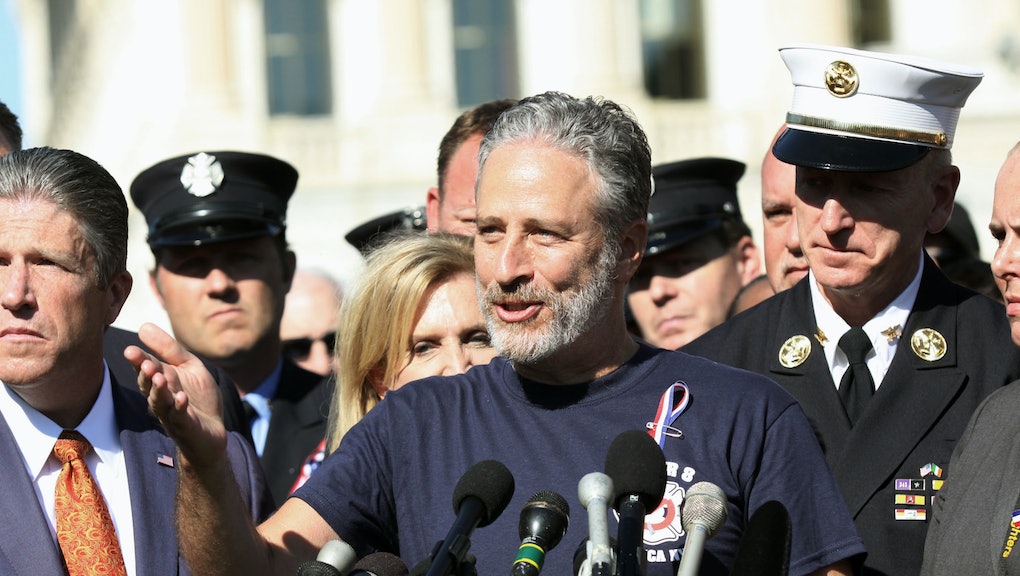 Former Daily Show host Jon Stewart exploded out of retirement on Thursday to deliver a stinging rebuke to Senate Republicans who he blamed for Congress' failure to reauthorize the James Zadroga 9/11 Health and Compensation Reauthorization Act.

The act provided federally funded healthcare benefits to 9/11 first responders who suffered from ailments caused by exposure to ground zero debris. Despite the efforts of Stewart and a bipartisan group of backers, the act was allowed to expire in September and, without further intervention, will run out of money sometime next year.

"I cannot bring heroism or integrity to this process," Stewart said during a press conference in Washington D.C. He was in the capital to take up the cause of the bill, which was dropped at the last minute from a recent highway bill. "I can only bring cameras, and hopefully a sense of public shame," he said.

The bill first became law in 2011 and was named after New York Police Department officer James Zadroga who died of complications from a 9/11-related respiratory illness in 2006.

Stewart personally called out Senate Majority Leader Mitch McConnell who he said was behind the stonewalling of the act's renewal. The comedian cited the Republican's previous support for a 2000 bill which granted free healthcare benefits to former employees of a nuclear power plant in Paducah, Kentucky, who were exposed to high levels of radiation in the 1950s and 1960s — McConnell even boasted about it in a 2014 campaign commercial. Stewart added that the cost of reauthorizing Zadroga would be $4.6 billion, less than half of what McConnell has funneled to his own state to pay for his program.

"How in good conscience can you deny them the very thing that you have proudly brought to the people of your state?" Stewart asked the crowd, the Daily News reported. "Please, personally ask [McConnell] that." According to the paper, the Senator declined on Tuesday to comment about his roll in stopping Zadroga, but an aid said he was not the one behind it.

It's not the first time Stewart has gone on a limb for the 9/11 bill. In 2010, amid the growing possibility the law would die under a Republican Senate filibuster, Stewart launched an impassioned campaign on the Daily Show to name and shame anyone who stood in its way. Stepping away from comedy, he even included a full segment interview with various first responders suffering conditions stemming from their 9/11 service. The bill was passed with many crediting Stewart's advocacy as the deciding factor.

On Wednesday, 9/11 responder advocates met with McConnell who has reportedly promised that he would include Zadroga in an omnibus budget bill, if the money could be found to pay for it.

Now, without a nightly national platform, it remains to be seen whether Stewart's calls will again carry the potency they did in 2010.