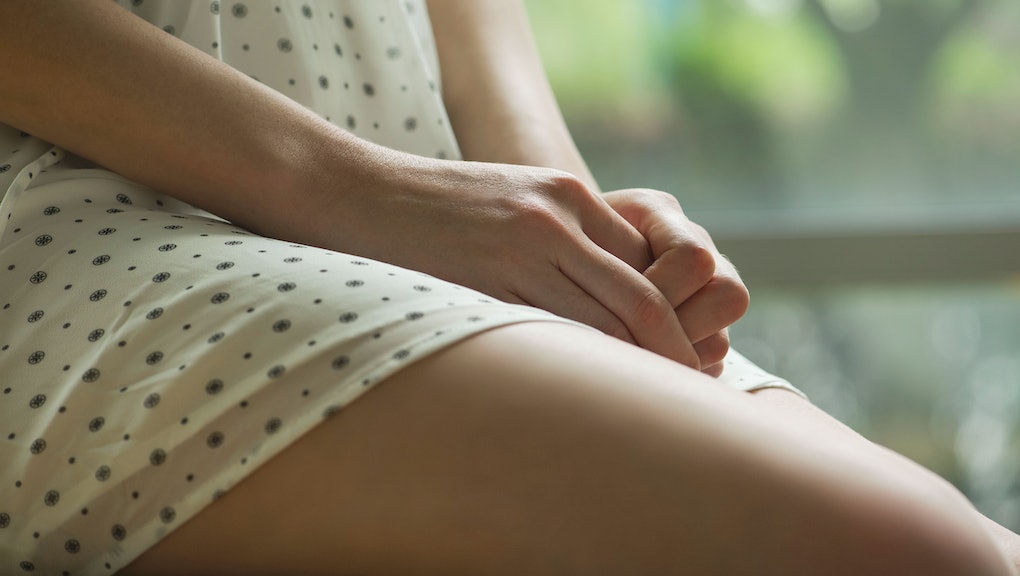 Meet the Women With Tokophobia, An Inexplicable, Crippling Fear of Pregnancy

When Jeena Chacko, 29, first heard about how babies were born — the swollen belly, the nine-month wait, the painful labor — she was filled with fear. She was only 8 years old, but she knew instantly: Having kids was not for her.

"I couldn't rationalize [my fear] because in the society I grew up in, women were expected to be married and giving birth," Chacko, originally from India, told Mic. "I mean, motherhood was considered as a default, not an option."

By age 17, Chacko read everything she could about pregnancy and childbirth. She was trying to come to terms with the reality of childbirth any way she could, but all it did was exacerbate her fears. "All I could feel was a creeping horror," she explained.

With more and more women postponing childbirth or remaining child-free, tokophobic women are becoming increasingly vocal. So, Mic asked tokophobic women about their everyday anxieties, navigating being childless in a high-pressure society, and how it feels to live in a world where a YouTube homebirth video is just a click away.

What kind of woman is afraid of pregnancy?: "It's no good saying to a woman that children have been born through the vagina for thousands of years — they know that," midwife counsellor Zara Chamberlain explained at the Royal College of Midwives conference in 2012. "These are intelligent women but it is a phobia, it's a fear and they can't avoid it."

Primary tokophobia frequently develops in adolescence, putting many women off the idea of pregnancy for the rest of their lives. The feeling of dread is always present when thinking about pregnancy, whether or not the woman in question actually wants kids. Secondary tokophobia, on the other hand, affects women who already have children and fear the complications and pain associated with pregnancy and childbirth. Both phobias are incredibly common for women, affecting up to one in 10 women, estimates say.

According to studies, women who have never given birth might develop tokophobia for a number of reasons. But most reasons are cultural: their mom passed down negative feelings about birth, they experienced sexual trauma in the past, or maybe they watched a graphic movie about birth at too young of an age.

"[It started when I was] watching a fairly graphic frontier birth scene on Doctor Quinn, Medicine Woman with my great-grandma," one woman on Reddit said. "I was no more than 7 at the time and I recall seeing the blood and hearing the woman scream. I turned around with a horror-stricken face and asked my great-grandma, 'Does having a baby really hurt that much?'"

"Does having a baby really hurt that much?"

Sarah*, 28, has been in a relationship for the last two-and-a-half years, and has no plans to have kids. She traces her tokophobia back to a fear of hospitals: At age two, she had an accident that required facial reconstructive surgery. Sarah also watched her mother suffer through post-natal depression after giving birth to her sister. As a result, she has long associated childbirth with "pain, loss of control and dignity, hospitals and death," she told Mic.

Other women say that their maternal instinct never kicked in — just fear.

"I was in my mid-20s when it occurred to me that the idea [of having kids] really has not grown on me at all," Jessie*, 28, who is disgusted by pregnancy, told Mic. "The thought of being unfamiliar with my own body if it's inhabited by a growing fetus gives me a lot of anxiety. A parasite growing in my body. Seriously. It just feeds from you, takes up space, sits on your bladder. Just get out."

Women with tokophobia may go on to eventually have kids, but some may go to the extremes of terminating a pregnancy or scheduling a cesarean in order to avoid further pain and anxiety.  That was the case for one woman, who earlier this year wrote to the Guardian that her anxiety spun out of control during her pregnancy. She contemplated an abortion, requiring anti-depressants, therapy and eventually a C-section. "I couldn't bear anyone touching my bump, so [my husband] didn't get to feel our baby kick. The idea of pregnancy still horrifies me," she wrote.

A day in the life of pregnancy fear: Modern life is filled with easy reminders of pregnancy and birth for those fixated on their anxieties.

"Watching movies and TV shows where a woman is giving birth, or images/films showing pregnant bellies make me want to turn the channel," one woman on Reddit explained. "Being around obviously pregnant women also makes me uneasy. [...] The thought of a thing growing and living inside her and the idea of the same thing happening to me, morphing and scarring my body, deeply disturbs me."

Chacko has a list of reasons she rattles off when asked what's so frightening about pregnancy: the pain of an episiotomy, crowning, cesarean births, spinal injections. She's also horrified by what she calls a "trick of evolution": "The overwhelming 'love' that a mother feels seeing her newborn baby, which makes her forget the pain [of birth], is in fact the release of oxytocin and endorphins that induces feeling of affections and happiness," she said.

Jessie said the feeling she has when imagining herself pregnant is like "when I'm stuck in a crowd about to have a panic attack but at least I can get away from the crowd. I can't get out of my own body and the extra person in it isn't giving me my space."

"I do have nightmares once in a while about being pregnant," Alex Wege, 33, said, admitting that if she were to become pregnant now, she would consider abortion. "Sometimes I wish the decision would be taken out of my hand by nature. Like, at some point my doctor telling me, 'Sorry, premature menopause.'"

The internet of anxiety: The fear is worse among women who have never had kids, whose imaginations, social media stalking and Google detective work can exacerbate their fears of unknown labor.

"Just today my [pregnant] friend posted (on Facebook, of course) that she almost vomits every time she hiccups. Too much for me," one 29-year-old woman on Reddit who identifies as tokophobic said.

"If I see anything that signifies baby, pregnancy or childbirth – it can set my mind racing. I silently freak out inside," Sarah said. "Usually when I'm back at home after a long day in the office and I have access to a multitude of information at my fingertips, Google, like an old friend, is always there to quench my thirst for greater knowledge."

Wege told Mic that her fear of pregnancy first kicked in during her teenage years, when the idea of losing control over her body, and subsequently her life, really took over. Like Sarah, she also used to Google her concerns about childbirth, namely regarding contractions and vaginal tearing.

"I still sometimes read articles about all the horrible things that can happen during pregnancy, with the same fascination that I read horror stories with or urban legends," Wege said. She usually goes on her weekly Google sprees when she's in what she calls a "phase," which is usually set off when someone she knows becomes pregnant or posts about the "miracle of childbirth" on social media.

A rational fear?: In a way, these Google horror stories calm Wege down because they help validate her fears. After all, pregnancy is dangerous.

"Tokophobia is not an irrational fear like it's usually described when defined," Wege said. "The truth is, up until very recently, [giving birth was] among the main causes of women's deaths."

She's not wrong. As of 2014, the maternal mortality ratio was 14 for every 100,000 live births in the United States, a small ratio in comparison to global maternal mortality rates, but one that has been slowly rising over the past few decades nonetheless. Further, life-threatening and painful complications, such as bleeding and infections, are common in 8.6% of vaginal births and 9.2% of C-sections.

Sarah also believes tokophobia shouldn't be considered "irrational" by any means. She's terrified of "medical intervention, especially if it's not necessary and excessive." Among her concerns are "the use of forceps, unjustified episiotomy and suction devices to literally, yank your baby out like it's some kind of kitten stuck in a drainpipe or something."

"At the end, mine is not a complete life, because I am child-free."

The isolation of tokophobia: Chacko and her partner have discussed her tokophobia at length. "There are times when his and my parents' despair [about not having grandchildren] weakens the resolve, but so far we stick with our decision," Chacko said of the choice to not have children.

However, sticking to her convictions can be terribly difficult and isolating — especially when her family members ask her whether she's planning to have children.

"I dread family get-togethers where nieces and nephews seem to be sprouting like mushrooms and everyone asking me when I am planning to have one," Chacko said. "No matter what I've achieved in life – the books I've written, the career I made, the interesting travels — at the end, mine is not a complete life, because I am child-free."

"What I find most difficult about having this phobia is just how cut off and isolated it makes me feel from other women sometimes,"  one woman on Reddit confessed. "Most of my female friends/acquaintances consider it to be a beautiful and magical experience, which I find very difficult to relate to in any way. Despite my best efforts, I often feel like there's something wrong with me; something broken that prevents me from being able to fully 'get' why I'm in such a minority."

Far from alone: The truth is, however, that tokophobic women aren't a minority at all; in fact, they're just one subset of the growing trend of women who are delaying or avoiding pregnancy altogether. Since the 1970s, the number of women who end their childbearing years without ever having kids has nearly doubled, according to the Pew Research Center. More and more, the trend shows women are delaying pregnancy until they've reached an older age — or perhaps delaying it permanently.

Alex Wege agreed that the number of women with pregnancy anxiety seems to be growing among those around her. Most of Wege's friends are in their 30s and don't have children — she suspects it's an upward trend. "I think that more and more women get informed about the realities of pregnancy and childbirth before they consider having children," Wege said. "And that scares them."

So where does the growing number of women terrified at the prospect of childbirth and happy to remain kid-less go? Many of these women have turned to online support groups or counseling for their fears. Experts suggest that tokophobic women pursuing a pregnancy seek counseling and look into C-sections, and that each hospital have midwives on staff for one-to-one care. Having that control over their bodies, whether these women go through with the pregnancy or not, is what helps quell anxiety over childbirth.

When Chacko first discovered online support groups for tokophobic women (she's a member of one on Facebook), she said, "I realized that I am not a freak of nature. I could give shape to my argument."

Sarah, who joined an online group and might consider childbirth or adoption with counseling in the future, agreed. "These groups help me to feel that I'm not alone in my fears," she said.